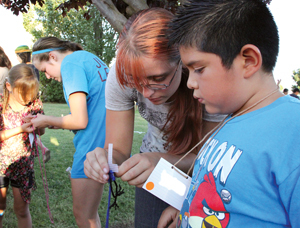 Hundreds of migrant workers come to Christ this summer

Nine hundred backpacks for $4.20 each.

And, the most significant number of all from this summer’s “Feeding Those Who Feed Us” ministry: 1,165 professions of faith.

The shoes and backpacks are among many items that Tom Stringfellow, who works year-round with the ministry, collects during the off-season, when they can be purchased at deep discounts. The items are held at a storage facility, then made available for churches and associations to distribute to migrant children during the summer.

In its 10th year, this ministry, born out of First Baptist Church of Beverly Hills where Stringfellow was pastor before becoming director of missions for Sierra Butte Baptist Association, continues to grow, particularly in the current baleful economy – and particularly in seasons like this summer, in which the harvest was delayed by an unusually cool and late spring.

“The weather made crops not mature enough to pick, and the delay had a real impact on workers,” Stringfellow said. “We went to lots of places where men were sitting around the home when they should’ve been out working. And sometimes the schedule we work off of put us in places before workers had even arrived. In Yuba City, for instance, the migrant center was only half full.”

Feeding Those Who Feed Us, which this year involved more than 130 churches, is conducted primarily at California’s state-operated migrant centers – an unlikely alliance at first glance.

Stringfellow explained that the first year, “I went to five locations before I found one that would let me on the gated property. We were giving away new shoes, shirts and pants to every child, putting food in the house and holding a Vacation Bible School. Finally, one center invited me back to a meeting … and had me present what we were going to do. They said if the migrants approve it, it’s okay with the state of California.

“Well, without hesitation, with a standing ovation, they approved it,” Stringfellow recalled. “State officials said it was okay so long as no one was forced.”

Only legal migrant workers, with families, are allowed to live in these centers, removing one potential complication involved with migrant ministry. Most centers host around 90 households, the majority of them two-bedroom units with five to six people per unit. Most families have two or three children under the age of 12 who must change public school every time their parents relocate, following the seasonal crops – from peaches in California to apples in Washington.

Feeding Those Who Feed Us retains its original.