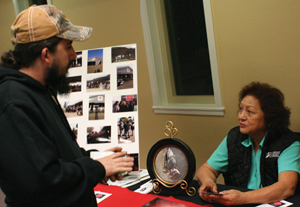 FRESNO – Encouraged to “Release and Restore,” several dozen participants at a recent human exploitation awareness conference learned about the proliferation of human trafficking throughout the United States.

Held Jan. 23-24 at Crosspoint Church in Fresno, the event featured worship, led by the Crosspoint worship team, interactive prayer, workshops and “opportunities to connect and make a difference,” according to Eva De La Rosa, California Southern Baptist Convention SENT specialist. The CSBC missions discipleship group sponsored the conference, which included a separate track for youth as well as exhibits from leaders of local ministries and government agencies.

Featured speaker was Kay Bennett, director of Baptist Friendship House in New Orleans, who has worked in homeless ministry some 26 years. She said that, along with the homeless, “traffickers look for the vulnerable and reel them in,” adding, “it is rampant – it is all around us.”

The accepted definition of human trafficking is,

Bennett has networked with the FBI, the Department of Homeland Security and local law enforcement to help rescue the exploited, reiterating that “human trafficking is happening everywhere.”

Using many illustrations and stories, Bennett said some caught in the trafficking web are children whose parents sell them for drug money.

But in ministering to the exploited, “Jesus Christ is the foundation you build everything off of.”

“Whatever gift God has given you, that is what He wants you to use” to help “release and restore,” Bennett said.

She cautioned those interested in helping to “think of it as one (person) at a time – because it is overwhelming” to take in the full magnitude of the issue.

Kendall Wolz, who works at Baptist Friendship House, led a separate track for youth about human exploitation, with a focus on the risks of social media.

Release and Restore concluded with a presentation by Sgt. Curt Chastain, who heads up the anti-trafficking unit of the Fresno Police Department. Chastain, who is a Christian, explained what is happening locally to address the issue, emphasizing the importance of the faith community’s involvement and the spiritual nature of restoration and redemptive healing that is needed.

Bennett also is encouraging interested individuals or groups to “adopt miles to pray for” along the I-10 corridor, where much of the transportation related to human trafficking occurs. For more information contact Bennett at 813 Elysian Fields Avenue, New Orleans LA 70117; 504-949-4469; or bfhjobs@aol.com.