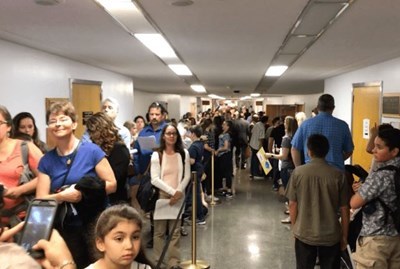 SACRAMENTO, Calif. (BP) — California homeschoolers converged on the state Capitol last week to voice opposition to a bill that would require state officials to collect and make public a list of families that educate their children at home.

After listening to three hours of testimony, no member of the Assembly Education Committee wanted to go on record supporting the measure by making a motion for a vote, effectively killing the bill.

Brad Dacus, president of the Pacific Justice Institute, called the bill’s defeat a victory well worth celebrating, especially in a state known for its regulatory penchant over every aspect of its citizens’ lives.

“All is not lost in California,” he said. “When we stand together, we can still make a difference.”

Assemblyman Jose Medina proposed the legislation after a high-profile child abuse case in Riverside. He initially wanted to require local fire officials to inspect every registered home school but dropped that provision after fire departments protested the additional workload. Medina continued to insist, even during last week’s hearing, that homeschoolers need better oversight.

“What we saw tonight was a massive victory for homeschool families, parental rights, and government by consent of the people,” said Jonathan Keller, president of California Family Council. “Thanks to the thousands of homeschool families and supporters who flooded the Capitol, legislators were reminded that this building is still the people’s house.”

California homeschoolers defeated another regulatory proposal earlier in April that would have required parents to get teaching certificates.

Lawmakers in Hawaii also attempted to adopt new homeschool oversight provisions earlier this year, proposing mandatory background checks for all homeschool parents. That bill died in committee after the homeschool community rallied to oppose it.