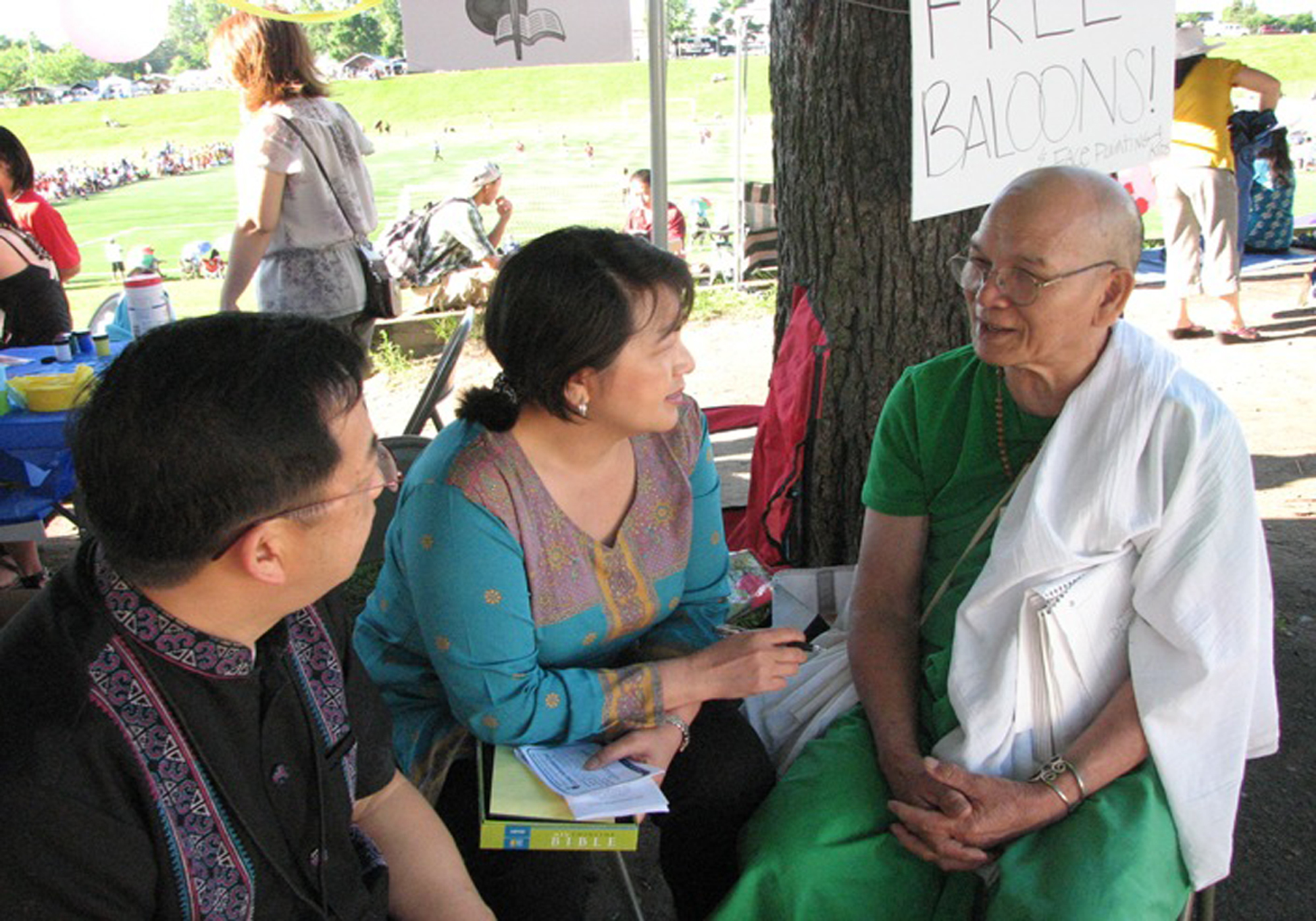 ST. PAUL, Minn. (BP) — A Buddhist monk was the first person to approach her booth in 2010, the year Lisa Vang began an outreach to the 30,000 or more people who annually trek to the annual Hmong International Freedom Festival in Como Park.

“I had never seen a monk before at the festival,” Vang said. “I told him, ‘Christ is the only way,’ and he said, ‘Yeah; I heard that before,’ and he accepted Christ!

“We pray, whoever God wants to save, let Him lead people to our booth, and they come,” Vang told Baptist Press.

Vang, a pastor’s wife in Irving, Texas, continues this ministry each year in St. Paul, Minn., where festival-goers are showered with love, care and inexpensive gifts — even some Gideon New Testaments — from Vang and a few helpers. And each year a hundred or more people make professions of faith. This year, it was 156, including a Hispanic couple visiting in the area who were drawn to the festival.

Major events related to the Hmong Baptist National Association (HBNA) took place in St. Paul in late June so attendees could also participate in the Hmong festival. The Hmong is a people group from southeast countries such as China, Vietnam, Myanmar and Thailand.

The Southern Baptist fellowship of Hmong Christians included a day-long retreat for pastors and their wives, a day of worship and celebration, and a day of business.

Worship at the Hmong gathering was led by La Herr, pastor of Life House Church in Columbia Heights, Minn., a Minneapolis suburb.

The theme for the Hmong’s annual meeting was “We are one in Christ,” from Ephesians 4:1-6.

“It turned out pretty good,” Xiong said. “Three hundred people came from all over the United States, Thailand and Vietnam.” This is up from last October, when 60 people met in Fresno, Calif., for HBNA’s 2016 annual meeting.

“This is my first year as executive director,” Xiong told the crowd. “I plan to visit all the local churches, but I plan to do something [else] first: I plan to build relationships with all the seminaries and colleges to get programs to help our leaders in local churches. If any local churches need training, I will help them to raise leaders in their churches.

“We are trying to build relationships with the different ethnic leaders, to help our Hmong people in their countries,” Xiong noted. “That is what we are trying to do.”

Business included election of officers and passage of a budget similar to last year’s $273,000.

The Hmong Baptist fellowship has two sources of income to meet its budget, said Sam Vang, newly elected president of the fellowship, and pastor of Hmong Baptist Community Church in Irving, Texas. The first is that each church tithe of its income to the Hmong fellowship. The second is asking individuals and families to give $4 each week to the fellowship in addition to their tithe to their local church.

Of the $4/weekly donation, $1 is allocated for overseas ministry, $2 for home ministry, and $1 for the fellowship’s budgetary needs. The $2 for ministry in the United States includes literacy, church planting, Christian education, leadership materials and materials for men’s and women’s ministry, in addition to an every-other-year retreat for pastors and wives and support new mission churches.

HBNA has three parts to its official documents: constitution, bylaws and policies. One policy was changed, so that the officers now have two-year terms, rather than the previous four-year terms. This means the national meeting, which previously took place every four years to conduct business, now is to be every two years.

No other business was conducted. In reports given, three Hmong churches started or joined the fellowship from other denominations in 2016, for a total of 58 Hmong churches cooperating with the SBC.

Plans have not been set for the 2019 national fellowship annual meeting. A training missions trip to Vietnam and Thailand is to take place in April 2018.


HBNA focuses its mission work in Thailand and Vietnam.

Vietnam has 40 Hmong churches; Thailand has eight, and needs several more. There is a future plan to have a training center in Thailand, on land given to the fellowship by the International Mission Board.

HBNA, through its Love and Care Ministries department and additional donations, builds 10- by 10-foot water tanks that are six feet tall in Vietnam. Pipes catch the water coming down the mountain and fill the tanks, which have a spigot on the side all people from the village — not just church members — can use to fill their buckets.

In the same location, toilets are built, with showers, and people can even do cold-washing of their clothes. The gravity-fed system refills overnight for the next day’s needs.

“She has been building more than 100 water systems and toilets,” President Sam Vang said. “We are a small organization but our God is not small, so we do a lot of things so other people can see the glory of God and His love.”

HBNA also provides theological education and leadership training for pastors and leaders in Vietnam and Thailand. Many men are called as leaders soon after their conversion, and President Vang knows what that’s like. He was a Christian for three months when he was called. Theological education was helpful to him, and he wants the same for other Hmong leaders, both in the U.S. and in Vietnam and Thailand, he said.