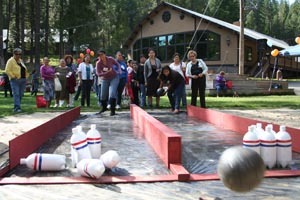 JENNESS PARK – Any time is the right time to tell the story of Christ’s work on the cross.

That was seen clearly during the Hispanic Ladies weekends at Jenness Park Christian Camp Sept. 16-18 and Sept. 23-25. Nearly 1,000 attended the “Time” themed retreats that focused on Ecclesiastes 3:1-8.

Colombian musician Luz Amparo blessed the women with worship songs and a concert. Despite a family member’s involvement in an automobile accident between the events, Amparo also participated in the second weekend.

Highlights included seminars, a prayer room and time-period costumes ranging from 1920’s-style evening gowns to 1950’s-style poodle skirts. On both Saturday afternoons, the Jenness Park staff treated the women to a carnival, with booths prepared by California Campers on Mission volunteers, complete with bowling lanes, ring-toss and dart throwing. Music and entertainment for the carnival were provided by the weekend’s guests.

In the middle of the first weekend, one of the group leaders was notified that one of the guests was missing much of the content from the sessions because she did not speak Spanish. Rather, the woman, who was invited to attend the retreat by a Spanish-speaking coworker, spoke Burmese as her primary language and English as her secondary language.

Lily (last name withheld), who has a Buddhist background, had intermittently attended Christian churches since her immigration to America. In an effort to befriend Lily, her coworker began to share life stories and invited Lily to the retreat weekend. Having never been to the mountains in California, Lily was interested both in the setting and the meaning of the weekend.

The group leader, who works with children at her church and who has a background in high school education, took Lily aside during one of the sessions and began to translate the messages into English. As the group leader explained the message, she began to feel the prompting of the Holy Spirit to ask Lily, “Do you know how to get to Heaven?”

After a confused look from Lily, the group leader took her aside and clearly explained the gospel.

While presenting the Good News of Jesus, the group leader used foundational questions: Do you know you have done wrong? Do you know Jesus died for your sins? Do you know this is the truth? Do you want to receive Jesus? Do you want to become His child? When the group leader received a positive response to each of the questions, she asked if Lily wanted to pray and become a child of God. She began to lead Lily in prayer, but Lily started addressing the Lord in her own words.

Because the group leader lives near Lily in the Bay Area, the women plan to meet to ensure Lily gets connected to a church that will help her grow in her life with the Lord.

Four other women also made professions of faith, with two more making decisions for Christ during the second weekend.