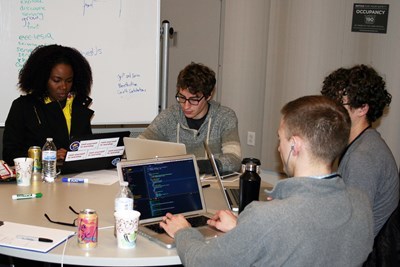 High-tech enthusiasts gather at Code for the Kingdom

Software allowing people to use cryptocurrency to give to churches was among the high-tech ideas under development at LifeWay Christian Resources during the Feb. 9-11 weekend.

LifeWay hosted its Code for the Kingdom event at its new Nashville campus where software developers worked long hours creating technology to serve the church.

Participants from across the country made 90-second pitches of their software ideas then formed teams to work on projects throughout the weekend.

“We knew we wanted to make collaboration easy,” Hill said. “We wanted this facility to be high-tech, and it is.”

Shamichael Hallman, a bivocational pastor from New Direction Christian Church in Memphis, Tenn., presented the idea of an app to help church members use their spiritual gifts.

“Once a person has taken a spiritual gifts assessment, I want to populate a list of church-specific ministries to get them immediately engaged,” Hallman said. “I think a lot of drop-off happens when people know their gifts but don’t really know what to do with them.”

— A social media platform to help people connect over topics related to sermons.

— An app for exchanging goods and services within the local church.

— An online directory of churches that contains sermon outlines and online giving information.

— An app to help with Scripture memorization.

To make the most of the time, several participants brought sleeping bags or worked all night. Teamwork with other believers made the extended hours enjoyable, they said.

“The tech industry can be really intimidating,” said Abby Fleming, a front-end developer from Lewisburg, Tenn. “Here, if you have a question, you can take your laptop to another team and ask for help. It’s not about competition, but collaboration.”

Hallman, a Code for the Kingdom organizer who’s been involved since the inaugural event in 2013, agreed.

“I’ve been to non-Christian hackathons where there’s a heavy emphasis on winning a prize,” he said. “Code for the Kingdom is more about helping others. I love seeing the cool projects that come out of it.”

While teams worked on their projects Saturday morning, LifeWay simultaneously hosted a Young Coders Workshop for kids in third grade and up. The workshop introduced kids to the basics of computer programming and encouraged an interest in electronics and robotics.

More than a dozen children worked in small teams with their parents to create robots they could control via smartphones.

“She’s into coding and robots and didn’t want to pass this up,” Ignatz said. “I’m having a good time too. I like watching the kids engage in team-building.”

Sunday, after an onsite worship service, the six teams finished their projects and assessed the results, using four criteria:

— Kingdom impact: Would this product serve the church and equip its people?

— Viability: Could this be a real, sought-after product?

— Innovation/originality: Is there a unique quality to the proposed software?

— Completeness: How far did they get with their project?

Their win encouraged them to stay in touch and continue their work together.

“There are a few tweaks we can make,” Bussard said. “We’re happy with the front end, and we will continue to collaborate online.”

Conference organizers were pleased with the weekend. “We hope they continue the projects — and these relationships — beyond the weekend,” said Adam Murray, a senior software engineer at LifeWay. “And we hope other people saw a project they liked and thought, ‘I’d like to see that make it to the finish line.'”

Kevin Old, a front-end architect who came on board at LifeWay through the 2016 Code for the Kingdom event, said it only makes sense for LifeWay to sponsor an event like this.

“We need sponsors like LifeWay who want to reach people for Christ,” Old said. “We have the technology, the space and the content. But in the end, it’s not about the software. It’s about the relationships and it’s about ministry.”