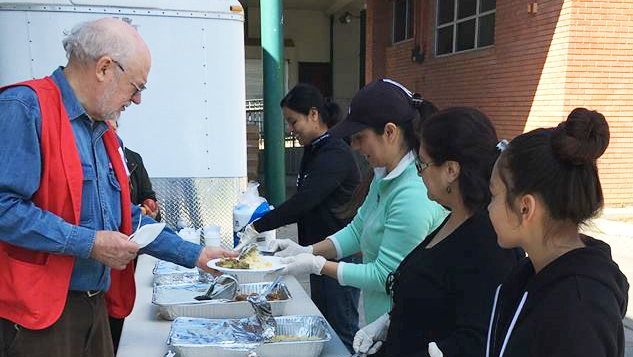 SAN JOSE — Pete Ramirez, pastor of White Road Baptist Church in San Jose, sounds like a broken record when he talks about his church’s ministry to recent flood victims.

A request for supplies from a shelter director at 11:15 p.m., resulting in a midnight run to Walgreens to empty their shelves of diapers, toilet paper, underwear and more? “Now we could go bless these people in Jesus’ name.”

Preparing Mexican food for the nearly 180 people who remain at the nearby shelter? “God placed us here at this time to bless them for such a time as this.”

Drafting a strategy to help several of the displaced families long-term? “God has opened a door for us to mobilize and love our community.”

Never mind the upheaval in schedules, the disruption of plans, the cost in volunteer hours, the cost in dollars, the long-term cost all around of meeting this need well beyond the short attention span of the media.

“Our hearts are with them,” Ramirez said of the displaced families. “We can’t leave them; we’ve cried with them, heard their stories, prayed with them, fed them, everything.”

The Feb. 21 floods in San Jose displaced hundreds of people, some of them escaping only with the clothes on their backs, more than 300 evacuated by raft. American Red Cross shelters began to open around the city to provide a dry roof, meals and a place to regroup until officials gave permission for residents to return to their homes.

“James Lick High School was the original location of the shelter closest to us, only a half-mile away,” said Ramirez, who has been a pastor for 15 years, eight of them at White Road. “There was no way we were not going to respond, it was just too close.”

The majority of the families at the shelter were Hispanic and Vietnamese — and here the point of blessing became immediately obvious. The two-mile radius around the church is 75 percent Vietnamese or Hispanic. White Road Baptist Church is bilingual but primarily Hispanic; a bilingual Vietnamese congregation also meets on their campus.

A local supermarket has provided meat, and women at the church prepare and take hot meals to the families at the shelter each day: about 12 families for a total of some 70 people. Because they have culture and language in common they’re able to listen, talk, encourage, pray and invite the families to their church. A few families have visited on Sunday; some have become believers.

The church has also served as a donation drop-off site for the community at large, sorting socks, shoes, diapers, coats, blankets and more, and taking the supplies as needed to the shelter. They have recently started collecting cleaning supplies for evacuees to use when they return home.

Although many of the families don’t have a home waiting for them.

“Most were living in middle- to lower-

class neighborhoods, most of them renting, and now they don’t have anywhere to go,” Ramirez said. “Some families that have met at the shelter are considering moving in together. So some of our church families are considering taking a few families in their homes for a couple of days. And we hope to help two families of believers who’ve been taking shelter at a church in downtown San Jose — really go all out helping them.”

In the meantime, the shelter now includes about 100 homeless individuals, many of whom have mental illnesses, addictions and other issues that make life in a shelter even

more difficult. Further, the shelter will only be open another few weeks.

The timing of the whole situation, Ramirez said, is indicative of God’s orchestration. Several leaders from the church had just that week returned from a SEND missions conference; the week prior to the flood Ramirez had laid out to the congregation a new vision for becoming a multiethnic church; the night of the flood was the same night of a meeting to plan the church’s upcoming mission conference; and Ramirez was in the midst of a sermon series called “Love God, Love Others.”

“It was all affirmation of God’s hand in our congregation calling us to go towards this direction,” Ramirez said. “God has allowed us to get to know and bless these displaced families. He has blessed us in that we’ve planned financially to bless, so we’ve not been limited in what we could offer.

“Our church has been very generous and giving.”

So members of White Road Baptist Church will continue to help: hot meals three times a week, gas and restaurant gift cards for those carpooling to their jobs, assistance with cell phone bills and more.

“Most importantly, we will continue to seek opportunities to take the gospel to those at the shelter,” Ramirez said. “This has mobilized and awakened within us a heart of compassion — that was there, but now has a venue to pour into. This is just the beginning of seeking and finding unlimited opportunities to be light in this dark world for the glory of God’s Name.”

Basically: be a blessing.