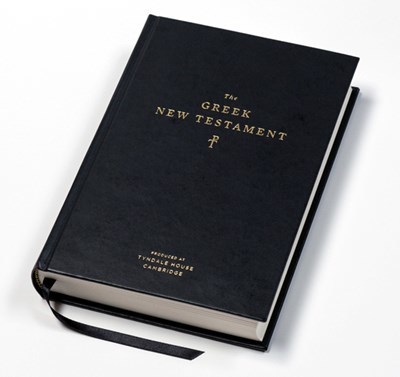 Released Nov. 15 by Crossway, the Tyndale House Greek New Testament (THGNT) aligns with the wording of previous Greek New Testament editions more than 90 percent of the time. But it utilizes unique spellings, book order and methods of indicating paragraph breaks that mirror the earliest available manuscripts and depart from the rendering of other modern editions.

“This is a solid edition of the Greek New Testament that deserves serious consideration when the text is being studied and the variant readings are being evaluated,” New Orleans Baptist Theological Seminary professor Bill Warren told Baptist Press in written comments. “The entire field of New Testament studies is enriched by this additional resource.”

Each edition of the Greek New Testament produced by scholars is an attempt to accurately depict the wording of the original books written by biblical authors like Peter, Paul and John. Because none of those original documents still exist, scholars attempt to reconstruct what they must have said based on thousands of available manuscripts produced over the centuries by scribes, who at times changed minor details in the text either intentionally or unintentionally.

All editions of the Greek New Testament agree on about 94 percent of the text, Southeastern Baptist Theological Seminary professor Maurice Robinson said via email, with no major doctrine affected by the variants. Many variants have no effect on English translation.

Yet the THGNT has several unique features, according to the evangelical scholars contacted by BP:

— Every reading in the THGNT must appear in at least two manuscripts, “one of which must be fifth century or older,” said Daniel Wallace, senior research professor of New Testament studies at Dallas Theological Seminary. That contrasts with the method of some popular Greek New Testaments, which, based on analysis of manuscripts, sometimes propose an original reading not contained in any known manuscript.

— Paragraphs are not indented “but have the initial letter extending into the left margin — something that no other edition previously had done, but following the actual practice found among Greek manuscripts,” said Robinson, research professor of New Testament and Greek at Southeastern.

— Paragraph breaks are based on “common divisions of the text in [early] Greek manuscripts” even if those divisions fall in the middle of verses, said Warren, professor of New Testament and Greek at New Orleans Seminary. Modern chapter and verse divisions did not appear until the 16th century.

— The order of books, Robinson said, departs from the standard order in English Bibles and mirrors that “found in the early manuscripts and canonical books lists”: Gospels, Acts, General Epistles, Pauline Epistles and Revelation. The one exception to the THGNT’s adherence to early Greek book order is its placement of Hebrews at the end of the Pauline Epistles. Many early manuscripts placed Hebrews between Paul’s letters to churches and his letters to individuals, Robinson said.

— At times, the same word is spelled differently in different parts of the THGNT, reflecting early manuscripts rather than standardizing spellings as in some modern Greek New Testament editions.

— The so-called “critical apparatus” — a section at the bottom of each page noting points at which biblical manuscripts differ — is more limited in the THGNT than in some other editions. The only variants noted in the THGNT are those that may plausibly reflect the original wording, those that are significant for interpreting the text and those that illustrate common practices of scribes, Wallace said.

Robinson said he probably “will not make much use of” the THGNT because he favors a different type of Greek New Testament text and a larger critical apparatus. But Warren and Wallace both commended the THGNT as a potentially useful tool for pastors to include in their exegetical arsenals.

“Our [Protestant] heritage was born out of a recognition that the responsible pastor must work with the Greek text,” Wallace said in written comments. “There can be no substitute, nor must there be any excuses. Here is a text that is both innovative and yet carefully based on ancient witnesses.”

Martin Luther, Wallace said, “chided the pastors of his day, arguing that it was a sin to neglect the biblical languages ‘when God is offering and giving us men and books and every facility and inducement to this study.’ How much more — with a thousand times the books and tools available today — do we lack any excuse?”