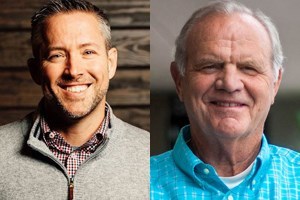 J.D. Greear and Ken Hemphill, both tapped as 2018 nominees for SBC president, made the joint appeal as the International Mission Board (IMB) and the SBC Executive Committee (EC) are tasked with finding new entity leaders. In the midst of the entity searches, Southern Baptists will elect national officers at the SBC 2018 Annual Meeting June 12-13 in Dallas.

“After speaking w/my friend @kenhemphill today, we’d like to call all Southern Baptists to act w/civility & integrity toward one another & to join us in praying for the entity transitions ahead & for the upcoming #SBC18 presidential election,” Greear, pastor of the Summit Church in Raleigh-Durham, N.C., tweeted April 5.

“In a phone conversation with friend @jdgreear we agreed to invite Southern Baptists to pray for leaders in transition, search committees, that our respective supporters will speak with grace and civility so we can leave Dallas revived, unified and focused on God’s kingdom,” Hemphill, an administrator at North Greenville University in Tigerville, S.C., followed April 6.

“These are difficult times for us all,” Greear told BP today (April 9), “but we must lock arms and boldly go forward to reach our world with the hope of introducing them to our Savior.”

“I am concerned that we will get caught up in peripheral issues,” Hemphill told BP, “and miss the critical issues such as baptisms, attendance, unity in diversity, the restoration of key partnerships, and the revitalization of our convention.”

In his April 9 email to BP, Hemphill listed the specific prayer requests (paraphrased below) that he and Greear discussed in advance of their tweets:

— Pray for Page and his family following his resignation from the EC;

— Pray for both search committees as they seek God’s direction for their respective organizations;

— Pray for the upcoming presidential election in Dallas;

— Pray that everyone, whether supporting Greear or Hemphill, speaks with grace and civility, discussing issues in a Christian manner;

— Pray that Southern Baptists will leave Dallas unified and revived.