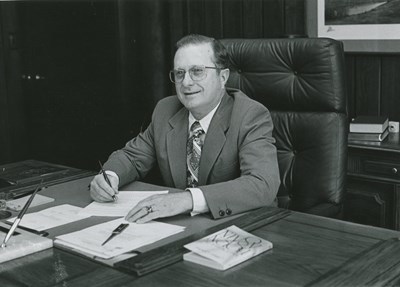 Cothen served as the state convention leader from 1961-66, when he was named as president of Oklahoma Baptist University (1966-70). He then was president of New Orleans Baptist Theological Seminary from 1970-74 before serving as president of the Baptist Sunday School Board (now LifeWay Christian Resources) from 1974-84.

When Cothen left California, Cecil Pearson, then pastor of First Southern Baptist Church in San Diego, said, “Only eternity will reveal the magnitude of the service Grady Cothen has rendered to the Kingdom of Christ by and through his ministry with Southern Baptists in California.

“Truly Dr. Cothen was ‘God’s man of the hour’ for us. His wise leadership and unselfish devotion to duty and people has been an unforgettable experience for pastors and people alike in our state.

“Truly Oklahoma’s gain is our loss.”

The first alumnus to serve as president, Cothen led New Orleans Seminary through a restructuring and helped launch a doctor of ministry degree.

Under his leadership, the Baptist Sunday School Board purchased the Holman Bible Publishing Company, now part of B&H Publishing Group, and enlarged its program of continuing education for ministers, among other accomplishments, BP reported in 1984.

Cothen was born in 1920 in Poplarville, MS. He received an undergraduate degree from Mississippi College, a master of Christian training from New Orleans Seminary and three honorary doctorates. He pastored churches in Tennessee, Oklahoma and Alabama.

His wife of 63 years, Martha “Bettye” Cothen, died in 2005. He is survived by his wife Mary Colmer Cothen and three children as well as grandchildren, great-grandchildren and a great-great grandchild.

A memorial service was held May 20 at the retirement home.