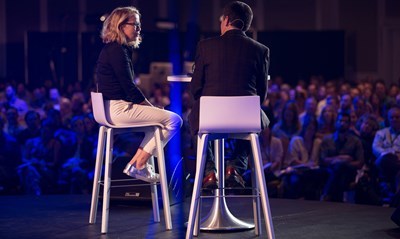 The ERLC dedicated its annual national conference to Christ-centered parenting and developed curriculum on the same subject during the year. The other issues that marked the entity’s work included religious liberty, racial reconciliation and the sanctity of human life.

At the national conference in August, ERLC President Russell Moore said parenting is about cross bearing.

“A cross-shaped parenting means our children are going to understand our goal for them is not that they be successful or impressive the way the world defines it,” Moore said. “Our goal for them is that they would be like us — crucified with Christ and therefore alive with the presence of God forever.”

The ERLC’s fourth annual national conference — “Parenting: Christ-centered Parenting in a Complex Word” — attracted about 1,300 attendees. Speakers at the three-day event in August called parents to rely on the Gospel, exercise grace-powered effort and become the people they want their children to be like.

The ERLC collaborated with LifeWay Christian Resources to produce two small group studies — one on parenting and the other on religious liberty. The six-part studies feature videos of various speakers addressing the Gospel’s application to both topics.

ERLC, Focus on the Family again host Evangelicals for Life

More than 50 speakers addressed abortion and other issues regarding the sanctity of human life during the second Evangelicals for Life conference co-hosted by the ERLC and Focus on the Family in January. Participants joined tens of thousands of others for the annual March for Life in Washington, D.C., during the conference.

Moore and other Southern Baptist leaders repudiated racism and urged prayer after an August rally sponsored by white nationalists in Charlottesville, Va., resulted in violence and death. The protest and counter-protest came two months after messengers to the annual SBC meeting passed a resolution condemning “alt-right white supremacy.”

Religious freedom advocates gained a victory at the U.S. Supreme Court when the justices voted 7-2 in June for the right of a church to participate in government programs with secular purposes. The ERLC filed a friend-of-the-court brief in support of Trinity Lutheran Church of Columbia, Mo.

The U.S. Senate voted 54-45 in April to confirm Neil Gorsuch, Trump’s first nominee to the Supreme Court, to fill the seat left vacant by the death of Associate Justice Antonin Scala 14 months earlier. Moore commended Gorsuch and his confirmation.

The Trump administration provided a major conscience-rights win for Southern Baptists and others in October by issuing new rules to protect employers who object to the abortion/contraception mandate implemented by Obama. A federal judge blocked enforcement of the rules in December, however, with a nationwide injunction.

The Supreme Court heard oral arguments in December in an appeal by a Colorado cake artist who was penalized by the state for refusing to design a wedding cake for a same-sex ceremony. The ERLC filed a friend-of-the-court brief supporting Jack Phillips in what appears to be a pivotal religious freedom case.

The ERLC joined other adoption and pro-life advocates to urge Republicans to restore the adoption tax credit in their tax reform legislation. In response, congressional leaders inserted the longstanding benefit for adoptive parents in the proposal.