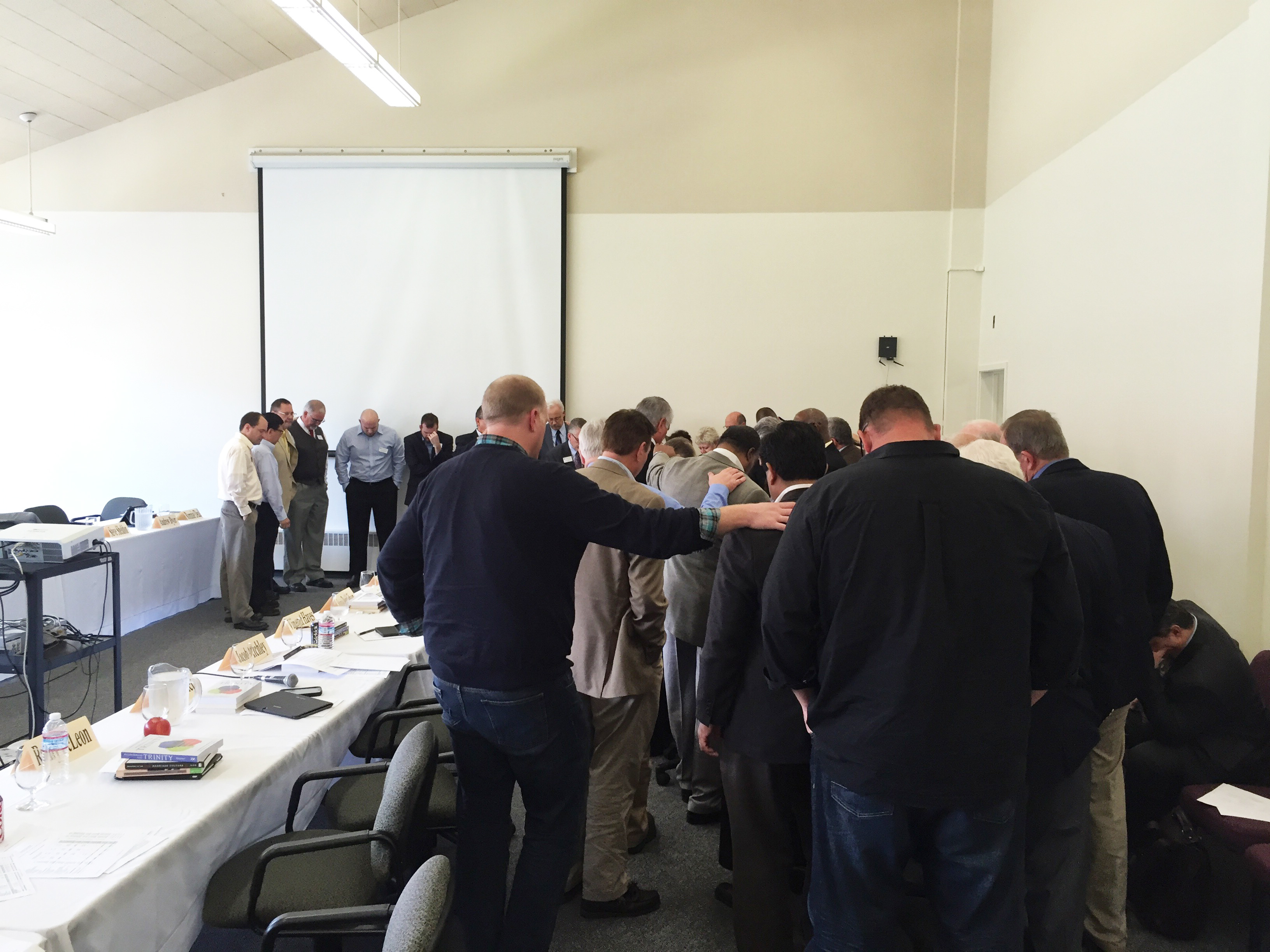 MILL VALLEY — Meeting for the last time on the Mill Valley campus April 11-12, the board of trustees of Golden Gate Baptist Theological Seminary approved five new faculty members, heard progress on two new campuses, adopted the 2016-17 budget and prayed for Seminary personnel as they move toward the transition to Ontario and Fremont.

In describing the faculty selection process, President Jeff Iorg emphasized the board’s role in making so many high quality faculty additions possible, including setting long range goals for improvement in faculty compensation in 2010.

The board also granted senior faculty status to Gary McCoy, who retires at the end of the spring semester. Both McCoy and Don Beall, national director of the Contextualized Leadership Development program, were recognized during a dinner following the board meeting.

Rick Durst, director of the Bay Area Campus being constructed in Fremont, told trustees the regional campus will first open in Mill Valley as a commuter campus while buildings are being completed in Fremont.

“We have developed class schedules for the fall,” he said. “Our staff and faculty are ready to welcome new students in Mill Valley until our new building is completed.”

The Bay Area campus will maintain the seminary’s presence in the San Francisco Bay area, where students, faculty and staff have served in ministry since the Seminary’s founding in 1944.

Iorg asked trustees to pray new students would enroll at the seminary’s Ontario campus, for many new employees and relocating employees who will establish the new location, and for patience and flexibility as many organizational changes are implemented at the new campuses.

“The changes we have made in our operational strategy by building two new campuses — with a very different model than traditional seminaries — are paying off with more than $2 million redirected internally from maintenance to ministry,” he said.

As part of his report, Iorg reminded the board that “when we conclude the construction projects and relocation — all debt free — we will own two anchor campuses in prime locations in California worth about $52.5 million, own a development lot in Ontario worth $4 million, own a building in Brea worth about $4 million, own two apartment complexes valued at $8 million and have added $40 million to our endowment. Besides all this, we have significantly increased faculty and staff compensation, added new faculty and key staff positions and completely rebranded our seminary.”

Iorg reported requests from Golden Gate Seminary alumni who wish to be acknowledged as Gateway Seminary graduates will be honored by the institution. He said the formal process will include a written request to the registrar and a small fee, which will result in a Gateway Seminary diploma being issued.

“Students and alumni are responding in a variety of ways to the name change,” Iorg said. “Some students have slowed their academic process so that they can be in the first graduating class at Gateway Seminary. Others have rushed their process to be in the last Golden Gate Seminary class. In May, we will see a large graduating class, mostly because these students want Golden Gate Baptist Theological Seminary on their diplomas as part of the final class.”

Besides the two campus facilities nearing completion, Iorg also reported two apartment complexes near the Ontario campus had been purchased and are being renovated. The 58 units, which include one- and two-bedroom apartments, will be available for occupancy by July 1.

The board viewed photos of the interior of the Ontario building and prayed for the move, which is scheduled to take place in less than 60 days. Trustees surrounded staff present at the meeting and prayed for guidance as the Seminary moves toward ‘a new future.’

“The budgeting process is never easy,” commented Stuart Smith, chair of the business services committee. “This year’s budget is very complex, with a lot of moving parts to it that comes along with the transition to two new locations. The team that put it together has done a wonderful job — especially with so much uncertainty about future operations.”

Iorg added that the Southern Baptist Convention’s Cooperative Program is still the Seminary’s foundational revenue stream and encouraged the trustees to promote the Cooperative Program at every opportunity. The board also reviewed other income sources from donors, investments, tuition from traditional students and those enrolled in the online program, which has rapidly grown since its founding. For the first time, the Seminary included proceeds from the $40 million Land Sale Endowment in its regular operating budget.

During a historical reflection about his service to Golden Gate, William Crews, president emeritus, noted the first trustee meeting was held on March 31, 1944, just over 72 years ago, and marveled at what the next 72 years might bring. Crews has attended every board meeting except one since 1984.

“We began thinking of this move when I was president,” he said, “but God chose to bring it to fruition at this moment in time. It’s the right decision at the right time and has my full support.”