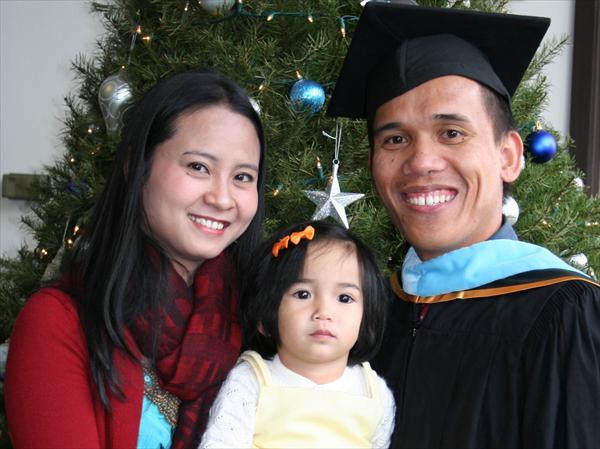 MILL VALLEY (BP) – When Rico Marquez contracted polio in his childhood and was unable to walk, he literally crawled to school each day.

“When I was 6 years old, I contracted polio. I wasn’t a Christian then and my life was filled with fears, gloom and hopelessness because I couldn’t walk,” said Marquez, recalling his early years growing up in rural Philippines. “It’s hard crawling for a mile just to go to school. And people laughed at me and called me names.”

His life changed at age 14 when a classmate told him about Jesus.

“It comforted me knowing that God loves me in spite of who I am,” Marquez said. “Jesus brought me hope and significance.”

“Once I accepted Jesus Christ as my Lord and Savior, I no longer needed my crutches,” Marquez said. “I have a definite limp but am able to walk and even run on my own.”

But the young Christian was ostracized and persecuted by his father, who evicted him from home. Marquez’s mother had just died and his eight siblings treated him badly.

“The Lord provided me with the support of my newfound family – my church,” Marquez said. “The pastor invited me to live with him, but because he had a large family of his own, all he could provide was a wooden shed in his backyard. I lived there for three years while I attended high school.”

“I really enjoyed doing God’s work,” Marquez said. “While in my senior year in high school I sensed the calling of God … to enroll in Bible college and become a pastor.”

He tried to reconcile with his earthly father, to no avail.

“The day I graduated from high school I went back to my father’s house to tell him I was graduating and to invite him to attend the ceremony,” Marquez said through tears. “He was sitting with his friends, drinking and smoking. He laughed at me and told me to get lost. I was so sad.”

After graduation in 1996, Marquez entered Baptist Theological College in Mandaue, in the province of Cebu, Philippines, and earned a bachelor’s degree in theology. While there, he walked to three towns a week, on average, to preach and share the gospel.

“I learned a lot and was exposed to many places and different people in Central Visayas,” he said. “God taught me to be courageous in sharing His Gospel to Filipinos.”

Marquez continued to intercede for his family.

“I prayed for them regularly, and during my internship, four of my siblings came to know Christ,” Marquez said. “My father listened to the gospel and considered God’s promises.”

When Marquez’s father attended his graduation from Bible college, it was a mixed blessing.

“This time he did come, which made me so glad. But he was drunk and only stayed for the commencement. He didn’t stay to celebrate with me but left that same day, even though his home was on a different island,” Marquez said. “I was alone and had no one with which to share my accomplishments.”

Despite the dangers, Marquez knew that “where the Lord leads, I should follow. He led me there and gave me an opportunity to train and equip pastors and church leaders in that area. In the midst of fears and uncertainties there was joy in my heart as I served the Lord.”

Marquez was ordained on May 4, 2003, and during his six years of fruitful ministry there, he met and married his wife Margie.

“It was an encouragement when I learned of a rebel who became a preacher to his own tribe. But my heart was aching to see those shepherds leading sheep without proper training. I prayed that somehow a Bible training center for pastors would be established in this area, and God has granted our prayers,” Marquez said. “My home church made a commitment to be the training center in spite of the dangers in the area. There were 16 graduates last year!”

Golden Gate Baptist Theological Seminary
Called and sponsored by Trinity Faith Baptist Church in Rodeo, Marquez and his wife moved to California in 2008, and the next year he applied to Golden Gate Seminary. Although he didn’t have the funds, Marquez was accepted into the master’s program and his tuition was paid anonymously the first year. He has received financial aid each semester, and collected empty bottles in the area and sold them to raise money for his textbooks, gas and bridge toll fees.

Now 33, Marquez is the father of two and works from midnight to 9 a.m. as a janitor at the seminary. Taking five or six classes each semester, he earned a master of divinity degree last June and a master of educational leadership in December.

“God has gifted me with the gift of teaching. I started teaching when I was 16 years old. I have been a pastor since 1998,” he said. “I have pastored five churches since then.”

Since his wife is enrolled at Golden Gate to earn a master of educational leadership degree, the family continues to live on campus.

“What prompted me to enroll at Golden Gate Seminary is the passion and calling God has put in my heart,” Marquez said. “I want to be used by God to train more pastors and church leaders in Mindanao and to set up a Bible school there. I came to Golden Gate for a multicultural, contextual education.”

Years after his father rejected him, the two are now reconciled.

“I want to share the gospel in person with my father so he will understand. I want to see him smile, and erase the sound of him telling me, ‘You are good for nothing. You are not my son.'”

Marquez said of an upcoming trip to the Philippines to see his father again, “I am friends with my dad now. His persecution made me strong, and today he is proud of me.”