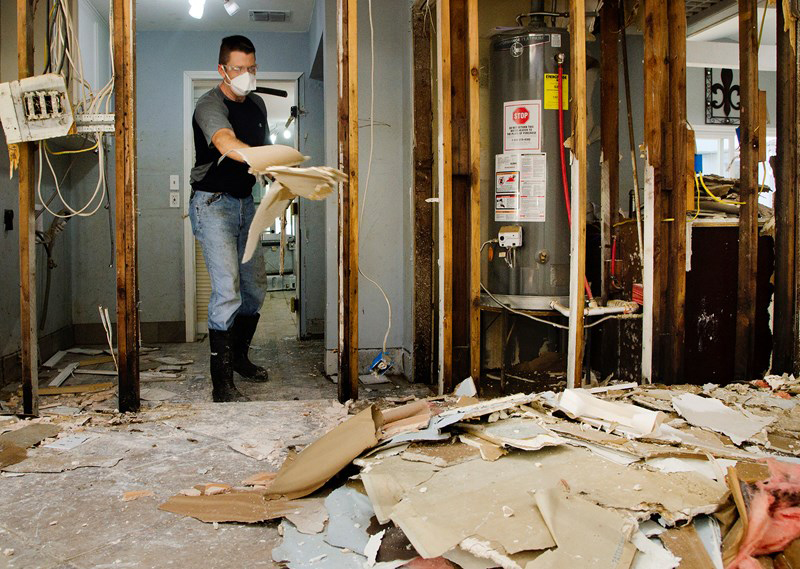 Floodwater from Hurricane Harvey had climbed more than six feet inside his home; it was chest high when he managed to escape with his wife Diana, 63, and their toy fox terrier. They had flooded twice before but never this badly. They knew when they left that they would probably lose almost everything they owned. And the sight when they returned confirmed it.

“I spent three days trying to figure out what I had done to make God so mad at me,” Matlock said as he watched SBDR volunteers carry items to the curb. “I’ve lived a pretty moral life. And [the hurricane] affected all of my immediate family and my wife’s family in Louisiana.”

His spirits were immediately lifted when he saw that he had not been forgotten by God — in fact, he was being helped yet again. When the SBDR trucks roll into the driveway, his first thought was to grasp the volunteers’ hands and join them in a prayer of thanksgiving.

For thousands upon thousands of homeowners like Matlock in Houston and along the Texas Gulf Coast, Southern Baptist volunteers are on-site or making plans to be there to add their labors and share their faith.

Through the North American Mission Board, information on volunteering or making a donation can be found at namb.net/Harvey.

The Southern Baptists of Texas Convention, meanwhile, is working to mobilize churches and volunteers through what is being called Texas Relief, online at www.sbtexas.com/Harvey.

TXR is “specifically a part of sending volunteers to areas that need help who are not disaster relief-trained,” explained Lance Crowell, SBTC church ministry associate who is helping lead the initiative.

Crowell said the SBTC is aiming to mirror how the North American Mission Board mobilizes churches and volunteers through its Send Relief ministry.

“What NAMB is thinking nationally about Send Relief we were trying to develop our own avenue in Texas,” Crowell said.

The SBTC also has organized a “Buckets for Harvey” effort to fill five-gallon buckets with cleaning supplies for flood survivors. Information is available also at www.sbtexas.com/Harvey.

The Baptist General Convention of Texas, a second state convention in the state that partners with the Southern Baptist Convention, also has a webpage recapping volunteer and giving channels, www.texasbaptists.org/harvey-response. Included are deployment opportunities through Texas Baptist Men and through the convention’s BOUNCE student ministry.

At the Matlock home in Houston, SBDR unit leader Brian Batchelder, whose unit is with the SBTC, said the couple knew what needed to be done but had no idea how to do it alone.

“We provided the how,” said Batchelder, who attends Broadview Baptist Church in Abilene, Texas. “People need to see Jesus in the middle of a crisis. That’s why we come — so people can see what Jesus means to us and how He can help them.”

When Matlock teasingly asked volunteers not to scratch his ruined truck, Batchelder knew the homeowner was beginning to find hope.

A smaller moment encouraged volunteers Linda Parker and Glenda Warren, both of Mission Dorado Baptist Church in Odessa, Texas. When they arrived with the SBDR mud-out team, they first found Matlock almost in tears and despondent. No one had touched anything, and the stench of mud and mold was overwhelming, even with a mask.

The only thing Matlock wanted to find was his father’s 1942 class ring from Oklahoma Baptist University. Matlock kept it on his nightstand in a handmade wooden box, but everything in the room had been scattered by the floodwater. Together, they scoured the room, finding the ring as well as a large container filled with photographs that somehow had been untouched by the flooding.

“Little things like that are irreplaceable,” Parker said. And, she said, “Just the fact that someone was doing something took the burden off his shoulders.”

SBDR volunteers say they try to serve as the hands and feet of Jesus, easing the spiritual burden as well as the financial through providing cleanup aid at no cost.

“These folks have lost everything,” Batchelder said. “It just breaks my heart to take all their stuff to the curb and to have to pay someone to do that….”

Batchelder’s voice broke as he recalled his first volunteer experience, following Hurricane Katrina on the Mississippi Gulf Coast. At the end of every project, he and the volunteers signed a Bible and gifted it to the homeowners as a tangible reminder that they are never alone.