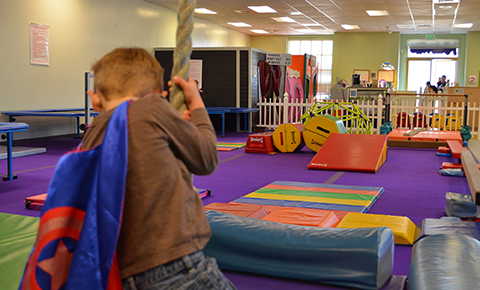 CARLSBAD — When church planter Cody Wallace pulled into the parking lot of a derelict movie theater in Carlsbad to pray, he couldn’t have guessed that his church plant — Journey Church North County — would soon be meeting in that facility rent-free.

“When you’re a church planter, you tend to pray over empty buildings,” Wallace said. “You just never know what could happen.”

Wallace’s journey as a church planter began seven years ago when he and his wife, both Southerners, felt God calling them to start churches in the West. Since neither of them had been west of West Virginia, the move seemed impractical. But they knew God was calling them to go.

“So we packed up a trailer and drove out to Sacramento,” Wallace said.

With few resources and no contacts, they struggled to adjust to life in California. They rented a tiny apartment and slept on a leaky air mattress.

“As a church planter, you tend to hear the victory stories but not all the ways things can go badly,” Wallace acknowledged. “It was just a lot harder than we thought.”

But everything changed when they relocated to Oceanside and met Jim Britts.

“Jim set us back on track,” Wallace said.

Britts asked Wallace to serve as his associate pastor, and together they started Parkside Church. It grew rapidly, and they baptized 75 people in the first year.

“About a year-and-a-half ago, Jim came to me and said, ‘I think you should consider planting again,’” Wallace said. “So my wife and I prayed it over and decided God still wanted to do something with us through church planting.”

As Wallace hunted for a facility where his congregation could meet, he began to pray over every vacant property in the area.

“Two months after I prayed over the abandoned theater, my friend Shawn decided to buy a building (in Carlsbad) for his laser-tag business. And he just happened to choose that theater,” Wallace said. “He said our church could use one of the four theaters for free. That was incredible.”

The only problem with the theater setup was that there was no designated space for kids, and many of Wallace’s launch team were parents of young children.

But the solution turned out to be closer than anyone thought. Located next to the theater is a children’s play gym called Kidsville.

“I woke up my wife in the middle of the night, which she wasn’t too happy about,” Wallace said with a chuckle. “I told her I thought we were going to get Kidsville too.”

Wallace met with the owner, a middle-

aged Serbian woman, and she agreed to rent the gym to the church on Sunday mornings.

Wallace was thrilled with the solution but grew concerned when she called him for another meeting two months later. She told him she wanted to retire and offered to sell him the business.

“My wife and I never planned to own a kids’ play gym, but we bought it,” Wallace said. “So now we own a play gym that’s open every day.”

With the church plant meeting in a theater-turned-laser-tag complex and the children’s ministry housed at the neighboring play gym, Wallace acknowledged that his church’s setup is unconventional. But he said it works well and provides vital links to the community.

“Between Kidsville and the laser-tag, we have opportunities to meet a lot of young families we wouldn’t meet otherwise,” Wallace said.

In the short time since the church officially launched, Wallace has shared the gospel with many community members, and has done several baptisms.

“We wanted to create a church that has an impact,” Wallace said. “Having a business that is essentially part of our church and meeting in a renovated theater was not something we planned. But it’s been really good so far.”