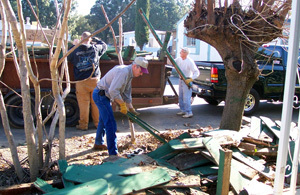 VACAVILLE (BP) – The 300 or so people who worship on Sunday morning at Trinity Baptist Church know that 20 percent of their offerings go to missions, the bulk of it given through the Cooperative Program of the Southern Baptist Convention.

Giving through the Cooperative Program
“We like the broad strokes of ministry in the area of equipping through seminary education, to being on the field directly, reaching the world for Christ,” said Milton Steck, pastor since 1971 of the Vacaville congregation. “I don’t know of another method or giving program that is as effective around the world.

“The world is coming to California, and a portion of our Cooperative Program giving stays in California,” Steck said. “We just have an excitement in knowing that every time we send a check out, we know we’re supporting missions globally and in our state.”

Trinity finds excitement in hands-on missions as well as giving to and praying for Southern Baptist missions. The church gives 14 percent of its mission donations through CP, a fund allowing churches to support the outreaches of the SBC and its state conventions.

“We live off 80 percent and give 20, and we believe part of that is related to this church being debt-free,” Steck said. “Everything is paid off within 30 days.”

“California has so many smaller churches that are not able to provide a retirement program for their pastors,” Steck explained. “We believe it’s important to provide for those faithful servants of the Lord.”

But that’s only part of the church’s focus.

Ministering to community
“The Lord has blessed us with nice facilities. Our challenge now is to go deeper in outreach in our community,” Steck noted. “Families are in such need today. We feel we’ve got a lot of responsibility here, church-wise.”

When Steck and his wife arrived in Vacaville in 1971, fresh out of Golden Gate Seminary, it was a sleepy town of about 22,000, and Trinity Baptist Church had 75 members. As the town has grown to 100,000, the church draws 300 or more to Sunday worship.

“It’s been a real joy to be part of a family-oriented community,” Steck said. “Now I have the joy of seeing as many as four generations that have grown up in the church.”

Vacaville’s population also benefits from the transitioning workforce at nearby Travis Air Force Base.

“That was a frustration in the beginning, but God straightened me out,” Steck said. “There are literally thousands of folks around the world now from here.

“The outreach is so different today,” he added. “You’re not welcomed into some homes where the need is the greatest. We deal with domestic violence and divorce and needy families. There are about 50 churches in our community but the vast majority don’t have anything to do with God.”

Steck has been a member of the local Rotary Club for 40 years and often involves the church in Rotary projects, such as the recent purchase of teaching materials to show how even minimal shaking harms infants’ brains. The church helped Alpha Pregnancy Resource Center purchase an ultrasound machine for its mobile unit, used at area schools and on church property.

Congregation ministries
Local ministries include a midweek Awana program complete with a free hot meal for participants and their families, many of whom are unchurched residents of nearby apartment complexes. The church hosts a Thursday morning Bible Study Fellowship, attended by about 300 women, and on Tuesday nights, the church’s gym is available for open-court basketball as a community outreach.

In cooperation with a local Hispanic congregation, Trinity also ministers to migrant workers, and the church’s live nativity drew about 3,200 people over three nights last year.

Trinity members trained in Southern Baptist Disaster Relief have responded to disasters in California and other states. The church has sent work groups three times to the Copper Canyon area of Mexico to build a hangar for Mexico Aviation Mission, which serves the local Tarahumara people.

Educating members
“We periodically show videos, have missionaries in our church, use monthly bulletin inserts and prayer requests from the mission field every week – both (the North American Mission Board) and (International Mission Board),” Steck said. Those things help keep the congregation “globally-minded of the need of the world to hear the gospel message. And besides, being involved in missions is a motivation to give to missions.

“We have a strong financial system that has a great deal of accountability and reports on a weekly basis,” Steck said. “I think God uses a lot of Christian churches and groups but I don’t know anywhere else with such a great system of accountability. I’m very thankful for the integrity we operate with and the accountability we have.”

Steck has an insider’s perspective. He served for eight years on the IMB trustee board and eight years on the SBC Executive Committee. He was president of California Southern Baptist Convention and served two terms on the state’s executive board.

“All those connections have been a tremendous blessing and it blesses the church as well,” Steck said. “God has planted us here and we’ve been richly blessed. Let’s not lose sight of being a blessing to others.”