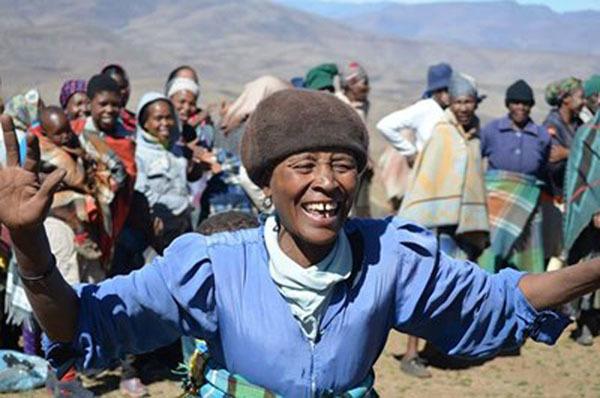 — California: A man who received a Bible later confesses he had been contemplating suicide and changed his mind because of what he read in Scripture.

— Lesotho: A severe drought ruined a woman’s crops and left her little seed to sow for the next season. Then a truck arrived in her community, filled with seeds purchased by GHR funds. This woman then walked an hour to tell her friends at church.

— New York: An ex-con wanted nothing to do with church but his attendance was mandated at a program supported in part by GHR resources. His heart was touched by the way he was welcomed, however, and now he preaches the Gospel.

— Ohio: A pregnant young woman changed her mind about getting an abortion and joined a Bible study group.

— Africa: Semiha worried about keeping her baby healthy after her husband left their town in search of work. She was forced to flee her home because of turmoil in the country. But GHR food aid helped them survive and the baby continued to grow.

— Texas: Children whose families had been helped by a food pantry decided to start a clothes closet to help others.

— Overseas: Dora was abandoned at birth by her mother, but by God’s grace a friend of GHR discovered her. She adopted Dora, and a hunger ministry is providing milk that helps her grow up strong and healthy.

— New Mexico: Hot lunches support a sewing program that helps homeless and recovering women get back on their feet.

Reports from across North America revealed:

In the final quarter of 2016 — when many Americans are acutely sensitive to food scarcity — Southern Baptist hunger ministries in North America reported:

— Southern Baptists in Florida conducted the most hunger relief projects (158) and witnessed the most baptisms (469).

The Southern Baptist initiative offers a unique advantage to donors by being able to promise 100 percent of each contribution will be used to meet hunger needs. Nothing is withheld for administrative overhead or promotional costs. Some humanitarian organizations keep between 30 percent and 70 percent of donations for administrative expenses.

GHR is able to focus donations on meeting needs because overhead expenses are covered by the Cooperative Program, Southern Baptists’ unified plan of giving through which cooperating Southern Baptist churches give a percentage of their undesignated receipts in support of their respective state convention and the Southern Baptist Convention missions and ministries. Other expenses are covered by the SBC’s two missions offerings, the Annie Armstrong Easter Offering for North American Missions and the Lottie Moon Christmas Offering for International Missions.

Worldwide, nearly 800 million people live with constant hunger. More than 24,000 people — over half of them young children — die every day from illnesses that could have been alleviated by basic nutrition.

Information for the report was provided by the International Mission Board, North American Mission Board and Baptist Global Response.

More information about Global Hunger Relief is available at globalhungerrelief.com.