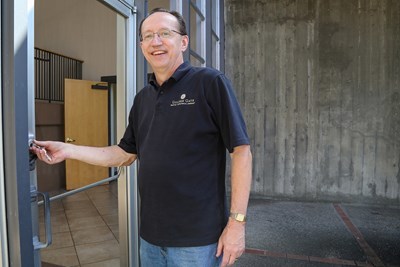 MILL VALLEY, Calif. (BP) — Following the relocation of its main campus to Southern California, Golden Gate Baptist Theological Seminary will retain a presence in the San Francisco Bay area by opening a new campus in Fremont, Calif., on land donated by a local congregation that is moving to a house church ministry model.

The new campus will be situated just north of San Jose about 50 miles southeast of the present Mill Valley campus.

Mission Way Baptist Church in Fremont, announced that it will donate to the seminary land valued at $2.9 million. Golden Gate plans to replace the existing church facilities with academic buildings and has already begun the process of obtaining construction permits. Construction is set to begin soon, though no date was announced for the opening of the Bay Area Campus.

“We are committed to training students in the American west and the Bay Area,” Golden Gate President Jeff Iorg said. “We have been given a generous gift of land in a prime location that will become our new Bay Area Campus. I am amazed at how God continues to bless our school during our relocation efforts.”

Iorg has said previously that the target date for Golden Gate’s main campus relocation to Ontario, Calif., just east of Las Angeles, is June 2016. When Golden Gate finalized the sale of its Mill Valley property in July 2014, administrators stated that the sale agreement allowed the seminary to remain fully operational in its current facilities for two years.

Mission Way pastor Larry Floyd said the congregation had been praying about how God wanted it to use its former building in light of the shift to a house church ministry model. The land and facility are “kingdom property that we are just passing along,” Floyd said.

“Our mission is to bring the Gospel to the world, so giving the property to Golden Gate Seminary absolutely fulfills that goal by training and sending students around the globe,” Floyd said.

Iorg said the Fremont campus will be “a second state-of-the-art campus in California — mirroring what we are creating in Southern California. These two new campuses will anchor seminary training on the West Coast for Southern Baptists for years to come.”

In other news, Iorg announced the appointment of Rick Durst as director of the Bay Area Campus effective Jan. 1, 2016. A professor of historical theology, Durst has served previously as inaugural director of the online campus, vice president of academic affairs and director of the Southern California Campus.

“Dr. Durst is a visionary leader who will help us train Bay Area students for the work of the Gospel,” Iorg said. “For years, every time Golden Gate has needed an innovator to start something new, we turn to Rick Durst. His passion for the Bay Area is well-known and his leadership gifts well-proven.”

In accepting his appointment, Durst said, “Golden Gate Seminary has been very gracious to allow me to serve in a variety of leadership roles over the years. I love startups, whether it is a new church, program or campus. The Bay Area Campus will offer the seminary’s high quality theological training, specifically designed to ensure the expedient progress of commuting students’ degree programs.”

Iorg also announced a core faculty at the new Bay Area Campus that will consist of six professors currently teaching at the Mill Valley Campus.

“With Durst’s leadership and this cadre of highly qualified faculty, our commitment to the Bay Area is made clear,” Iorg said. “While we are moving our primary campus to another location, we will continue to train leaders from and for this area for years to come.”

Golden Gate began its relocation process April 1, 2014, by announcing the sale of the Mill Valley Campus. Having finalized the sale for $85 million in July, the seminary purchased a six-story building in Ontario to serve as the new primary campus. The building was constructed in 2009 and has remained vacant due to the economic downturn. The building’s exterior is finished and all mechanical systems have been installed, but its interior is unfinished. Construction of the interior is expected to begin soon.

The seminary intends to add around $50 million to its endowment after completing the two new campuses in Ontario and the Bay Area.

Golden Gate is in the process of requesting approval for a name change to Gateway Seminary of the Southern Baptist Convention. The new name will require approval at two consecutive SBC annual meetings, beginning in 2015 in Columbus, Ohio.