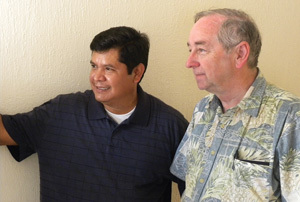 TIJUANA, Mexico – Jimmy Kennedy and Michael Carr wrote a popular song describing a trip to Mexico called “South of the Border” for a movie of the same name. The love song was published in 1939 and sung by cowboy star Gene Autry. The song portrays a senorita in sweet, sentimental hues.

That 70-year-old song doesn’t seem to characterize the Mexico we read about today.

The headlines coming out of this sprawling border metropolis in the last few months are alarming. Consider some of the more recent: “Border Strife Escalating in Tijuana,” “15 Dead in Tijuana Shootout,” “Under Violent Siege, Tijuana’s Elite Flee,” “12 Bodies Dumped Near Tijuana School,” “Marines Warned Tijuana Too Dangerous for R&R” and “4 Americans Strangled, Stabbed in Tijuana.”

It is the largest city on the Baja California peninsula. Its 3.2 million population in the greater metropolitan area places it as the nation’s fourth largest city.

Forty percent of those who could work are unemployed and the average worker earns approximately $80 a week. Therefore, the poverty of the masses is obvious and the physical, material, emotional and spiritual needs of the people are immediate.

In huge sections of the city there is filth and squalor. The polluted Tijuana River emits a stench for miles. Many homes are little more than makeshift dwellings with dirt floors and no running water or electricity. Many of the streets are ill-kept dirt roads with potholes big enough to bury a Volkswagen.

Tijuana is a city filled with beautiful bright-eyed children, aspiring teenagers and adults who long for a better life. In the poor neighborhoods there are people who no longer remember how long they have lived in such suffocating misery. Many of them age while going from one bit of hope to the next.

It is little wonder that thousands of Mexicans risk their very existence to “coyotes” to whom they pay exorbitant fees for smuggling them across the border. These smugglers often cram dozens of people into secret panels in trucks or trunks of cars where they often suffocate or suffer injuries.

The conditions of Tijuanans offer the perfect challenge for the partnership between California and Georgia Baptists.

Dwight Simpson, director of missions for San Diego Southern Baptist Association, has invested much of his life in helping the people of Tijuana. He also partners with a team of pastors and church planters who are dedicated to pointing residents to Jesus.

“Through the years evangelistic churches and ministries came to Mexico to win the lost,” Simpson related, “but they came as gunslingers prepared to carve notches in their belts for each one who prayed to receive Christ.

“They would put on puppet shows, have face paintings, dramas and vocal bands, and then they would have someone preach a sermon. During the invitation they would ask people to pray for salvation and raise their hands to indicate they had prayed ‘the sinner’s prayer’ – but there was no follow-up,” Simpson said, “and no apparent continuing interest in the ongoing needs of the people.

“Indeed, there are spiritual needs in Tijuana but there are also humanitarian needs.

“A man by the name of Fernando Martinez heard God’s calling and left his teaching profession to start Centro Shalom, a ministry for children and broken families,” Simpson said. “During the past 20 years this ministry has impacted thousands by providing for both the physical needs – food, clothing, clean water – and spiritual needs.”

Martinez also has mentored young men in order to prepare them for the gospel ministry. Salvador Suazo met Martinez when he was 11, and grew up under the ministry of the pastor and church planter. Suazo began to serve under Martinez’ leadership at Alamar Baptist Church, and today is the pastor.

Centro Shalom and Alamar share the same campus. On Sundays the church provides spiritual instruction and worship opportunities for 250 children, 70-80 teenagers and more then 200 adults; and during the week Centro Shalom feeds the hungry, clothes the needy, provides medical and dental services and distributes as many as 250 bags of food to neighboring families.

Georgia Baptist churches have invested both finances and volunteer mission teams in Tijuana. Those churches have provided food, clothing, vans and buses, medical supplies, and work teams that have built houses and ministered in a multitude of ways.

In one year the volunteers built 17 houses. The cost for materials for building a modest 20-by-20-foot home is $3,600. An additional $650 will provide the materials necessary for plumbing and electricity. On many occasions Georgia Baptists have provided the financial support and work teams for the construction of the homes, which can typically be built in one week or less.

Mount Olive Baptist Church in Moultrie has sent multiple teams to Tijuana for various mission projects. During the Christmas season the congregation delivers hundreds of shoeboxes filled with needed supplies.

Megan Stalvey started going with the Mount Olive team five years ago and on the first visit got to know Suazo, the Alamar pastor. On the second visit, the Tijuana pastor and the Southern belle from Moultrie spent some time getting to know each other. On the third visit the relationship deepened. On the fourth visit, Suazo proposed marriage and they were married on Jan. 1, 2011.

Salvador and Megan live in Tijuana, but she drives north across the border every day to teach school in San Diego. The couple is devoted to each other and to the ministry of the Alamar church.

Juvenal Gonzalez was born in a village in Guerrero. At age 17 he migrated to Clinton, NC, where he began working in the tobacco fields. One day he began vomiting blood and was taken to the hospital where, he said, “I was informed that I had tuberculosis and had only eight months to live. My lungs were partially destroyed.

“I looked to the ceiling and said, ‘Lord, if You are real I will serve You and give You the rest of my life.’ I wasn’t expecting mercy. I was just letting God know that for the next eight months I would serve Him.

“One day the doctors came and took me to the x-ray room, and they took me in and out that day about two or three times. Then they told me that I no longer had any sign of tuberculosis. I don’t know what happened, but God did something in my body. I was healed.

“When I got out of the hospital I went to church, made a profession of faith and got baptized,” Martinez said. “I started going to seminary one day a week, but I wanted more. I left North Carolina and went to the Hispanic Baptist Theological Seminary (now University of the Americas) in San Antonio, Texas.

“While I was in the seminary I met Maria de Jesus Perez Rodriguez, who won my heart. I found in Maria a woman who loved God and wanted to serve Him with all her heart.”

The two were married, and in February 2004 she attended a WMU conference where she met Kristi Carr, who talked about the need for a missionary in Tijuana. Carr asked Maria if she and Juvenal would consider serving the Lord there and asked permission to share their names with Dwight Simpson.

When Maria got back home she asked Juvenal, “Have you ever thought about going to Tijuana to start a church?”

“Would you be willing to pray about it?” she inquired.

However, in 2005 the Gonzalez family participated in FamilyFest (a WMU-sponsored mission experience for families) in the San Diego and Tijuana area. Kristi Carr provided leadership for the event and during that time God began to warm Juvenal’s heart toward heeding God’s call to ministering in Tijuana.

The Hispanic church planter admitted, “God began to change my heart. All the barriers were broken down. I had a great time with Dwight Simpson and we committed to follow God’s leadership.”

Over a period of several months the Gonzalez family began to sense God’s call to go to Tijuana to plant churches. Maria testified, “The call was very strong and our children confirmed that this was God’s plan.”

Gonzalez resigned his church in North Carolina, thinking Simpson was going to be able to raise the necessary funds to assist in their move and ministry: but in November 2005 he received a call from the association indicating sufficient funds had not been raised.

Gonzalez responded, “God has called us and God will provide.” Juvenal, Maria and their children, Sarai, Neftali and Ishmael, moved to Tijuana and God began to provide for their needs immediately.

Today Gonzalez serves as a church planter, pastor, mentor to other pastors, and is a major influencer for the cause of Christ in Tijuana. Maria, who is a registered nurse, teaches Vacation Bible Schools and a weekly Bible study for women, and does family counseling.

Sarai recently left Tijuana to enroll in Liberty University in Lynchburg, VA. Neftali and Ishmael interpret sermons, teach children and do whatever is necessary to meet the needs of the people in their father’s congregations.

Tijuana, with its 3.2 million people, has almost 600 Protestant churches but less than 4 percent of the population is identified with any evangelical church. In recent years Georgia Baptists have helped plant 40 churches in the area, but the needs are indescribable.

There are hundreds of thousands of people in Tijuana in need of housing and some of life’s bare necessities, and at least 3 million in need of an evangelical witness.

Harris is editor of the Georgia Christian Index.)