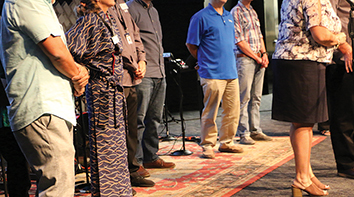 EL CAJON — The 2019 CA Women’s Gathering featured a host of missionaries from throughout the world who are on stateside assignment in California.

From Southeast Asia to Spain to Japan, the missionaries — most of whom cannot be named because of security issues in the countries in which they serve — shared stories about their diverse ministries with the group of 100 at Shadow Mountain Community Church in El Cajon. The Gathering was held prior to the California Southern Baptist Convention annual meeting Oct. 22-23.

One of the missionaries, who serves in Southeast Asia, admitted “the task is humongous — but God is doing amazing things.”

“It is messy!” she added. But the missionaries’ goal of starting “healthy church planting movements” is bearing fruit as first-generation believers are starting churches even amid “growing persecution.”

A missionary serving in Spain began her ministry with scrapbooking classes. She told the story of Yolanda, who came to the classes for years and eventually made a profession of faith in Christ.

The missionary said in any interaction she and her husband “always bring it down to our Christian faith, because we do have a wonderful story to tell!”

“I’m so happy to say,” she said, “that God blessed (her husband) with the opportunity to lead a homeless ministry in a park.”

Nearly 60 have been baptized as a result because “the power in the Word is so strong,” she said.

An offering of more than $1,400 was collected during the Gathering, which is designated for national Woman’s Missionary Union’s Blume conference for girls in middle- and high school.

She added that believers should always love people more than themselves.

“Love is always the focus of the gospel.

“We are for love, though the world often sees us as what we’re against,” Carr admitted. But “we are all about making disciples of Jesus who are on mission.”

“Stand your ground!” she encouraged the audience. “Don’t hold back. Work for the Master.”

Sandra Hughes and Carolyn Cummings led worship for the Gathering, which is sponsored annually by the CSBC evangelism and missions initiatives team. For more about women’s ministries visit www.csbc.com.