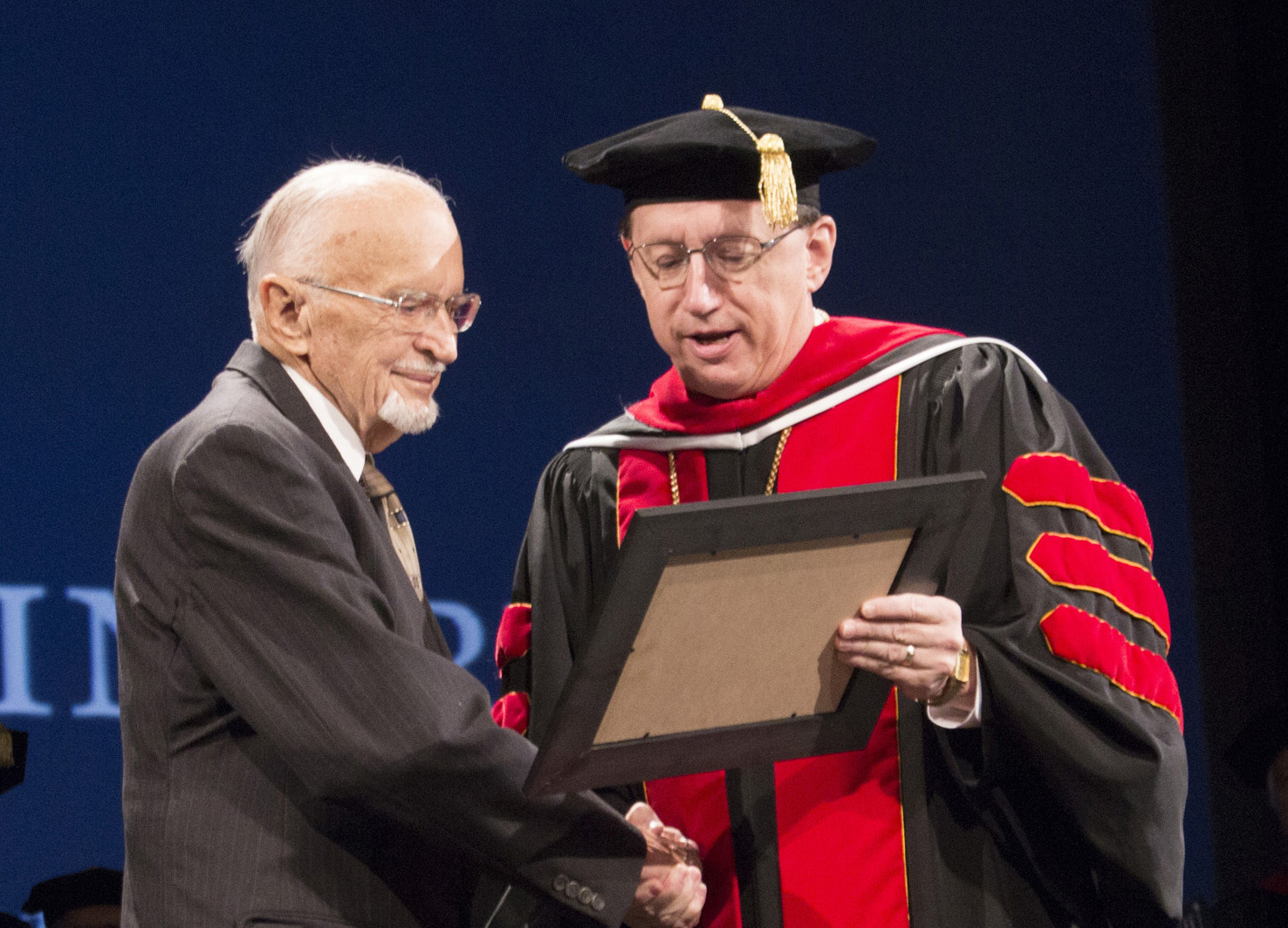 ONTARIO, Calif. (BP) — One of the unofficial mottos of Gateway Seminary — “the mission matters most” — is exemplified in the ministry of Wayne Eurich, who may be the oldest living graduate of the Southern Baptist seminary.

Eurich graduated in 1950 with a bachelor of theology degree as part of the second graduating class of then-Golden Gate Baptist Theological Seminary. As a student, he pastored Baptist churches in Fairfield and Novato, Calif.

“I felt my ministry was to be in the West,” said Eurich, who was honored as a distinguished alumnus during Gateway’s commencement in May.

As a young man, Eurich had followed his father from Nebraska to Washington state for work. Though he intended to live as a farmer, his calling to ministry reshaped his life, in both his professional career and his retirement.

Eurich and his brother were called to the ministry on the same day at Trinity Baptist Church in Vancouver, Wash. The pastor called on Eurich’s father to pray at the end of the service, but “through tears he said, ‘I can’t. I can’t speak.’ and he just cried. What a remembrance that is to carry with you,” Eurich said.

After graduating, Eurich led two churches in Oregon followed by churches in Los Angeles and San Diego. He also served as director of missions for the San Diego Southern Baptist Association for 15 years before retiring and redirecting his ministry beyond the West Coast.

Eurich’s next pastorate was at Kitzingen-Wurzburg Baptist Church in Germany followed by a time of denominational leadership in Oahu, Hawaii.

Then he ventured “back to Germany to Berlin Baptist Church, then to Maui, and then back to Kitzingen for the second time in Germany,” Eurich said. “My last interim outside of the lower 48 [states] was Juneau, Alaska. In 18 years, that was quite a few places!”

He also served in brief roles with International Mission Board (then the Foreign Mission Board), leading revivals in Europe and teaching stewardship in South Africa, and took a number of interim roles in Southern California.

He recalls riding home one Sunday with his father after listening to their pastor preach about tithing. He still remembers his “dad’s old sunburned face, the old tears rolling down,” and his father saying, “Now I know how I can be fair with God; if I make a dime, God has a penny coming.”

“That was my conversion experience on giving,” Eurich said.

Though spending most of his life serving in various ministry roles, he considers his service in retirement as most striking.

“Eighteen years of interim [ministry] was probably the most interesting,” Eurich said. “When I went to Germany, the veterans of WWII from [the] German side really enjoyed visiting with me and I with them.”

Eurich and his wife Jonita currently attend First Baptist Church of Pacific Beach, Calif., though this phase of ministry is relatively recent.

“Two years ago when I was 95, the Alaska Convention executive secretary called and wanted to know if I would be interested in another interim. I said, ‘Do you realize how old I am?'” he said with a chuckle. “That was about my last hurrah!”