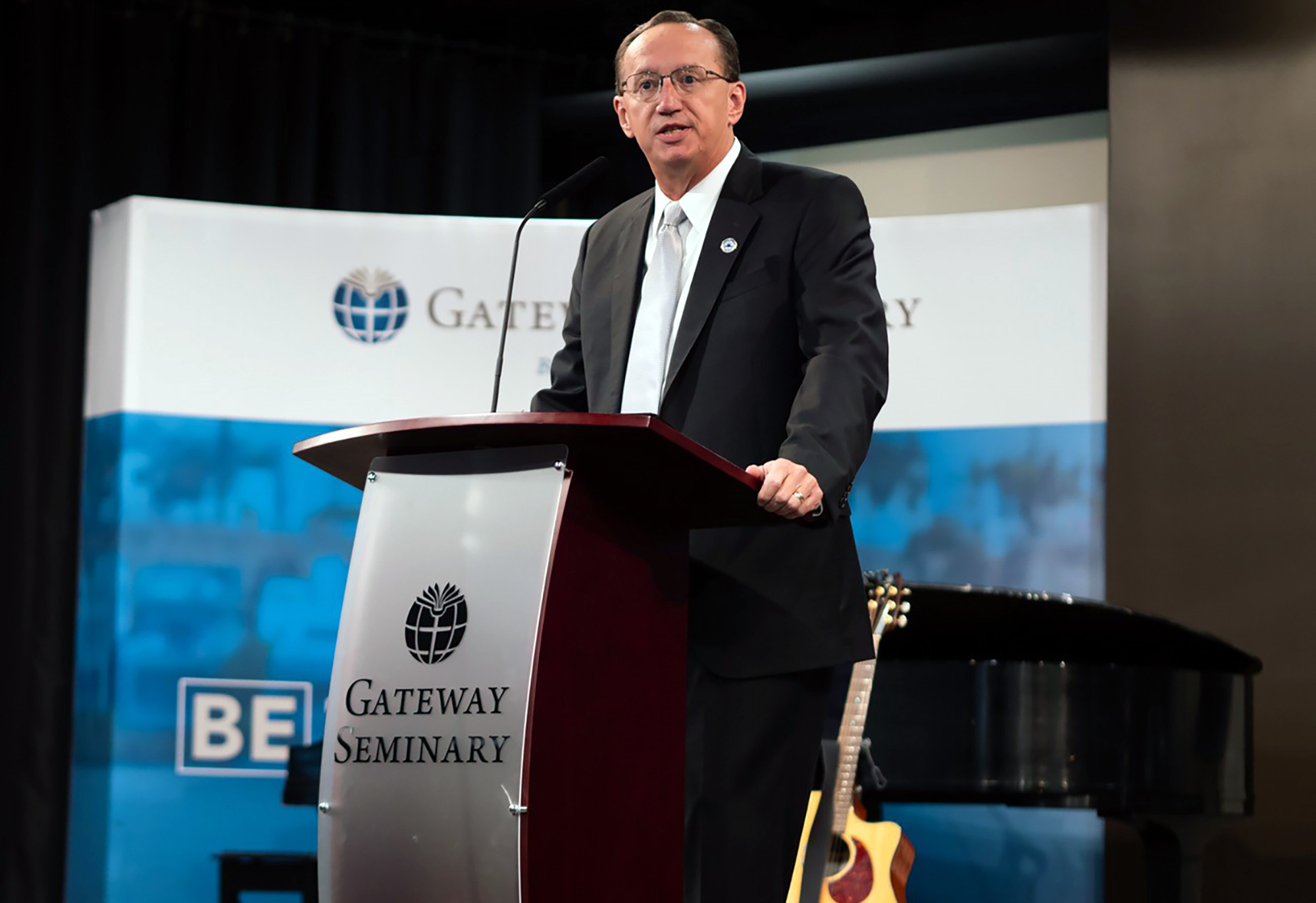 “The factors undermining personal evangelism,” Iorg noted, “have often resulted from a positive theological conviction, ministerial practice or leadership perspective taken to an extreme or applied in an unbalanced way.”

He said that in many ways the Southern Baptist Convention is stronger than ever before, with 3,600 international missionaries despite a forced reduction several years ago, increased enrollment across the six-seminary system, planting about 1,000 new churches annually across the US, as well as operating various ministries such as one of the nation’s largest disaster relief networks.

Yet, Iorg said the diminished role of evangelism threatens the Convention’s existence.

“Southern Baptists have a declining effectiveness in sharing the gospel with non-Christians and leading them to profess faith in Jesus,” he said. “Since baptism is the first act of public obedience for a new believer, baptismal rates are one important measure of evangelistic effectiveness. By that key indicator, our effectiveness in leading people to faith in Jesus is in steep decline.”

Iorg pointed to statistics that indicate the SBC baptismal rate is lower than at any time since the 1940s in spite of having more than twice as many churches in the Convention.

“In 2017 just over 30 percent of SBC churches did not record a single baptism. In that same year, 50 percent of SBC churches baptized two people or fewer. And 82 percent of churches had fewer than 10 baptisms in 2017 — less than one per month,” he said. “Baptismal data indicates we have a declining effectiveness in sharing the gospel with non-Christians and leading them to publicly profess faith in Jesus.”

Iorg cited the book “The Shape of Faith to Come,” which includes survey results about the religious practices of 2,500 active evangelical church members, including Southern Baptists. Related to personal evangelism, 57 percent reported they had not attempted to share the Gospel in the previous six months. Another 14 percent reported one attempt in six months.

“That means more than 70 percent shared the gospel one or fewer times in the previous six months,” he said. “One reason we are baptizing fewer people is we are not sharing the gospel very often in the first place.”

Iorg said he was not implying that evangelism is the only thing the church should be doing, but it should be the priority.

“A church must do many more things than evangelism,” he said. “A church must maintain a robust worship ministry, sound teaching ministry and provide interpersonal and practical ministry to both its members and its community. … But it is my contention it [evangelism] is the priority ministry. That does not mean it is the only thing a church — or any individual believer — must do. But it does mean it is the first thing, the most important thing, the priority thing that must be done.”

“But we are failing in our priority assignment,” he said. “We are not sharing the gospel effectively and leading people to profess faith in Jesus.”

Iorg said the Apostle Paul taught the priority of evangelism when he told the Corinthians in I Corinthians 15:1 & 3 that his own focus was on sharing the gospel, also underscoring it in II Corinthians 5:20: “We plead in Christ’s behalf, be reconciled to God.”

Besides the biblical directives, Iorg said there is a practical reason why communicating the gospel is important.

“Churches die if they do not reproduce,” he said. “Just like parents without progeny, churches that do not reach new converts die. Every church is just one generation from extinction. Unfortunately, this is a present reality, not a sociological scare tactic. California, for example, is littered with the dying remnants of Southern Baptist churches that were vibrant in the 1960s through the 1980s. They are closing as the previous generation enters heaven and no new believers take their place.”

Iorg said there is no single reason for the decline in personal evangelism among Southern Baptists, pointing to 10 factors contributing to the problem, including defining discipleship as “turning weaker Christians into stronger Christians” instead of “turning non-Christians into growing Christians.”

“Suppose you become the pastor of a 100-member church,” he said. “You train every one of them to be a ‘super-Christian.’ What happens in 50 years? All your members go to Heaven and your church closes. That’s the result of defining ‘making disciples’ as ‘turning weaker Christians into stronger Christians.'”

Another factor is reducing the outreach responsibilities of church members by telling them to “invite your friend to a church service” or “bring your friend to a ministry event.” Iorg said the subtle message from leaders is “you get them here; we’ll take it from there.”

But the “come and hear” approach to reaching people is inadequate, he said. “News flash: most Christian events are not that attractive to unbelievers.”

“You might say, ‘But you just don’t know our church. We have a fabulous worship service that everyone wants to attend.’ Really? Drive around on Sunday morning and see the thousands of people on soccer fields, at the malls, going to the mountains or beaches, or gathering to watch the NFL with their friends. Most non-Christians are not attracted to anything we are doing.

Iorg reminded the audience the most effective gospel-sharing strategy has always been believers telling their friends, family members, work associates and neighbors about Jesus.

“We short-circuit God’s plan, overestimate our leader’s capacities and rob rank-and-file believers of the joy of sharing the gospel when we limit our evangelism strategy to attraction models,” he said.

Two denominational trends also have lessened Southern Baptists’ focus on personal evangelism, Iorg said. The first is prioritizing theological debate over evangelistic effectiveness. Second, significant energy is now devoted at the SBC annual meeting to political issues and social policy, rather than focusing on reaching more people with the gospel.

Iorg also noted a preoccupation with social justice issues. “When I call personal evangelism ‘the vital issue,’ some disagree and substitute a pressing social justice concern instead,” he said. “Social justice is the rallying cry for many believers who are frustrated with the human condition.

“As Christians, we promote justice and want everyone to be treated respectfully,” he continued. “We want our world to be a better place because of our influence. But suppose we are completely successful at implementing a perfectly just social order — solving every one of these problems so every person in the world is treated fairly and enjoys a high quality of life. What would be the result? Very happy people will eventually die and be devastated when they discover their eternal destiny.”

Iorg closed his message with a challenge for each person to examine his or her own plan for personal evangelism.

“Lives hang in the balance,” he said. “Certainly, the lives of churches and our denomination are at stake. But, more importantly, much more importantly: The lives of people — broken, hurting, frustrated, sometimes evil, always lost — are in the balance. May God give us the grace to share the gospel with new intentionality, fervor and effectiveness.”

Video of the Gateway Seminary convocation service and the manuscript can be viewed at gs.edu/evangelism.