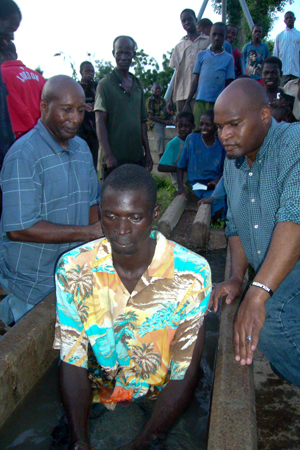 From La Puente to West Africa

RICHMOND, VA (IMB) – Water flows in a bucket brigade from a nearby well to a crude, concrete trough usually reserved for village livestock. This time the trough is a makeshift baptistry. The more than 100 Bambara circling it buzz with anticipation, clapping and singing praises to God, their faces lit by the amber glow of the West African sunset.

Anthony Dockery kneels beside the trough as he plunges a new Bambara Christian beneath the shallow water. Before the new believer can exit, another steps in, so excited about his decision to “walk the Jesus path” that he literally cannot wait to be baptized. Others follow suit, and by nightfall 14 new Bambara believers are soaking wet and smiling ear to ear.

The baptisms are the first for this predominantly Muslim village and for St. Stephen Missionary Baptist Church, where Dockery is senior pastor. Based in La Puente, St. Stephen is an African-American congregation that is partnering with the International Mission Board to make Christ’s name known among West Africa’s Bambara people. The church has “adopted” a specific Bambara village, making a commitment to spread the gospel there. The baptisms occurred in October 2010 during St. Stephen’s first mission trip to “K-town,” the nickname the church has given its adopted village.

Spread across four West African countries, the Bambara number more than 4 million. Most practice folk Islam, which blends Muslim beliefs with African traditional religion – witchcraft, ancestor worship and spirit worship. There are very few believers among them, and most know nothing about Jesus – including the several hundred residents of K-town.

During a conversation with one of the village’s chiefs, Dockery was shocked to discover that only one person, an IMB missionary on a survey trip to identify unreached people groups, had ever shared the gospel with the Bambara.

“He said his role as chief passes down through the family . so it goes back literally thousands of years,” Dockery noted. “He said, ‘I can tell you that through all of my fathers . there’s never been anyone that has come to our village and taught us about the Jesus path.’ And he said the people there have been waiting and asking God, ‘When is it going to happen?'”
Inspiration and recession

St. Stephen’s K-town adoption was inspired by Beulah Baptist Church, a much smaller congregation in Hopkins, SC that made a similar commitment in 2007. With an average Sunday morning worship attendance of 150, Pastor Brad Bessent led Beulah to adopt a Bambara village, and the church began sending short-term mission teams. Beulah has since made more than 20 trips to West Africa, starting a church in their adopted village that has catalyzed Bambara-driven church starts in neighboring villages.

Though St. Stephen is much larger than Beulah (about 1,600 average Sunday morning worship attendance), the church’s size doesn’t mean its adoption of a village comes without sacrifice. The five-year commitment involves sending four, seven-person teams to K-town annually. At a rough cost of $3,000 per person, that’s $84,000 per year – $420,000 over five years.

“We can’t wait for (conditions to be perfect). We’ve got a responsibility and it’s not just to West Africa. That’s why we made a five-year commitment – we’ll do what we need to do there and then ask the Lord where else He wants us to go,” Dockery declared.

Remarkable progress
That kind of passion has driven some of the progress St. Stephen is experiencing in K-town. The church’s most recent team, which returned in February, reported four new Bambara Christians. Combined with the church’s previous trip, there is a total of 25 believers, 17 of whom have been baptized – all in less than six months.

“We’re amazed at how well they’ve responded to Pastor Dockery and the teams,” said Jessica Thomas,* a Southern Baptist missionary who serves as St. Stephen’s IMB liaison, providing the church with support, logistics and training.

“The Bambara are not usually that quick to jump into baptism because that’s a big symbol for them. It really says, ‘I’m no longer following the other path,’ (Islam) and it usually causes persecution,” she said. “The fact that they were willing to fully commit so quickly was a big surprise. It was definitely the Holy Spirit at work, and I think St. Stephen is the perfect team for that village.”

Dockery added that the team’s skin color didn’t hurt, either.

“Being African-Americans, there was really a significant point made when the Bambara people first saw us and they looked at our skin tone and said, ‘Your skin is like mine,'” he recalled. “And a sincere connection was made. … It doesn’t matter what part of Africa you are from; you are African and you are part of this family.”

But that ethnic advantage only runs skin-deep, said Keith Jefferson, the IMB’s new African-American mobilization strategist. Jefferson, who is African-American, spent 16 years in the Brazilian Amazon sharing Jesus with the Quilombola, descendants of runaway African slaves. Though skin color might lend missionaries initial credibility, he said it’s ultimately the heart that matters, which is why St. Stephen has been so successful.

“International missions is not a white thing or a black thing. It’s a born-again thing,” Jefferson declared. “When people see the international language of love they are receptive. It doesn’t matter what color your skin is.”

As a mobilizer, Jefferson’s job is to spur African-American churches to greater participation in the Great Commission, particularly abroad. Without the deep international commitment of more African-American congregations like St. Stephen, Jefferson said reaching the world for Christ simply isn’t possible.

Gospel taking hold
Dockery is excited about St. Stephen’s mission in K-town because the church already is seeing signs – however small – that the gospel is taking hold there.

After the St. Stephen team said goodbye at the end of their October trip, Dockery went back into the village. K-town’s chief had given the church permission to construct a traditional home on the village’s land to house future short-term teams, and Dockery needed to show a local contractor the location.

“As we’re pulling up to the village, I see this gentleman under a big tree and . he’s reading one of the Bibles that we gave him,” Dockery said. “It just shows me that it’s real. It’s telling me that this culture is going to be moved by Christ.”

Dockery said St. Stephen teams have been cautious about giving away anything except the gospel. He wants the Bambara to understand there’s nothing tangible to gain from believing.

“They don’t know it but we obviously want to help them with irrigation, shelter, clothing and food, but we are really tempering that,” Dockery explained. “We want them to see we’re here for the Good News.”

The message appears to be getting through. At a village Bible study during the church’s October trip, a team member attempted to use a soccer ball to entertain a group of children who were distracting the adults.

“One of the Africans puts up his hands and he’s like, ‘No, no, no,'” Dockery explained. “He said, ‘We don’t want the kids to have this ball because we want everybody in this village to know that these people are not here to bring us nice things – they are here to teach us about the Jesus path.’

“So he told us to put that ball back. And we did.”

Impact at home
The Bambara aren’t the only ones being impacted by St. Stephen’s commitment. Whatever success the church is witnessing in West Africa, Dockery said, echoes back home in California.

“It breeds energy into the church. We’ve had 16 people come back so far and you would be amazed at how this church is fired up about 16 people talking about what’s happening over there,” he said. “It’s the part of the discipling process that so many churches are missing. When we share our faith is when we really affirm to ourselves whether we believe what we believe.”

But Dockery doesn’t want to mislead a church considering a similar commitment. Despite the overwhelming enthusiasm, he said St. Stephen’s Bambara project still has naysayers who question traveling halfway around the world when there are plenty of needs to meet at home.

“Do we really need to go that far to lead people to Christ when there are lost people here?” Dockery said. “If we just look at Acts 1:8 – Judea, Samaria and the uttermost parts of the Earth – we’ve got to go everywhere. We need to do La Puente, we need to do California … but we also need to go to Africa and Asia and all over the planet if we are able.

“I love what Marilyn Blackaby, wife of Henry Blackaby, said about missions: ‘God has given us all a mandate to go.’ She said what we need to do is ask Him for permission to stay because none of us has the option. That’s the way we’ve got to look at things, especially when you’re face to face with a chief who can say that at least six generations back in his village have never heard the Good News. That’s humbling.”