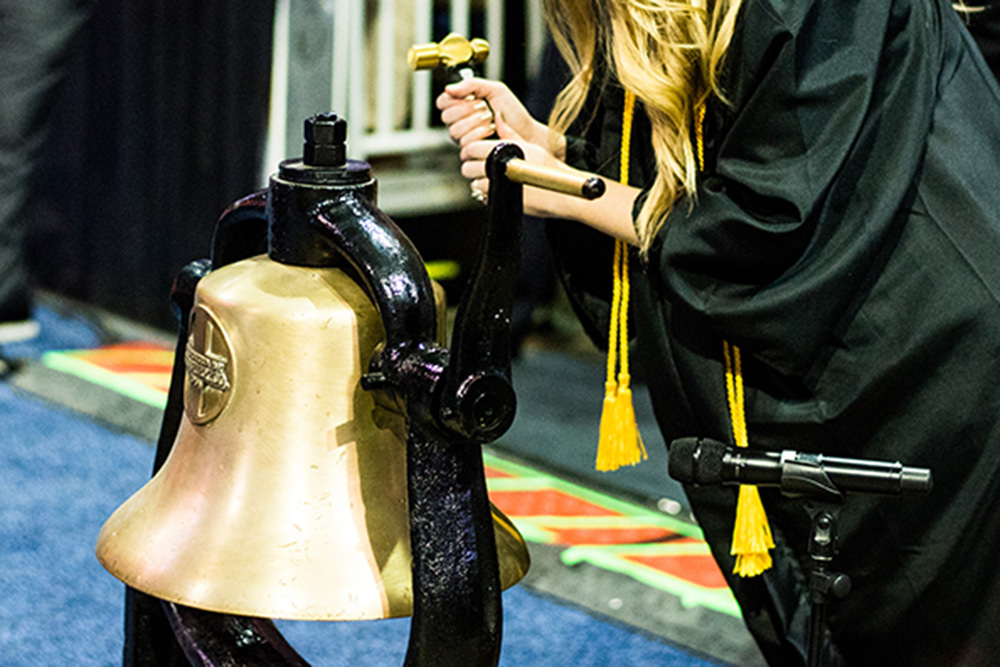 Riverside – More than 1,400 students at California Baptist University will be eligible to participate in four commencement ceremonies held in the Events Center from May 2-4. Of the thousands of students participating in the ceremonies, four academically high-ranking Lancers will be opening up each ceremony with a CBU tradition—the ringing of the bell.

Each toll of the bell represents one decade of the university’s existence. The bell will ring six times at each of the ceremonies to commemorate more than six decades of academic excellence. CBU was established in 1950.

Rodriguez, who has a 4.0 GPA, said she is grateful for the learning opportunities CBU provided.

“My biggest challenge was my first semester. I didn’t know what I wanted to do with my life,” Rodriguez said. “After four years I have a better idea of what I want for myself and my life.”

Rodriguez will move into a role as a representative and liaison for the Riverside County Board of Supervisors, Third District, after commencement.

Ruiz, who has a 4.0 GPA, will work for a wealth management company starting in the fall. She said the people at CBU left an impact on her.

“There have been various staff members who have been instrumental in my development as a leader, employee and follower of Christ,” Ruiz said. “At CBU, my learning didn’t end in the classroom, but rather was continued through interacting with staff and faculty who live out the gospel in their everyday lives, encouraging students to do the same.”

Edwards said it is an honor to ring the CBU bell and is also confirmation that her hard work was worth the effort. Edwards, who has a 4.0 GPA, will return to CBU in the fall to pursue a Master of Science in Speech Language Pathology.

“While I have always enjoyed helping others, the faculty in the communication disorders department truly represent and encourage the knowledge and compassion needed to serve others,” Edwards said. “My professors have helped remind me why I am in this field. Because of them, I am able to remain faithful in my intentions and desire to serve.”