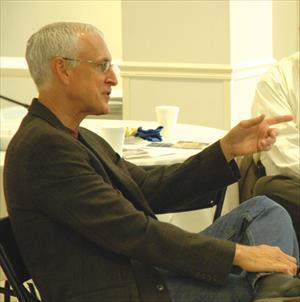 BIRMINGHAM – There are no living eyewitnesses. The physical evidence has long since disappeared, rotted or been stolen, and it’s been years since the events occurred.

Since Christ walked the Earth more than 2,000 years ago the physical evidence Christians have today to prove Christ was real, His resurrection occurred and He is the only way to Heaven are similar to the lack of evidence a detective may have in a cold-case.

At least that’s how J. Warner Wallace sees it. He spent 26 years as a cold-case homicide detective with the Los Angeles Police Department, and was an atheist before choosing to follow Christ at age 35.

In his book, “Cold-Case Christianity,” Wallace explores how Christians can take the same skills a cold-case detective uses while investigating a crime to first understand and then explain their faith.

In fact, that’s how he became a Christian.

His father was an atheist so Wallace followed in his father’s footsteps. Neither Wallace nor his father was opposed to Christianity; they just didn’t believe. Wallace’s wife, a cultural Catholic, wanted to raise their children in church so he agreed to go with his family to services but was not interested in God.

While attending a worship service at a nearby evangelical church Wallace took note when the pastor “sold Jesus as a smart, ancient, wise sage.”

“I was interested in any kind of wisdom of ancient times,” Wallace recalled. He began reading the Bible to find out more about this “wise sage.”

“As I read through the Bible I saw the red letters of Jesus and quickly realized that someone had written that,” Wallace said. “Someone thought those events were real things happening at some point. … They were eyewitnesses. … I had to learn to assess what I was reading and thought I would put the words to a test. If it didn’t pass the test then I could walk away.”

For six months Wallace was hesitant to accept the facts he was adding up in his head, but eventually found the words of the Bible to be reliable. He still struggled some with the reliability of the resurrection, however.

“This is the most unreliable aspect; the most outrageous aspect. … Your presupposition will lead your understanding of things. I had to really test my own presuppositions … and ask myself if I was keeping myself from believing (the resurrection) because it was a miraculous event.”

After testing the facts using the same skills he used in his profession, Wallace accepted Christ. He continued to attend church and grow in his faith. Later he earned a master’s degree in theological studies from Golden Gate Baptist Theological Seminary in Mill Valley.

Since retirement earlier this year, Wallace spends much of his time encouraging other Christians to examine their faith and to be able to explain Christianity to others as I Peter 3:15b urges: “Always be prepared to give an answer to everyone who asks you to give the reason for the hope that you have.”

In early September, Wallace spoke at several Alabama schools and churches, through Tactical Faith, a ministry based in Birmingham that seeks to “bridge the gap between apologetics/theology training and local churches.”

“We’re a great minority of believers in law enforcement,” Wallace told the officers. “But as Christians we have a great advantage … of experiencing things that most of the world doesn’t get to experience. And our Christian worldview allows us to see humans differently. With the level of evil we see … at some point you have to reconcile it in your head – you can still be a believer and still see all the terrible (things) that we see.”

Wallace encouraged the men to use their professional skills and the respect they receive as police officers to further the Kingdom of Christ and defend their faith.

“As police officers we have a high regard for evidence. We know how to put a case together,” Wallace said. “If you’re in this profession and a Christian, you can communicate how to build a case for faith.

“We should be leading the way as defenders of Christ because we’ve already been trained on how to use evidence. …You need to be making a case for Christ.”

(Reprinted with permission from The Alabama Baptist.)