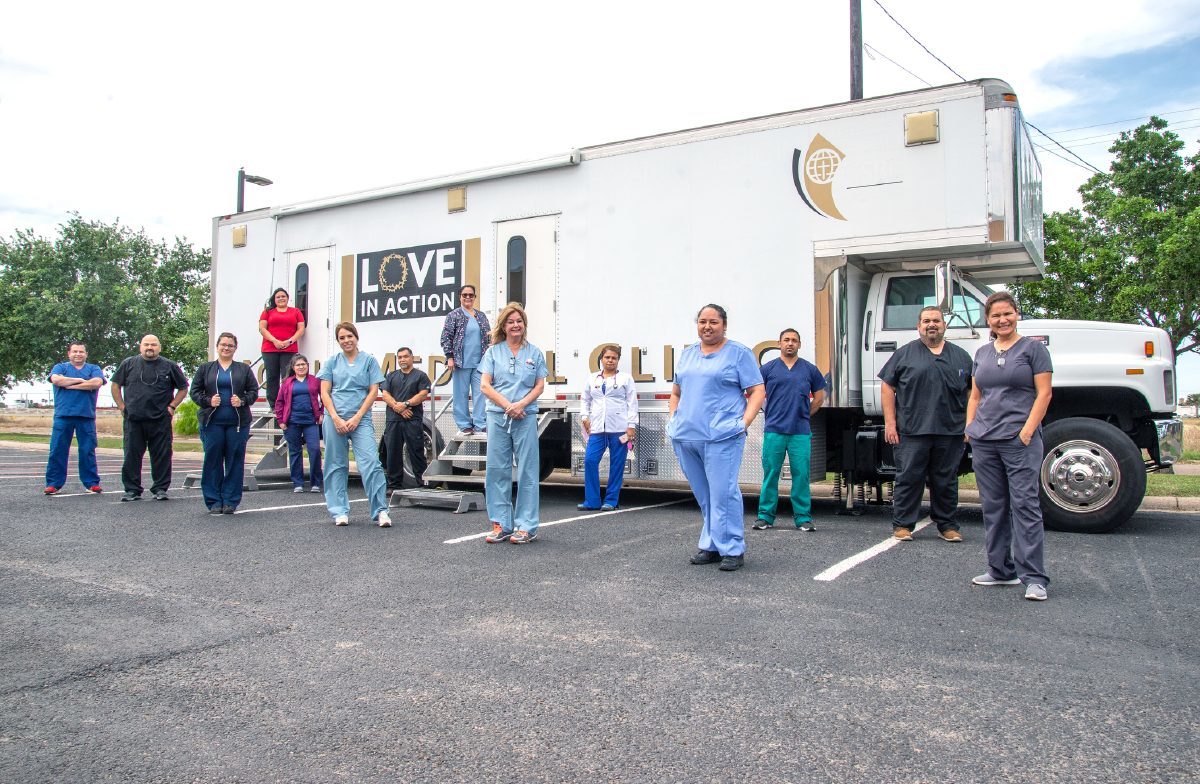 HARLINGEN, TX—A mobile medical clinic formally part of the ministry inventory of California Southern Baptist Convention is being used to fight the novel coronavirus along the Texas/Mexico border.

In January CSBC donated the mobile clinic to First Baptist Church of Brownsville, TX, which is serving its community by loaning the clinic to nearby Harlingen Medical Center in its fight of COVID-19.

The South Texas medical center is using the unit’s examination rooms to screen patients and staff for the coronavirus, the Harlingen Valley Morning Star reported on March 31.

For 18 years CSBC deployed the clinic to provide health care primarily to migrant farm workers in California. The mobile clinic was given to the Brownsville congregation in January when the CSBC unit could no longer be deployed because of increasing emissions standards by the State of California.

The California Air Resource Board enacted regulations restricting and mandating that the category of vehicles, including the mobile medical clinic, be off California highways by January 2020.

Mike Bivins, CSBC director of Disaster Relief ministries, said, “Considering the costs and effort to attempt to retrofit the diesel engine, it was decided to look outside our state for a new home where a Southern Baptist ministry would be honored and carry on in an environment that would be true to the ‘Love in Action’ lettering on the side of the unit.”

Bivins also noted the medical unit however was not being used as effectively as when first attained because basic health care needs are more readily available through local clinics and hospitals.

He added, “Insurance costs and liability issues have been on the rise for the last five years while the average number of patients decreased to less than a dozen a year. The decision was made two years ago to look for a new home, possibly a church or Southern Baptist entity that already had a medical ministry.”

He noted the CSBC mobile dental clinic is not the same class vehicle as the mobile medical clinic and can still be used effectively since dental care is less accessible than health care for migrant workers and the impoverished.

Several ministries nationally and internationally, especially where environmental and emissions standards are less restrictive than California, were considered.

With two weeks left in 2019, First Baptist Church of Brownsville was identified as a qualified recipient of the two-room medical unit. The church had an existing medical ministry across the border in Mexico which is “evangelistic and reaches many for Christ,” according to Bivins.

He said the church “not only had the staff, but also the resources to maintain the unit.”

Church leaders were in the process of determining how to use the medical unit when the coronavirus crisis struck.

“We were planning how best to serve the impoverished areas of the Rio Grande Valley and our church plants, planning to provide health screenings for blood pressure and diabetes, when the virus came and shut everything down,” Steve Dorman, First Baptist Brownsville pastor, told the Southern Baptist TEXAN, newsjournal of the Southern Baptists of Texas Convention, of which the church is a member.

First Baptist member Julie Bannert, director of surgical services for Harlingen Medical Center, facilitated the loan of the mobile unit to the hospital, which had set up tents outside its emergency room entrance to triage potential COVID-19 patients as temperatures soared into the 90s.

“The CEO of the medical center was thrilled to have an air-conditioned mobile medical unit,” Dorman said, adding that the unit’s exit and entrance doors make it possible to funnel patients through while minimizing the risk of the virus spreading.

“We hope it will help them, help people, that they will notice something about it being from the Lord and know that Christian people love and care about them,” Dorman said.

The unit came stocked with medical supplies and personal protective equipment, much of which has been donated to the hospital or other medical professionals for use in the crisis.

The medical unit is parked near the hospital’s emergency room entrance, where ER director David Salas and a team of nurses use its exam rooms to screen patients.

Dorman said the hospital may use the mobile unit as long as necessary in the battle against COVID-19.

Bivins said the Lord provided a “marvelous church to continue the ministry began by CSBC to minister to the impoverished.”

“It is amazing how God worked behind the scenes to orchestrate the transfer of the clinic from CSBC to a local church with a similar ministry. My prayer is that no matter how the mobile clinic is used, God will be glorified as the Brownsville church demonstrates ‘Love in Action.’”

(Jane Rodgers is a correspondent for the Southern Baptist TEXAN, newsjournal of The Southern Baptists of Texas Convention. The article was first published by the TEXAN. Terry Barone, CSBC Communications Team leader, also provided reporting for the article.)