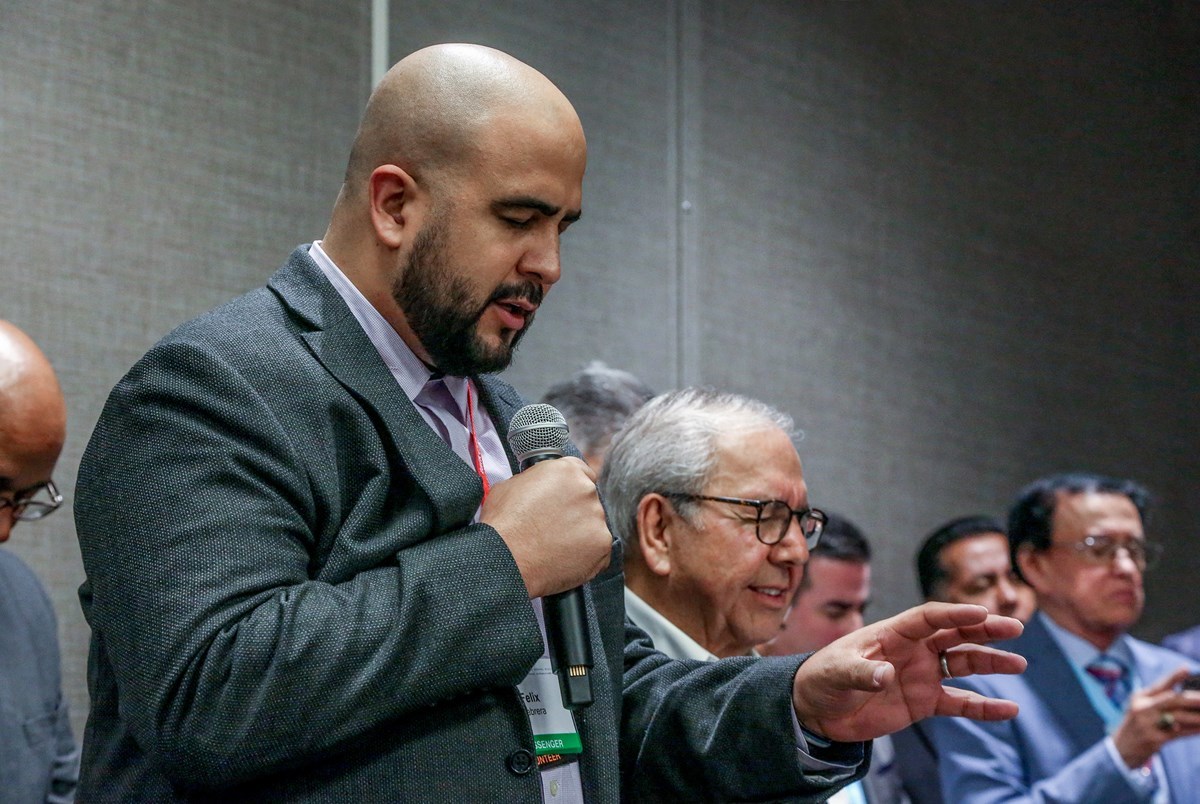 BIRMINGHAM, Ala. (BP) — More than 200 Hispanic pastors and leaders came together to celebrate their diversity and unity in Christ at the first national Southern Baptist Hispanic Leaders and Pastors’ Celebration on Monday night (June 10) in Birmingham, Ala.

Floyd encouraged the group reminding them that the ultimate commitment is to present the Gospel to every person in the world.

“We need people from all socio-economic classes, cultures, backgrounds, generations, languages,” Floyd said, “and I don’t know a group in the SBC that has more potential for growth over the next decades than the Latino family.” He also said he would be right alongside Hispanic churches to assist and support them.

Floyd added that the SBC culture “needs a little work. Culture is how we relate to one another, what matters to us, our team colors. Our colors come straight out of the words of Jesus: ‘Love one another … by this they will know that you are my disciples, that you love one another.'”

Members of the SBC’s Hispanic Leaders Council laid hands on Floyd while Felix Cabrera, second vice president of the SBC, led a prayer over him.

Bobby Sena, Hispanic relations consultant of the SBC’s Executive Committee, introduced all 25 members of the Hispanic Leaders Council saying, “let us pray for them, it is a blessing to have this group of brothers and sisters in these roles.” Cabrera, also a member of the council, prayed that Hispanics may be as one, leaving “behind any differences and uniting behind the Gospel.”

Ramon Osorio, ethnic relations director of the North American Mission Board, moderated a panel on preventing child sexual abuse in the church. Osorio asked panel members about actions that were considered child sexual abuse but not often talked about. He also asked how churches could create a culture of safety for children on campus, and general tips for Hispanic churches to prevent sexual abuse of children.

Clara Molina, author and speaker, advised churches to always run background checks on anyone and everyone working with children and not be desperate to accept someone because of a lack of workers.

Eloy Rodriguez, Hispanic pastor at Idlewild Baptist Church in Lutz, Fla., added that checking references for people who want to serve is key.

“Call their former pastors and ask about them and have them wait to get approved,” he said. “A wait period is good to sort out who might have bad intentions.” In general, the panelists advised churches to create open spaces where children could be seen at all times, to have safety policies in place that all staff members are trained on and to always report wrongdoing to law enforcement.

Pastor Walter Montalvo, who passed away this last year, was honored by Victor Pulido during the celebration. Montalvo came to the United States from Ecuador in the 1970s and planted several churches in the northeastern United States, including four among the Kichwa people — a native group originally from South America.

“This South American missionary of Hispanics and Kichwa left us a great legacy that we must seek to imitate,” Pulido said. “We will always remember him wearing his sombrero and walking with his shepherd’s rod.” Montalvo’s daughter Blanca and granddaughter Elizabeth received a water color painting in honor of him.

“Only eternity will reveal the number of lives that were blessed by the life and ministry of Dr. Daniel Sotelo,” Lagos said. Sotelo was led to Christ by his wife and became an ordained pastor in 1953. He pastored churches across California in key cities like El Monto, Pico Rivera, Los Angeles, San Francisco, San Jose and Fresno while serving in various Baptist organizations. “May his legacy and his ministry inspire us to serve the Lord diligently and until we are reunited with him in Heaven.”

Daniel Sanchez, co-chairman and of the Hispanic Advisory Council, shared some statistics about Hispanic population and its expected growth in the next decades.