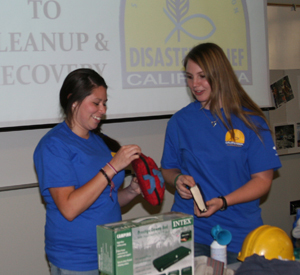 The April 16 event on the Riverside campus, sponsored by California Southern Baptist Convention Disaster Relief Ministries (CSBCDRM), grew out of a desire to engage young adults in the effort, according to Don Hargis, CSBC Disaster Relief coordinator.

“One of the areas that Southern Baptists excel in is disaster relief,” White observed. “Why not engage a younger demographic who can serve a lifetime and who can reach a younger audience?”

Hargis agreed, adding that bringing younger volunteers into the ministry has been “on my heart for a quite awhile.”

He said the possibility of training college students was discussed at the 2010 national “Disaster Relief Roundtable” where all state convention coordinators meet with other national DR leaders. According to Hargis, the group voted unanimously to begin looking to collegians.

Noting CBU offers its students multiple opportunities to take the gospel message to the ends of the Earth through International and Domestic Service Projects, White said she thought DR would be a good fit for the university.

She noted that since 1997, CBU has sent more than 2,400 students to 49 countries. Current statistics reveal 52 percent of the world’s population is less than 30 years of age and, with these statistics in mind, White said she asked herself, “How does college disaster relief fit into this box?” The 2010 Haiti earthquake served as the impetus to move forward and begin discussions with Hargis.

He said he, White, Melody Harper, student mobilization campus strategist for the International Mission Board, and Eydie Miskel, a CSBCDRM chaplain who also has led some of the university’s ISPs, began planning the spring training event.

However, training younger volunteers began even earlier as Hargis taught three Disaster Relief classes at the 2010 Tsunami Student Conference in Long Beach. He noted that each class was full.

Second only to the Red Cross as a private-sector disaster relief agency, Southern Baptists have provided domestic and international disaster assistance since 1966. More than 90,000 Southern Baptist volunteers are trained to respond to disasters wherever they strike.

Which can be anywhere. According to the Centre for Research on the Epidemiology of Disasters, approximately 4,000 disasters were recorded from 2000 to 2009 throughout the world, creating a continual need for volunteers.

Disaster relief teams typically are comprised of retirees and middle-age volunteers who have time and resources. An IMB survey of Disaster Relief directors conducted by Harper noted their primary concern with using college-age volunteers is availability and dependability, followed by overall commitment and motivation.

The study also surveyed students to gauge interest in Disaster Relief. “Sharing the gospel,” followed by “Helping people in their time of need,” were the number one and two reasons why college students want to serve in the ministry.

Hargis offered to teach CSBC’s first-ever collegiate training at CBU. Ultimately, though, he was deployed to Japan to assist with relief efforts following the devastating earthquake, tsunami and nuclear disaster, and was unable to attend the event.

Miskel and another CSBCDRM volunteer, Chuck Clayton, led the training. Clayton, the Convention’s lead cleanup specialist who has been deployed nationally and internationally, taught about the stages of a disaster, qualities of an effective volunteer, organizational and reporting structures, volunteer responsibilities, equipment use, deployment processes, health and safety protocol, and cleanup procedures for fires, floods and mudslides.

Miskel provided an overview of Disaster Relief chaplaincy, using photos from her work on DR teams in the US and Haiti. She explained the role of a chaplain during a disaster and stressed the importance of “listening” while providing “spiritual care” to victims in need of hope.

One CBU student’s enthusiasm didn’t end with the one-day event. Jordan Martinez also attended the California Volunteer Challenge in Fresno May 4-7, and plans to serve as a Disaster Relief chaplain. The Challenge drew about 150 volunteers from throughout the Golden State for training.

The desire to help others through disaster relief assistance is gaining momentum on the CBU campus. Other students have approached Miskel about being included in the next training event.

Hargis said he thought the 86 students who participated was “a very good start” and looks forward to training more.

“These students get an early education and experience into the one ministry that Southern Baptists do better than any other Christian group – disaster relief,” Hargis asserted. “College students are looking for opportunities and places to serve, and I don’t want to miss the chance to interact and give them what I believe is one of the best options around – to show Christ’s love and hope to disaster victims who, in their time of distress, don’t necessarily feel love or comprehend hope.”

Hargis added that with a more mature base of volunteers, training college students provides “a new generation to raise up and become the future leaders of Disaster Relief Ministries.”

After the training, Miskel commented on the students’ enthusiasm to follow Christ’s mandate that “we bear one another’s burdens.”

“I am excited for the opportunity the students have to live out their faith to a hurting world,” Miskel said. “In the process, I can’t help but believe that their lives will also be forever affected. I wish I would have been introduced to serving on a Disaster Relief team at their age.”