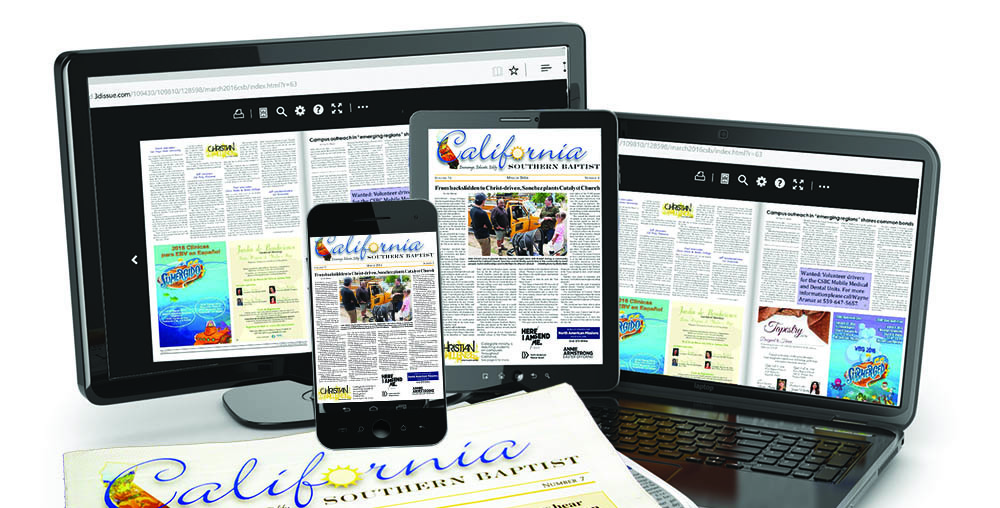 The CSB, like other state Baptist newspapers/publications, has experienced decreased circulation and rising costs which make it unprofitable. “This is not solely a financial decision, but also an attempt to communicate more effectively,” according to Terry Barone, editor of the CSB and leader of the CSBC communications team.

“We have known that when expenses exceeded income, we’d have to look at alternative avenues to communicate the California Baptist story. We crossed that threshold in 2017.” Barone said that while advertising dollars were “relatively stable,” circulation has declined to about 4,600 from an all-time high of nearly 29,500 in 1977.

“With discontinuing publication of the newspaper,” Barone said he believes “we have the opportunity to use many different types of emerging technologies to better tell the stories of how God is working among California Southern Baptists.”

He said CSBC is committed to providing news and information to its constituents. “Over the next weeks and months we will be working to develop a primary channel for providing that service.”

Barone noted California Southern Baptists already can access many of the news and feature articles published in the CSB on the CSBC website — www.csbc.com/news.

“That site has articles from the publication as well as news of interest to Southern Baptists from its agencies, institutions and the greater religious landscape. “For now, we will use the CSBC website as the platform to provide news and information,” Barone said.

He noted the most difficult decision in the process “is eliminating the managing editor’s position filled by Holly Smith. She currently is the longest-tenured employee of CSBC, having served more than 29 years.”

“Her experience, enthusiasm for the Lord’s work and ministry, and her unwavering commitment to telling the story of Southern Baptists, and California Southern Baptists in particular, will be missed.”

Smith’s service was scheduled for completion March 31. After Barone informed the CSBC staff on Feb. 26 of the decision to discontinue the paper, Bill Agee, CSBC executive director, addressed the group and said the decision “wasn’t made lightly.”

He said his mission in leading the 80-year old organization when elected in May 2017 was three-fold — “change the mindset, structure and systems of the organization to make it function more efficiently and serve its constituents more effectively.

“Discontinuing the paper,” he said, “is part of the ‘systems’ change that still need to take place in order to make CSBC a viable and vital organization to its churches and its mission of empowering the vision of churches to reach the lost in their communities.

“We’ve met the challenge of changing the mindset and have successfully changed the structure of the organization,” Agee added. “Now we must tackle possibly the most difficult aspect of change — systems.

“We know that people today do not access news and information the way they did 10 years ago, let alone the way they did in 1940 when CSBC was founded. We are attempting to provide a more flexible system of information that is accessible to all California Southern Baptists while being financially prudent.” Barone noted the CSB “is not the first state Baptist newspaper to be discontinued.

Those conventions and publications have created successful channels for providing news and features to their constituents. We certainly will be looking to and learning from them as we move forward.”