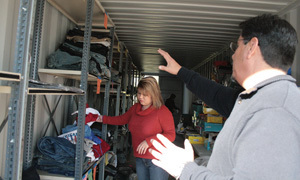 FRESNO – New clothing, shoes, backpacks and school supplies designated for migrant children were stolen from a storage facility at the California Southern Baptist Convention offices in Fresno sometime over the weekend of Jan. 12-13.

The materials, with a retail value of approximately $75,000, are used for the Convention’s Feeding Those Who Feed Us ministry each summer, to outfit some 2,000 elementary-age children of migrant workers.

Oscar Sanchez, CSBC migrant missionary, said many of the children of migrant families “may never have had a new outfit to start school.”

Sanchez added that clothing is only one aspect of the ministry, which is conducted at 25 migrant centers throughout California, the majority of which are located in the San Joaquin Valley, but stretch from Oxnard in the south to Yuba City in the north.

In addition to the clothing ministry, migrant families receive food staples and medical and dental services coupled with a variety of evangelistic activities such as Vacation Bible School.

Charles McClung, CSBC ministry evangelism specialist, said the migrant outreach “gives us an opportunity to love migrant workers and their children while sharing the Good News of Jesus Christ. We get to meet their physical needs, but also share Jesus. God has opened this door for more than 10 years and we want to continue to reach these families for Christ.”

Sanchez noted Feeding Those was “just about fully stocked” for the summer outreach.

“The storage facility was stacked almost to the ceiling with shoes, backpacks and clothing for both boys and girls,” he explained. “About 90 percent of all the supplies designated for the summer ministry were taken during the burglary.”

At this point, Sanchez is unsure if all the materials can be replaced by summer. “We will do our best to secure the funding to replace as many of the supplies as possible and serve as many migrant children with new clothes for the new school year,” he said.

“We already are on the hunt to buy new clothes,” McClung added. “The plan is to replace as much of the clothing, shoes and backpacks as possible for the summer ministry. We’ve got to be ready by the end of June for distribution.”

Feeding Those Who Feed Us is scheduled weekly July 8-Aug.19 this year.

California Southern Baptists have had ministries to migrants for more than 40 years; however, the effort has been invigorated with the addition of clothing, food and health care services in the past decade.

In 2012, more than 800 volunteers from 123 CSBC churches ministered to nearly 7,500 migrant workers and their families and reported 1,030 professions of faith. During the same period, 1,075 backpacks filled with school supplies were distributed and more than 1,950 children received new sets of clothing. More than 1,500 families received food staples such as beans, rice, flour and sugar.

Since all the clothing is new and CSBC works with several companies for key purchases in bulk, the Convention is gathering online monetary donations to help replace the stolen goods, at www.csbc.com under “Donate to Migrant Ministry.” Monetary gifts designated for “migrant ministry clothing” also will be received at CSBC, 678 E. Shaw Avenue, Fresno CA 93710