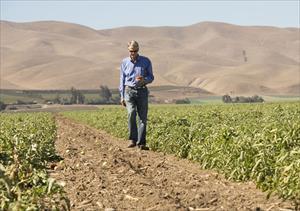 SALINAS (BP) – Francis Murphy understood something important: most people like tomatoes, in some form. They like them on hamburgers, in salads and with tacos. Whole, sliced or chunked, people want tomatoes, and Francis learned how to provide them year-round.

Working beside his father, Oscar, who started the family-owned tomato distribution business in Houston, Francis made his living in tomatoes – a lot of tomatoes. He helped build Murphy Tomatoes into a multi-million dollar company with operations in Texas, Florida and California.

A devout Southern Baptist, Francis gave generously throughout his life to the International Mission Board and global missions efforts. After his death in 2010, IMB received a gift from his estate finalized in 2013 at more than $5.3 million for the Lottie Moon Christmas Offering for International Missions, the largest estate gift in the organization’s history. The offering supports missionaries around the world and their ministries among people who have previously been without access to the gospel.

Anne Murphy, Francis’ widow, was not surprised by her husband’s generous plans for his estate. He would often tell Anne, “I wish I had more to give,” speaking not only of money, but of his time, energy and prayers.

“He just didn’t want for himself,” Anne said from her Salinas home. “God gave, and Francis gave. Francis didn’t want or need.”

Anne faithfully carried out her husband’s handwritten wishes. On a memo pad with “Show me Your ways, O Lord; Teach me Your paths” printed at the top, Francis made his priorities clear. He would make sure people heard the truth of Christ, even after his death.

Generous from the start

Anne didn’t know much about the tomato business when she first met Francis in Houston, but she did know one thing – Francis was a flirt. Anne smiles, thinking back on the distinguished gentleman who was a client of the produce distributor for which she worked. Anne said he would enter the office, larger than life, singing hymns and quoting scripture, and always offering a warm smile and friendly conversation.

One day Francis came into her office and offered to change a flat tire he noticed on her car. When she went out later that day, the struggling single mother found four brand-new tires. The only payment Mr. Murphy would accept was her company at dinner.

The next year, Anne became Mrs. Murphy and stepmother to three grown children. Francis became a loving husband for 41 years and a faithful father to Anne’s two daughters.

As Anne became part of the family’s growing tomato business, she moved with her husband between homes in Texas and Salinas, where more than 2,500 acres still yield the fruit.

When the Murphys were in California during part of the year they attended Valley Baptist Church in Salinas.

Anne observed the love Francis had for his workers and witnessed the life-long generosity the successful operation afforded him.

As a young Christian, Anne didn’t always understand the motivation behind her husband’s financial giving, but she trusted his wisdom. Francis lived life generously and obediently to the Lord. Even as his wealth accumulated, Anne said he looked for the good he could do with it. Part of his daily time with God included asking how he should invest and spend his money.

Anne learned to love Francis’ spirit, which was quick to respond to the needs around him. He regularly offered wise counsel or a good book he had finished reading to church members, family and employees. A member of Friendswood Baptist Church in Friendswood, TX, he was not only a faithful tither and supporter of global missions, but he did not hesitate to write a check to benefit everything from ministry to widows to disaster relief efforts along the Gulf Coast.

The man behind the money

Though her grief of losing Francis remains evident, Anne said she wants others to know about his love for people and his love for Jesus. She hopes his example of giving can bring glory to God. From the day he gave four new tires to his last moments of life on Earth, Anne knew Francis’ generous love.

“I wish I had the words to describe this man that God somehow brought before me,” Anne said. “He showed me how to live.”

Anne said he also showed her how to die. Lying beside Anne in their Houston home just 15 days after a cancer diagnosis, Francis took his last breath. He was 84.

“It was simple, really,” Anne said. “He just slipped into the arms of God.”

The promise of Heaven guided Francis to support IMB’s vision to reach the nations and also to actively support other ministries, such as Gideons International.

Anne said Francis’ love of missions was magnified when grandson Steve* was appointed as an IMB missionary.

“When (Steve) was appointed … you would have thought that Francis Murphy himself was going!” Anne said.

Steve said his grandfather’s presence at his 2009 missionary appointment service in Shreveport, LA was one of the most intimate times they ever shared. He felt Francis’ excitement and pride.

That night would be the last time Steve saw his grandfather.

“He really had a heart for truth, and that’s why the Word was so important to him,” said Steve, who serves with his family in the Balkan region. “The sharing of that truth around the world was an extension of that. He wanted to see the world embrace the truth of the gospel and to have the access to it that they needed.”

Though some family members were surprised by the size of Francis’ estate, his desire to give to causes he held dear was no surprise.

Francis’ son, Joe, the current owner of Murphy Tomatoes, said his father looked for ways to bless others when the business became successful, and he passed on that desire.

“He was very conscientious about the decisions he made in business, but it wasn’t only about the money,” Joe explained. “It was a passion that God gave him the ability to generate those revenues and to make those profits so that he could bless other people – and then to have a big contribution that he could make at the end of his life. I think that was really what he worked for.”

Joe also knew, as a teenager, that the money his father made would not be passed on to him and his siblings. Francis taught his children about the company and encouraged a strong work ethic in them, but he made it clear he had other plans for his profits.

“I saw what he was doing with his donations, and it rubbed off on me,” said Joe, who hopes to pass on those ideals to future Murphy generations. “What I hope for them is that they would have a heart for God and a heart for missions and heart for His people around them.”