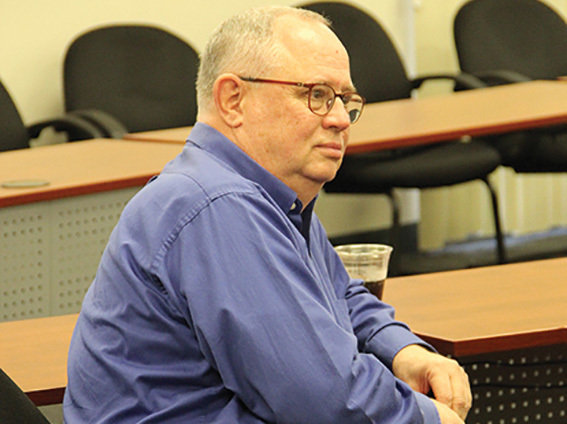 Executive Board says farewell to McCullough

Ramirez succeeds Mike McCullough who served in the position more than 21 years and retired Jan. 31.

Ramirez assumes the new task after serving a little over two years as leader of the CSBC evangelism and missions initiatives team. Prior to that he was pastor of Iglesia Bautista White Road in San Jose; he also has served churches in Pico Rivera and La Habra.

Having served two terms as a member of the Executive Board, Ramirez has a working knowledge of the body. He also served on the Focus 21 Task Force in 2013 and was an advisor to the executive director search team that recommended Bill Agee as CSBC executive director in May 2017.

Ramirez earned a bachelor of science in organizational leadership degree from Biola University in La Mirada and a master of theological studies from Gateway Seminary in Ontario. He currently is working on a doctor of ministry degree in executive leadership at Gateway.

In his almost 22 years of service as associate executive director, McCullough had responsibility in many areas including leading various mission divisions/groups and directing Cooperative Program promotion. He served as interim executive director from January to May 2017 after Fermín Whittaker retired and Bill Agee was elected to lead California Southern Baptists.

Most recently, with the development of the team approach inaugurated by Agee, McCullough supervised all CSBC team leaders and served as chief operating officer of the Convention. He has been the staff liaison to many Convention committees and was instrumental in working with and reorganizing the Executive Board.

Prior to his CSBC service, McCullough was associate executive director for the Nevada Baptist Convention where his duties included being director of Christian social ministries and editor of The Nevada Baptist newspaper.

The Board’s January session was the first after messengers at the CSBC annual meeting in October voted to reduce the size of the Board from 40 to 28 members. In anticipation of the move, the Board approved new bylaws governing its activities. As part of the newly adopted bylaws, standing committees were revised and three special purpose committees were created.

During its orientation meeting, the Board elected members to both standing and special purpose committees, and elected David Yi, senior pastor of New Vision Church in Milpitas, as the member-at-large representative on the executive committee.

The Board revisited a September action to no longer provide a GuideStone Financial Resources protection benefit package (survivor and disability benefit) for qualified pastors and church staff, which was to be effective Jan. 1. At the January meeting Board members voted to continue providing the benefit package for those enrolled through March 31, and to only provide the benefit for the lead/senior pastor beginning April 1.

The strategic ministries committee submitted an amendment to Executive Board bylaws related to its duties to allow for ministry changes, with the creation of an office of disaster relief and camping ministries. The new office will be led by Mike Bivins, current CSBC disaster relief and volunteer mobilization coordinator. He has an extensive background in camping ministries and will supervise operations at Jenness Park Christian Camp, CSBC’s campground in the Sierra Nevada Mountains.

Executive Board bylaws amendments must be submitted for consideration at one meeting of the Board before action can be taken at the following meeting. The proposed amendment will be considered in May.

In other business Board members:

— approved corporate officers for 2020 and authorized them to transact business for the Convention;

The next meeting of the Board is scheduled for May 14-15 in Fresno.