Executive Board May 2018 – California Southern Baptist Convention
Skip to content 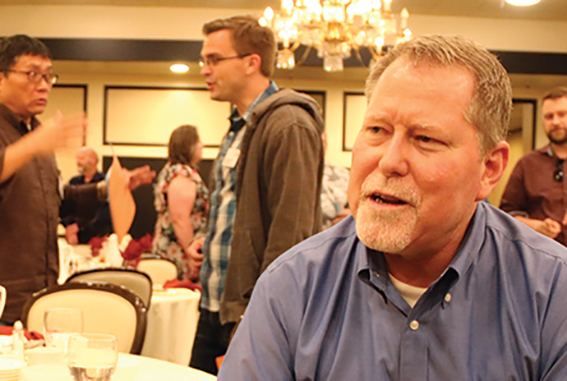 FRESNO — Election of a leader for the small church initiatives team and adoption of a policy to identify “inactive” churches highlighted the spring meeting of the California Southern Baptist Convention Executive Board.

Ken Sartain, pastor of First Baptist Church in Hughson, was elected leader of the small church team effective June 1. It is one of four teams created last fall by the Executive Board to fulfill goals set by new CSBC Executive Director Bill Agee, who was elected in May 2017.

In addition to serving as pastor of the Hughson congregation, Sartain since 1995 has been president and chief executive officer of Connecting With Purpose, a support partner to churches focusing on revitalization through church health and leadership.

A US Navy veteran, Sartain directed a special operations laboratory for a major Department of Defense contractor, was senior technology director for a line of businesses dealing with complex technology applications and executive director for a corporate labor management organization providing professional services to Fortune 250 companies.

He and his wife, Susan, have three adult sons.

The newly adopted Executive Board policy defines an inactive church as one that has not contributed financially to either the Cooperative Program or California Mission Offering or has not submitted an Annual Church Profile in at least three years.

The policy calls for continued communication with inactive congregations, but outlines that minimal resources be expended to serve those churches unless they reengage.

Presenting an amendment for the Exec-

utive Board bylaws, the executive committee proposed assigning the duty of Board development to the board operations committee. The amendment was introduced at this meeting and will be considered at the September meeting.

It calls for the committee to work with the Executive Board chairman and the CSBC executive director in determining skills and expertise needed for Board members, and to discover likely individuals to recommend for service.

During his Friday report Agee thanked Board members for praying for his recent open-heart surgery. He noted it was “preventative” and that he was back on the job 20 days after the procedure.

The May meeting was Agee’s first anniversary of being elected executive director, and he recounted major accomplishments during his first year including meeting with national partners, state ethnic fellowships and association directors of missions. He also talked about his recommendation of a new Convention structure and filling team leader positions to put that structure in motion.

One of those leaders, Pete Ramirez of the evangelism and missions initiatives team, reported to Board members that more than 100 grants have been given to CSBC congregations so far in 2018 to help with evangelism efforts and outreach.

He noted the grants have “been well worth the effort” because he receives reports of salvation decisions from almost every congregation that has received a grant. Ramirez noted a sports camp that yielded 20 professions of faith, while one church reported seven decisions for Christ during an Easter service and several more afterward during an Easter egg hunt.

Ramirez noted CSBC teams are available to help “resource the vision of churches.”

In other business the Board:

The next Executive Board meeting is scheduled for Sept. 12-13 in Fresno.