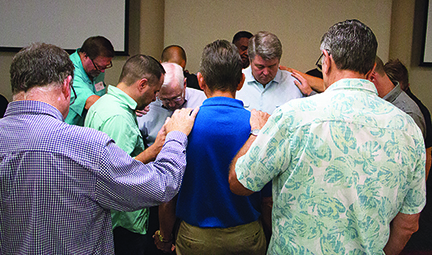 FRESNO — A new structure for California Southern Baptist Convention staff and adoption of a $14.9 million proposed budget for 2018 were approved by the CSBC Executive Board during their Sept. 7-8 meeting in Fresno.

In his inaugural Board meeting as CSBC executive director, Bill Agee presented his vision statement for the Convention while also outlining a staff restructure for its service to churches into four ministry “initiative teams.”

The Board approved both.

Agee’s vision statement is: “CSBC will focus on resourcing the vision of local churches while differentiating itself in the areas of church revitalization and church planting.”

The proposed budget of $14,890,468 includes a Cooperative Program objective of $6.7 million. In presenting the budget, Jenice Moore, chairman of the Board’s finance committee, said the objective is “based on actual year-to-date 2017 CP receipts and projections for 2018.”

From CP giving, the Southern Baptist Convention Executive Committee will receive 35 percent for worldwide missions, an increase of .5 percent, continuing progress in achieving a goal of allocating 35 percent of Cooperative Program gifts to the SBC.

The budget includes $1.8 million from the North American Mission Board to fund designated CSBC ministries in 2018. The $1.8 million includes $250,000 for church planting.

Board members also approved a Constitution amendment to reduce the membership of the Executive Board from 40 to 28. The motion must be approved by messengers to and will be introduced at the CSBC annual meeting, Oct. 24-25 at Magnolia Church in Riverside.

Don Fugate, pastor of Foxworthy Baptist Church in San Jose and chairman of the Board, introduced the recommendation during the Thursday plenary session, telling members the executive committee had “discussed the reduction” in recent years and felt it necessary for the Board to be more effective.

If approved by messengers to the CSBC annual meeting, the reduction will be achieved through attrition.

The recommendation received more discussion than any other presented during the two-day Board meeting, as members questioned the motion’s impact on statewide representation, though the recommendation does not suggest changes in regionalization or how Board members currently are selected.

At least two Board members voiced concern that they hadn’t had enough time to adequately consider the recommendation since it was not published in advance with other materials. Fugate delayed the vote until the Friday morning session.

At the time of consideration, the recommendation passed with one dissenting vote.

Board members approved a three-pronged recommendation requesting the CSBC committee on resolutions, credentials and membership alter its process for approving churches to affiliate with the Convention. The Board asked that new congregations functioning as a mission of a currently-

cooperating church not be required to engage in the affiliation process until it sought to incorporate as an autonomous congregation.

The other two requests relate to working with local Baptist associations to develop a single application for both associations and the Convention. Congregations that have been assessed and affiliated by an association using the cooperative process will not be required to complete a separate process.

At their Thursday evening dinner, Board members honored Tony Ahaev on his retirement from CSBC after 27 years of service. Ahaev served with and led church starting for the Convention, as well as working closely with CSBC’s Russia/Ukraine partnership.

An Executive Board bylaw amendment introduced during the May meeting eliminating a duty for the board operations committee dealing with a sub-committee — to help oversee Jenness Park Christian Camp — was approved.

The strategic ministries committee introduced a bylaw amendment to change one of its duties and to transfer two others to the executive committee.

— approved the transfer of accumulated earnings from CSBC trusts and endowments to revenue as needed to meet budget requirements for 2017;