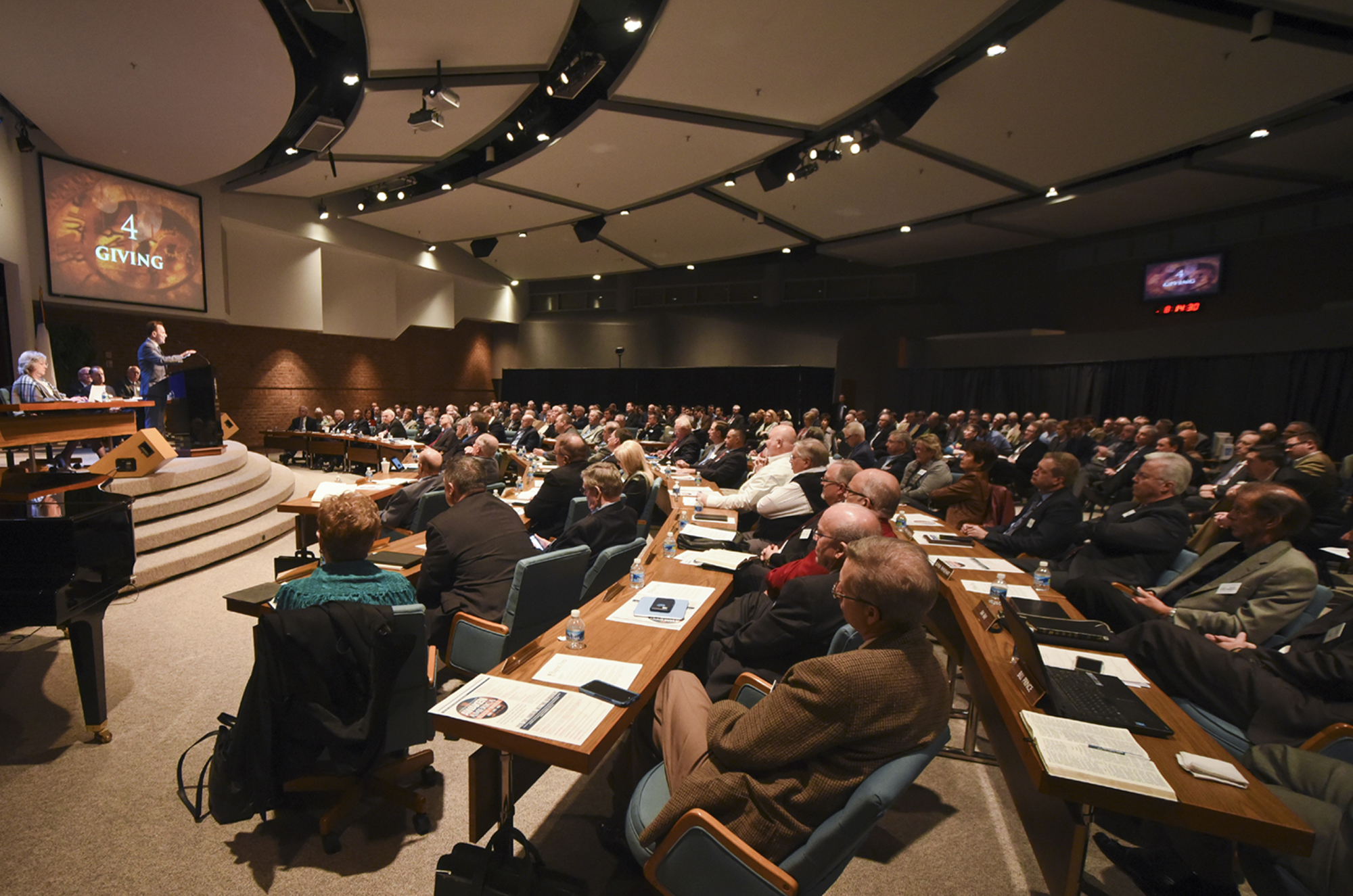 NASHVILLE (BP) — The Southern Baptist Convention Executive Committee’s 100th anniversary will be marked by a “low-key” celebration, says EC President Frank S. Page, because by design the committee has never been characterized by publicity and attention.

Unbeknownst to many Southern Baptists, Page told Baptist Press, the EC has been a “quiet, behind-the-scenes, steady hand that has helped guide and direct [the SBC] over the years.”

From shepherding the fledgling Cooperative Program and averting a convention-wide financial crisis in the early 20th century to spurring the 1963 Baptist Faith and Message and steadying the convention following the Conservative Resurgence, the EC has influenced the SBC at numerous key junctures.

For its first seven decades of existence, the SBC carried out its work between annual meetings through “numerous ad hoc committees,” according to Albert McClellan’s book “The Executive Committee of the Southern Baptist Convention.” But that organizational structure “simply could not carry the increased [work] load in the twentieth century.” In 1910, for instance, the convention appointed 33 separate committees, and many Southern Baptists realized the convention needed a more business-like structure.

Begun with seven members, the EC was charged, among other duties, “to act for the convention during the interim … on all matters not otherwise provided for” and to advise

convention boards “only on request.”

A decade later, the convention enlarged the EC and expanded its duties to include recommending an operating budget for the SBC each year and an annual allocation of Cooperative Program funds to entities. The expanded EC was granted “full authority to study the affairs of the agencies of the Convention, and to make suggestions,” but it still lacked authority over any SBC entity.

As the EC administered the Cooperative Program, established in 1925, among its greatest challenges was to help the convention pay off some $6 million in debt — a sum equivalent to about $84 million in 2017 according to the U.S. Department of Labor.

So great were the pressures of this debt-laden period, McClellan wrote, that EC executive secretary Austin Crouch carried a resignation letter to each SBC annual meeting in case messengers’ frustration boiled over. “Happily,” McClellan noted, Crouch “never had to use” the letter and the SBC was debt-free by 1943, annual CP receipts having increased by 234 percent during the previous decade.

Financial stability in the convention allowed the EC to address new challenges in the 1940s-1950s.

In a lighter matter during McCall’s 1946-51 tenure at the EC, the committee’s staff eliminated the hyphen from “Co-Operative Program” because director of publicity C.E. Bryant “tired of using two extra finger strokes” on his typewriter to type the hyphen and capitalize the subsequent “o,” according to McCall’s oral history published in 2001.

Doctrinal and social issues were among EC priorities in the 1960s under the leadership of executive secretary Porter Routh, who served from 1951-79.

In 1962, amid controversy over Midwestern Baptist Theological Seminary professor Ralph Elliott’s claim the book of Genesis was not “literally true,” an EC recommendation led to formation of a committee that drafted the 1963 Baptist Faith and Message.

Following the assassination of civil rights leader Martin Luther King Jr. in 1968, the EC recommended and the convention adopted the then-controversial “Statement Concerning the Crisis in Our Nation” — a document that “affirmed God’s love for all men of all continents and colors, of all religions and races.”

A key initiative of the 1970s was Bold Mission Thrust, an EC-proposed campaign adopted by the SBC in 1978 “to enable every person in the world to have the opportunity to hear and to respond to the gospel of Christ by the year 2000.”

The SBC’s Conservative Resurgence of the 1980s and 1990s found the EC “at the epicenter of” conflict, said David Hankins, an EC member from 1986-94 and chairman in 1991-92. He served as a vice president on the EC staff from 1995-2004 before assuming his current role as executive director of the Louisiana Baptist Convention.

When the group attempting to turn the SBC in a more theologically conservative direction achieved a majority on the EC around 1990, two of their most significant actions, Hankins told BP, were dismissing allegedly biased BP leaders Al Shackleford and Dan Martin in 1990 and proposing an amendment to the SBC Constitution in 1992 which declared churches that condone homosexuality to be “not in friendly cooperation” with the convention.

EC meetings in the 1980s and early 1990s were “very political,” Hankins said. “It was a very charged atmosphere. In those days … the gallery was packed out” and guests “would holler from the grandstands about the proceedings.”

David Maddox, who chaired the EC from 1985-87, told BP that President Harold Bennett was a steadying force during that era.

Bennett, who led the EC from 1979-92, “was so able” as an administrator, said Maddox, a California real estate developer. “Harold was a very, very strong [president] and served both sides” of the SBC conflict.

Following the Conservative Resurgence, the EC helped shepherd the SBC through what former EC President Morris Chapman called “the stabilization of the convention.”

Part of that stabilization was adoption by the convention in 1995 of the Covenant for a New Century, a plan that streamlined the number of SBC entities from 19 to 12 and whose implementation was overseen by the EC.

Another part of the EC’s post-Resurgence work, Chapman told BP, was reemphasis of the Cooperative Program.

“During my 18 years as president of the Executive Committee,” Chapman said, “I increasingly became convicted that the Cooperative Program had to be the most brilliant means of financial support ever known to any denomination. Everywhere Southern Baptists leaders fellowship with non-Southern Baptist leaders, one of their first questions is, ‘Will you tell us about the Cooperative Program and why it has been such a success?'”

Since Chapman’s retirement in 2010, Page has led the EC to spearhead “a renewal of trust in cooperation” within the SBC, the current EC president said. That renewal has included attempts to mediate convention conflicts, a call for churches to increase their giving through CP by 1 percent of undesignated receipts and emphasis on involvement of various ethnic groups in SBC life.

Page has hired the first African American EC vice president and appointed advisory councils to make recommendations to him regarding the convention involvement of African Americans, Hispanics Asian Americans and other ethnicities.


Despite its achievements, the EC’s work remains unknown to many Southern Baptists.

Since at least the 1950s, EC employees have reported being introduced at speaking engagements as staff members of the Baptist Sunday School Board and later LifeWay Christian Resources — the entity that housed the EC until 1963 and that has been located nearby ever since.

“After a while I just quit correcting them,” Hankins said, “because how do you explain” to someone uninitiated in the nuances of SBC polity “what the Executive Committee is?”

Chapman believes the EC remains a low-profile aspect of SBC life “because its primary job is to do what it does for the welfare of the convention entities and the churches,” not to promote itself.

The lack of notoriety is fine with Page, he said, because his daily prayer is that the EC would facilitate and highlight the work of other entities to make disciples of every nation on earth. That’s why he plans to keep the 100th anniversary celebration discrete, with a modest reception in September.

“When the other entities succeed,” Page said, “we’ve hit a homerun.”