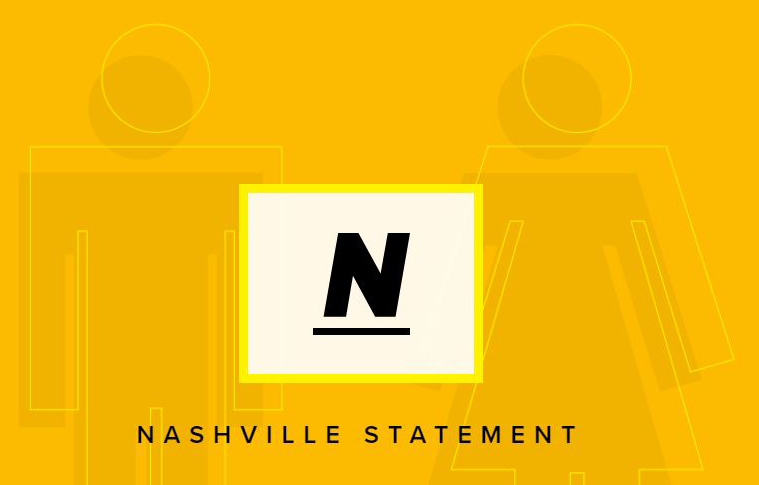 NASHVILLE (BP) — A coalition of evangelical leaders, including about 70 Southern Baptists, has issued a statement on biblical sexuality countering the idea that Christians “should agree to disagree” in their views of homosexual practice and transgenderism.

The Council on Biblical Manhood and Womanhood (CBMW) announced today (Aug. 29) the release of The Nashville Statement, which consists of 14 affirmations and denials consistent with the church’s long-held teaching on human sexuality.

The article that may gain the most attention is the document’s declaration on the acceptability of evangelical disagreement regarding the issues of homosexuality and gender identity.

Article 10 says, “WE AFFIRM that it is sinful to approve of homosexual immorality or transgenderism and that such approval constitutes an essential departure from Christian faithfulness and witness. WE DENY that the approval of homosexual immorality or transgenderism is a matter of moral indifference about which otherwise faithful Christians should agree to disagree.”

The statement — and Article 10 in particular — arrives at a time when some self-identified evangelicals have revised their views on human sexuality, particularly by affirming same-sex relationships and marriage. Others have asserted the issues are not essential to the Christian faith and evangelicals should be able to disagree on homosexuality and transgenderism without breaking fellowship.

The statement gained its name from a meeting CBMW convened Aug. 25 in Nashville at which a coalition of scholars, pastors and other evangelical leaders discussed and endorsed the document. The Southern Baptist Ethics & Religious Liberty Commission (ERLC) hosted the meeting during its national conference and in conjunction with its Research Institute meeting.

In “the hope of serving Christ’s church,” the statement includes these declarations:

— God designed marriage as a covenantal union of only a man and a woman that is the sole context for sexual intercourse.

— God created male and female as equals but with differences intended for human flourishing.

— Adoption of “a homosexual or transgender self-conception” is inconsistent with God’s purposes.

— Same-sex attraction is not part of God’s original design, but people who experience such attraction may live fruitful lives through faith in Christ as they practice purity.

— People born with a sex development disorder possess the same “dignity and worth” as all other image-bearers of God.

CBMW President Denny Burk said the statement’s aim “is to shine a light into the darkness — to declare the goodness of God’s design in our sexuality and in creating us as male and female.”

The coalition hopes to “provide help for churches and Christian organizations that are looking for biblical guidance on how to address homosexuality and transgenderism,” said Burk, also professor of biblical studies at Boyce College, the undergraduate school of Southern Baptist Theological Seminary in Louisville, Ky. It also seeks to build a group of “like-minded evangelicals to stand together for the challenging days ahead” and to encourage young evangelicals who are under pressure to desert biblical teaching, he said in a written statement.

Steve Gaines, president of the Southern Baptist Convention, said in a statement to Baptist Press, “Never in my lifetime has there been more confusion in American culture regarding sexuality. Yet, the sacred Scriptures have not changed, nor will they.

“A faithful reading of the Bible shows that God’s standard regarding sexuality in general and marriage in particular is between one man and one woman for life. The Nashville Statement affirms that biblical viewpoint clearly and graciously. I am glad to endorse this wonderful statement of biblical truth,” said Gaines, pastor of the Memphis-area Bellevue Baptist Church.

ERLC President Russell Moore described the statement as “an urgently needed moment of Gospel clarity.” He said in a written endorsement, “The Sexual Revolution cannot keep its promises, and the church must stand ready to receive with compassion the many who are in need of a better hope. The Nashville Statement is part of that mission, and my prayer is that it will help anchor churches and Christians to the Gospel of Jesus Christ for years to come.”

Piper, founder of Desiring God, said in a written endorsement the statement “speaks with forthright clarity, biblical conviction, Gospel compassion, cultural relevance, and practical helpfulness. It touches the most fundamental and urgent questions of the hour, without presuming to be a blueprint for political action.”

In written comments, Page said he was honored to sign a statement that “contains such a strong biblical worldview and clear statement of how believers should relate within the complexities of our 21st Century world.”

Andrew Walker, director of the ERLC’s Research Institute, said in an endorsement, “We are pleased to offer this statement as a faithful expression of Christian conviction in a secular age.”

Nashville Mayor Megan Barry, however, took exception to the name and the content of The Nashville Statement, tweeting: “The @CBMWorg’s so-called ‘Nashville Statement’ is poorly named and does not represent the inclusive values of the city & people of Nashville.”

The new declaration comes 30 years after the adoption of CBMW’s founding document, The Danvers Statement, in response to evangelical feminism. That document, approved in a 1987 meeting at Danvers, Mass., articulated “complementarianism,” which CBMW describes as “the biblically derived view that men and women are complementary, possessing equal dignity and worth as the image of God, and called to different roles that each glorify him.”

The Nashville Statement is available online at cbmw.org.