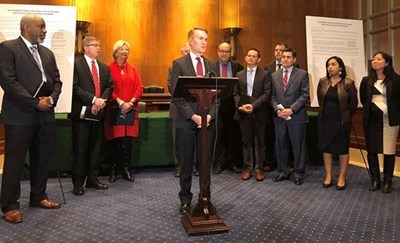 The appeal in a Capitol Hill news conference came less than a month before the expiration of a program — known as Deferred Action for Childhood Arrivals (DACA) — that has given about 800,000 people relief from deportation. If no legislative resolution is achieved by March 5, an estimated 1,000 people a day will lose their protection from deportation.

President Obama established DACA by executive order in 2012 to protect undocumented immigrants who arrived in this country before their 16th birthday. The Trump administration announced Sept. 5 it would end DACA but also instituted a six-month delay for Congress to act.

The Southern Baptists and evangelicals who spoke to reporters Feb. 7 said they were not endorsing a specific bill but calling on and praying for Congress and the White House to act before the deadline on behalf of Dreamers, a label that stems from the name of a bill introduced to protect this category of immigrants.

“We’re here today to speak to the consciences of our elected leaders to say, ‘Do not make invisible our Dreamer neighbors and our refugee neighbors,'” said Russell Moore, president of the Southern Baptist Ethics & Religious Liberty Commission (ERLC).

The Christian leaders are saying to elected officials, Moore told reporters, “Do not simply kick this down the road. Do not ignore these people created in the image of God.”

Sen. James Lankford, R-Okla., a Southern Baptist, said at the news conference, “This is a unique moment that I think we’re standing in — that there’s a deadline and a requirement to actually act on some issues related to” Dreamers.

He is encouraging fellow senators to “not stop the work,” Lankford told reporters. [F]or these families that are waiting for this moment, they need to know what is the decision, what direction are we actually going in the law.”

Sen. Angus King of Maine, an independent who caucuses with Democrats, said Majority Leader Mitch McConnell has indicated he would bring “a kind of bare-bones bill” to the floor next week that would initiate an amendment process that would hopefully result in passage and momentum going forward to the House of Representatives and president.

“We’re not going to solve the whole [immigration] problem in the next week,” King told reporters. “We’re not going to solve all of the complicated — and believe me, they are complicated — issues involved in the immigration issue, but perhaps we can solve a piece of it, and we can do right by these young people who came here through no fault of their own …”

Moore and other Southern Baptists explained to reporters the significance of Dreamers and refugees in congregations.

“These numbers represent people, who are integral parts of our congregations — church members, Sunday school teachers, students, employees, community leaders and even seminary-trained pastors, who are facing very real fears for the future if Congress doesn’t act,” he said.

Thabiti Anyabwile, pastor of Anacostia River Church in Washington, D.C., shared about immigrants and refugees in the church and told reporters, “These are the folks that make up our churches. They’re not just families out there. They are indeed our family. And many are in great need.”

Eric Costanzo, senior pastor of South Tulsa Baptist Church, said the church is located in the most affluent section of Tulsa, Okla., but now has people from 30 different countries in its building weekly. “We have been blessed to engage refugees and Dreamers and to call them part of our church family,” he said.

World Relief, an evangelical humanitarian aid and refugee resettlement organization, convened the news conference and also sponsored a full-page letter to Congress and Trump that appeared in the Feb. 7 edition of The Washington Post. The letter — signed by Southern Baptist and other evangelical leaders and pastors — requested government officials remember Dreamers, refugees, persecuted Christians and families seeking reunification as they work on legislation.

In early October, Moore brought together 51 evangelical leaders — including four former SBC presidents — in a statement endorsing “the underlying policy aim” of DACA “because we believe this is a special category of immigrants who are not legally culpable, who in most cases have no home other than the United States, and who are a blessing to their communities and to their churches.”

In 2001, members of Congress proposed for the first time the Development, Relief and Education for Alien Minors (DREAM) Act — hence the name Dreamers for those in this category of undocumented immigrants. The measure gained reintroduction several times thereafter without passing before Obama acted in 2012.

The effort to provide a solution for Dreamers is only one of many issues involved in reforming America’s immigration system. An estimated 11 million undocumented immigrants are in the United States, but efforts to enact a comprehensive measure have failed.

Messengers to the 2011 SBC meeting in Phoenix approved a resolution on immigration reform that called for the advancement of the Gospel of Jesus while pursuing justice and compassion. The measure urged the government to make a priority of border security and hold businesses accountable in their hiring. It also requested public officials establish after securing the borders “a just and compassionate path to legal status, with appropriate restitutionary measures, for those undocumented immigrants already living in our country.” It specified the resolution was not to be interpreted as supporting amnesty.

The resolution acknowledged immigration reform “has prompted often-rancorous debate in the American public square.” Southern Baptists also have various views on how to address the immigration problem. During consideration of the resolution, an amendment to remove the paragraph regarding establishment of a “path to legal status” failed in a ballot vote of 51-48 percent.