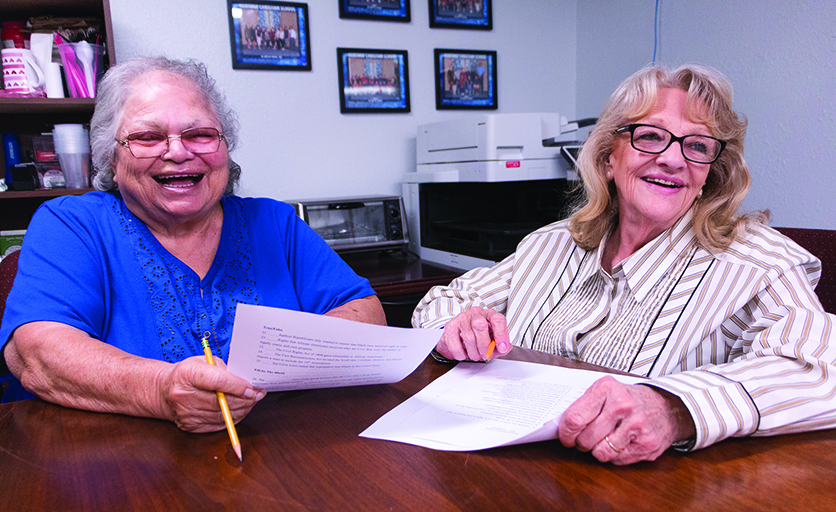 LAKE FOREST — When Maria immigrated to California from Mexico, she knew she would need to learn English. What she didn’t know was that, in doing so, she would also come to know Jesus Christ as her Savior.

as-a-second Language (ESL) school to Spanish-speakers. Today it is led by Sue Thompson and Rosie Montoya and supported by a team of volunteers.

Maria became a student, and she quickly became a friend to Thompson and Montoya. Looking for a job, Maria applied for an open position in the church nursery. As Montoya helped her new friend fill out the job application, Maria read the question, “How long have you been a Christian?” and turned to Montoya, saying, “I don’t understand.”

The plan of salvation was shared, and Maria “accepted the Lord right there on the spot,” Montoya recalled.

“She has become a faithful, faithful person,” getting involved in the church’s English-speaking congregation and also teaching a Spanish Sunday school class.

“She became a good friend and sister in the Lord,” Montoya said.

Such stories of lives changed for eternity fuel Thompson and Montoya’s passion for the ministry that unexpectedly became part of their lives about 15 years ago. At that time the program director was moving and searching for someone to take her place. She approached Thompson, who agreed to think and pray about the opportunity but also felt some uncertainty — she didn’t speak Spanish and wasn’t sure she would understand the people she would be working with.

“It wasn’t anything I had thought about doing, but I felt called,” Thompson said.

Only a couple of weeks after she said yes to the ESL opportunity, she asked her friend, Montoya, who was born in Mexico, to serve as co-leader.

“God is certainly working in our church’s ESL program,” Montoya said. “If you see God working, jump in and join Him!”

She “jumped in” with her friend, and the two haven’t looked back.

“It’s such a wonderful ministry. This is where the Lord led us to serve and work,” Montoya said.

Ministries such as ESL are undergirded by the California Mission Offering (CMO). The 2017 CMO theme, “It Begins with YOU,” resonates with the two women.

“If all of us would take one little area to work for God’s Kingdom, it would be a completely different world,” Montoya declared.

Each individual Christian should respond when called by God to a particular ministry and not wait for others, she added.

“It has to begin somewhere.”

Today the ESL school offers six classes using four books, from basic to accelerated to conversational English, with students attending two evenings a week. One night each week, a Hispanic pastor shares a “sermonette.” Many students ask for prayer, and scripture memorization is encouraged.

“We are creative in teaching them to know Jesus,” Thompson said. The school conducts Thanksgiving outreach in the community and hosts a Christmas party.

Montoya and Thompson try to be flexible with the classes, meeting students at their point of need. For example, students often express challenges in their workplace because of their limited English. One, a restaurant worker, asked how to say the names of vegetables for risk of being fired. Another, a construction worker, asked how to ask to go to the bathroom — his boss wouldn’t let him go unless he asked in English.

“It’s a harsh life” for the immigrants, Thompson said.

The students “become a part of your life; they are friends,” she added. “They are so appreciative of anything you do for them.”

Over the years, Thompson and Montoya’s steps may have slowed, but their enthusiasm for serving where they believe God called them hasn’t dimmed.

“I pray to the Lord to keep me going and keep me there,” Montoya said.

The blessings she gets from answering God’s call to ESL are triple any blessings she might offer others, Montoya noted, reflecting on what she may have missed had she not said yes to God’s call 15 years ago.