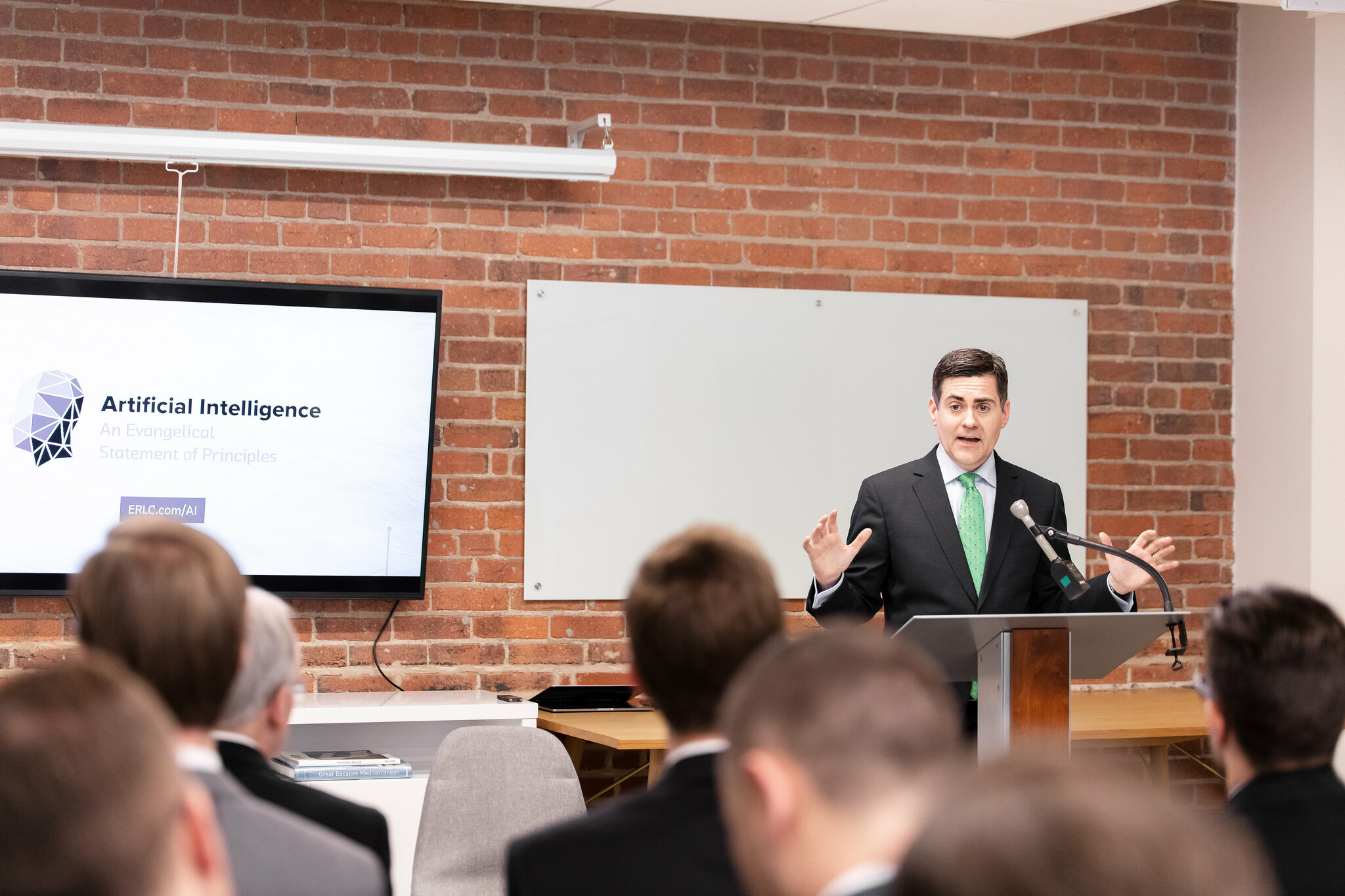 The ERLC issued the document — “Artificial Intelligence: An Evangelical Statement of Principles” — signed by nearly 70 Southern Baptist and other evangelical leaders during an event in Washington, D.C. The statement comes at a time when artificial intelligence (AI) is growing in use with such products as Apple’s Siri and Amazon’s Alexa to driverless cars and applications in such fields as business, finance, health care and the military.

The new statement, a project of the ERLC’s Research Institute, is designed to help the church think about and engage AI from a biblical perspective. It affirms each human being is made in God’s image “with intrinsic and equal worth, dignity, and moral agency, distinct from all creation.” It also declares AI’s development “is a demonstration of the unique creative abilities of human beings.”

The statement acknowledges the risks involved if AI is used “without wisdom and care.” It says tools such as AI can “be designed and used in ways that dishonor God and devalue our fellow image-bearers.” The signers recognize, however, AI “will allow us to achieve unprecedented possibilities.”

ERLC President Russell Moore told those gathered for the declaration’s release, “What this statement does is to say artificial intelligence is an aspect of creativity and technology that will bring with it many, many good things and not simply in the economic arena.

“At the same time, we have very real and pressing moral and spiritual questions about the use of AI, the temptation to outsource moral decisions to algorithms, but also what happens when we lose a vision of what humanity actually is,” he said, adding the statement’s signers have “the deep conviction” that “human beings are not simply collections of data, that human beings are a mysterious and complex image-bearing of God Himself and that the incarnation of our God in the person of Jesus Christ ought to cause us to have a different way of seeing humanity and our fellow human beings.”

The statement — signed by pastors, ethicists, academics, and ministry and technology leaders — says, “Christians must not fear the future or any technological development because we know that God is, above all, sovereign over history, and that nothing will ever supplant the image of God in which human beings are created.

“God alone has the power to create life, and no future advancements in AI will usurp Him as the Creator of life. The church has a unique role in proclaiming human dignity for all and calling for the humane use of AI in all aspects of society.”

Technology such as AI is a tool God has given human beings to live out their callings, and “nowhere in Scripture do you see the tool itself being condemned for being evil or bad,” Thacker said. “It is human beings that are evil and sinful and broken.”

Creating such tools “is good if it is used in the proper context of glorifying God and loving our neighbor,” he told the audience. The pursuit of AI must be driven “not from a place of fear or apathy but from a proper understanding of human dignity derived from the truth that every single human being is created in God’s image.”

The evangelical statement is “not a fearful document,” said Thacker, whose book on AI will be released in March 2020. “It’s a document full of hope and looking forward and engaging with wisdom because we know the Author of all truth.”

At the event, Taylor Barkley, program officer for technology and innovation at the Charles Koch Institute, stressed the importance of focusing “on what AI really is rather than debate its fictional conceptions. But wisdom means looking at the potential benefits in light of known risks.”

The statement makes clear the distinction between humanity and AI, saying, “We deny that humans can or should cede our moral accountability or responsibilities to any form of AI that will ever be created. Only humanity will be judged by God on the basis of our actions and that of the tools we create. While technology can be created with a moral use in view, it is not a moral agent.”

The document offers affirmations and denials in 12 articles, including on such categories as medicine, sexuality, work, privacy, security and war.

The event included a panel discussion moderated by Thacker on AI and foreign policy that featured Moore; Mark Tooley, president of the The Institute on Religion & Democracy; and Megan Reiss, a national security expert.

The statement is available at https://erlc.com/resource-library/statements/artificial-intelligence-an-evangelical-statement-of-principles.