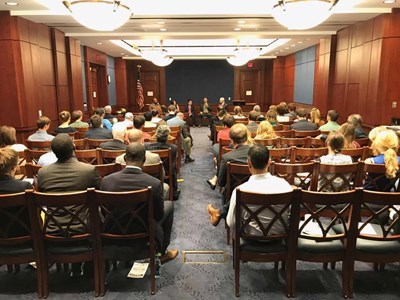 WASHINGTON (BP) — Christians should turn to diverse sources, practice patience and humility, and extend grace in a culture plagued by fake news and mistrust of the media, Southern Baptist ethicist Russell Moore and a panel of journalists said May 2 on Capitol Hill.

Two reporters and a congressional communications specialist joined Moore, president of the Ethics & Religious Liberty Commission (ERLC), to discuss the Christian response to the growth of intentionally misleading information, especially on social media, and the bias often perceived in the mainstream media — especially after the contentious 2016 election campaign.

The event, titled “Living in a Post-truth World,” was the latest in the ERLC-sponsored series known as Capitol Conversations, a periodic panel discussion in Washington, D.C.

Truth is not dead, but how much people care about truth is not doing well, Moore told the audience gathered in the U.S. Capitol Visitor Center.

“I don’t think it’s so much that you have people who don’t know how to differentiate between truth and falsehood as much as you have people who don’t want to carefully differentiate between truth and falsehood because all of us are trying to use media to back up the arguments that we’re already having” on social media and in other arenas, Moore said.

Jon Ward, senior political correspondent for Yahoo News, said of the current climate, “There’s no footing for a conversation around a shared set of facts, and everybody kind of has their own ways of thinking about how they want to view what’s true and what’s not.”

The panel’s suggestions for how Christians should live in such a time included:

— Listen to, watch and read news from a variety of sources.

[T]he answer is to consume multiple sources of news media and to intentionally seek out news that will have a different point of view than your point of view,” Moore said, adding it is important to understand “what people who disagree with us think.”

“Make sure that your media consumption is varied, even if it makes you angry,” he said.

If the news is inflammatory or controversial, “wait 24 hours before you decide what you think of the veracity of that report,” Ward advised.

“We all need to be a lot more comfortable with saying, ‘I don’t know. This is what I think, but I could be wrong.’ That is something that is badly needed in all sectors of all debates,” Ward said.

— Extend grace to those in the news media.

“When we see misleading representations, let’s have some grace,” Moore encouraged the audience.

Give grace to those who have had horrific experiences with religious organizations and to those who make mistakes, he said.

“It’s not the media’s job to present the beauty of the Gospel. That is the job of the church to do that,” Moore said. Christians’ primary goal is “to act in a way that is Christ-like, in a way that is honoring to Jesus and the Gospel,” he said.

While many evangelical Christians think “everyone who is working in media is inherently biased” against evangelicalism, he sometimes finds the things “some Christians take to be hostility are actually ignorance [on the part of] people who don’t have connection with people with a strong religious faith,” Moore said.

In an age of social media, Christians and others should recognize they are the media, Ward said.

“[W]hat is media other than a way of transmitting information,” he said. “All of us are using social capital to share information in a way that influences others; therefore, all of us are the media.”

Regarding Christian handling of social media, Moore said “the main thing” is not to take it “too seriously.”

“What I mean by that is social media isn’t driving your blood pressure,” he said. “Social media shouldn’t be able to make your day good or bad.”

Emma Green, staff writer at The Atlantic magazine, said she takes the responsibility of being a journalist “extremely seriously” as well as “the ebbing of public trust.”

“[D]ifferentiating between the struggle to practice journalism well, which we don’t always succeed at, versus people who genuinely want to mislead or manufacture information that is just not true is super important,” Green said.

Reporters should listen to and seek to understand religious communities, thereby building trust and practicing good journalism, she told the audience.

“The most valuable thing to me is getting thoughtful emails or thoughtful phone calls that help me to understand how I can do better,” Green said.

Jordan encouraged Christians to communicate with reporters. “If you are not telling your story, there are assumptions and opinions that are made about your faith-based organization that are flat-out wrong,” he said.

Previous Capitol Conversations events have included discussions of same-sex marriage and religious liberty, Planned Parenthood and the sanctity of human life, the Syrian refugee crisis, and the Supreme Court and abortion.