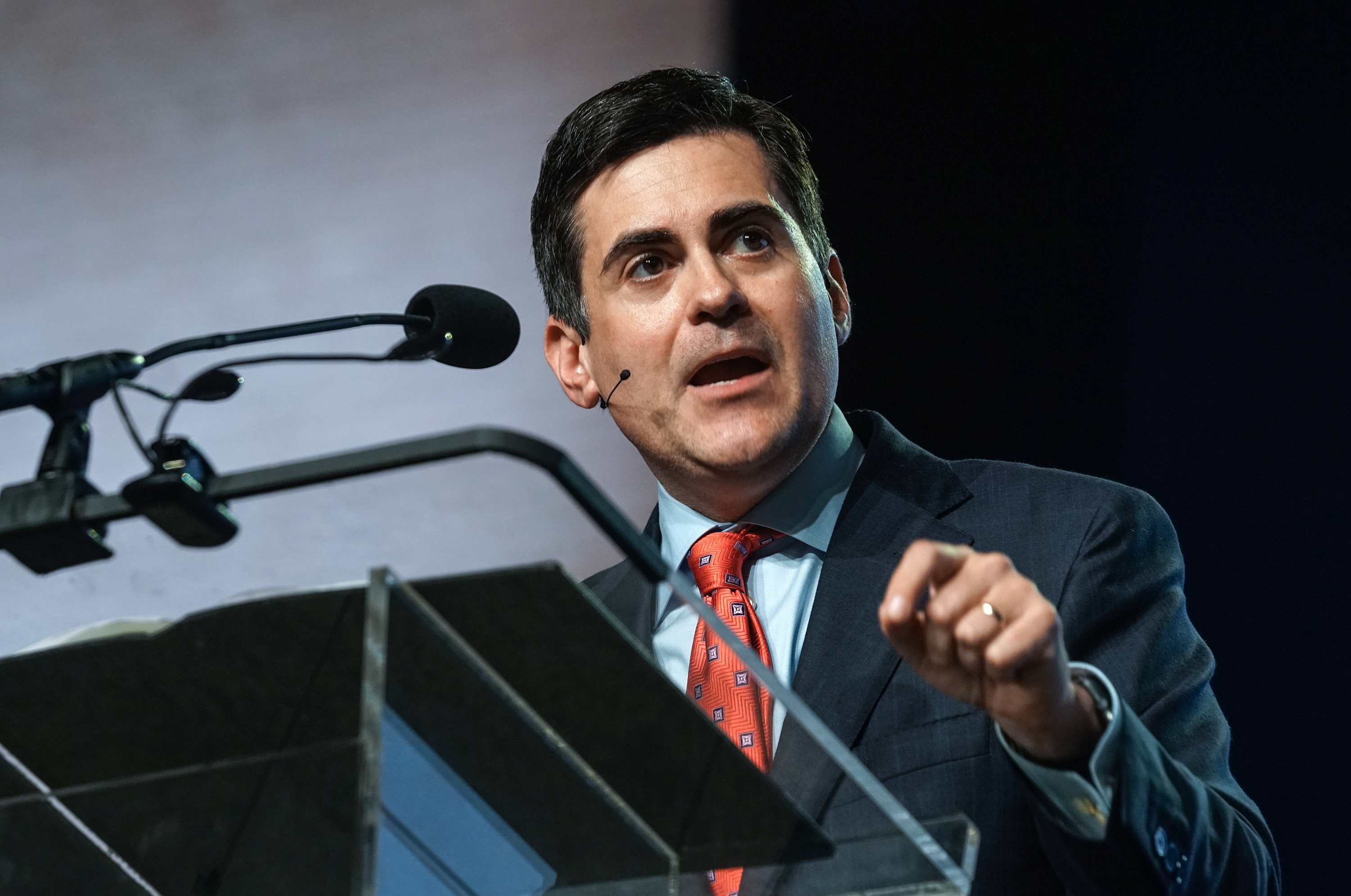 DALLAS (BP) — Russell Moore announced new initiatives on women and abuse during the report of the Ethics & Religious Liberty Commission Wednesday (June 13) at the annual meeting of the Southern Baptist Convention.

Moore, the ERLC’s president, said the entity will convene a women’s summit as a major part of its work in the year ahead. He also told messengers the ERLC is partnering with LifeWay Research in commissioning a full-scale study on the extent of abuse in churches.

The announcement of the initiatives followed months of what Moore described as “horrible, horrible revelations” of sexual abuse and assault. Those disclosures of abuse and misconduct by male leaders in churches and the secular world have rocked Southern Baptists, other evangelicals and the wider culture.

The ERLC will gather women from across the SBC and the evangelical world “to think through ways to enhance our ministries and invest in our churches,” Moore told messengers. “There should not be one inch of toleration for the abuse or mistreatment of women or others within our churches, and if we care about human dignity, we must be clear about that.

“I’m grateful that this [convention] has spoken with such clarity about what we believe about the dignity of women, our sisters in Christ and joint heirs in Christ.”

Of the study on abuse, he said, “When those findings are available, we’ll make them known to you. And whatever they reveal, your [ERLC] will be there to serve our denomination with resources and information that can help us conform our lives and ministries to the will of Christ and to make sure that we have every preventive measure in place to see to it that no one finds anything other than safety and refuge in the church of Jesus Christ.”

Another major event in the year ahead will be the ERLC’s 2018 national conference — “The Cross-shaped Family” — Oct. 11-13 in Dallas.

In the last year, the ERLC’s areas of focus have included, Moore said:

The Supreme Court twice has “reaffirmed freedom of conscience and religious liberty for everyone,” he said. In those cases, the high court ruled in favor of Trinity Lutheran Church in Missouri and Masterpiece Cakeshop in Colorado. The ERLC filed friend-of-the-court briefs in support of the religious freedom of both. Moore told messengers. [A]s Baptists, above all people, we must be the ones that stand up and say there is no expiration date on freedom of conscience.”

The ERLC has worked to continue its “unflinching focus on racial reconciliation and unity,” Moore said. In partnership with The Gospel Coalition, it co-hosted MLK50, an April conference in Memphis on the 50th anniversary of the assassination of civil rights leader Martin Luther King Jr.

The ERLC joined with Focus on the Family for the third consecutive year to co-host the Evangelicals for Life conference in January in Washington, D.C “We spoke very clearly that it is time for the reborn to stand up for the unborn,” Moore said. It also continued its ministry through the Psalm 139 Project to provide ultrasound machines for pregnancy resource centers.

The ERLC has created resources on the biblical teaching on gender, sexuality and marriage “for churches to use not only in discipling our own people in those precious truths but also evangelizing those who don’t see things the way we do,” he said.

Moore encouraged the messengers to unite around “a common Gospel and a Great Commission.”

“We must be the people who not only sing ‘Jesus Loves Me’ but who work hard to protect all of those that Jesus loves,” he said.

During the ERLC presentation that followed the report, the locations of the 12 pregnancy centers in which ultrasound machines have been placed through Psalm 139 Project funds were displayed on a map of the United States. Eleven other potential sites also were shown on the map.

Nathan Lino, lead pastor of Northeast Houston Baptist Church, shared with messengers how the ERLC helped the church after flooding from Hurricane Harvey last year destroyed the ultrasound machine in the pregnancy center of the church’s mission in the city’s Fifth Ward.

The ERLC worked quickly to meet the need and partnered with Focus on the Family to purchase a new machine. In less than eight weeks, the center reopened with the machine in operation, he said.

“And so I’m standing before you today as one Southern Baptist pastor in the Southern Baptist Convention saying that for our congregation when we were in great need, the ERLC showed up,” Lino said. “And what Hurricane Harvey intended for evil, our Lord Jesus Christ redeemed for good.”