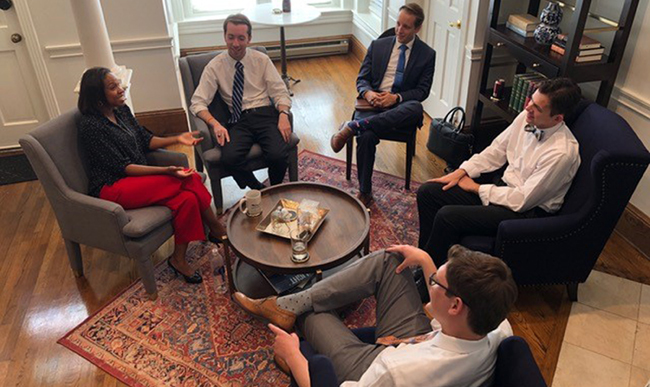 WASHINGTON (BP) — For the Southern Baptist Convention’s ethics entity, its internship program provides an opportunity to influence future Christian leaders. For its interns, it can bring a new direction in life.

The Ethics & Religious Liberty Commission (ERLC) completed in recent weeks its summer program with multiple interns in both of its offices — Nashville and Washington, D.C. The goal of the internship program, which also is in effect at other times of the year, is to equip undergraduate and graduate students, as well as young professionals, with a “Gospel-centered, kingdom-focused perspective” on ethical and religious freedom issues, according to the ERLC.

“Some of the most important work we do is invest in the next generation of leaders,” said Travis Wussow, who leads the ERLC’s Washington office as general counsel and vice president for public policy.

“We’re proud to attract the very best young Christians from around the country to spend a semester with our team on Capitol Hill,” he said in written comments to Baptist Press. “We train to send these rising leaders of faith back out to serve in our churches, academic institutions, law and government for many years to come.”

Daniel Darling, who is based in the Nashville office as vice president for communications, said the ERLC is “grateful for the opportunity, every summer, to invest in the next generation of leaders.”

“This year we were overjoyed to host interns from America’s leading institutions including many of our great Baptist colleges,” he noted in written comments. “Every time we do this we come away impressed with how God is raising up a new generation of leaders who will press the Gospel into the important issues of their own time.”

In recent years, the ERLC interns have included students from graduate schools such as Yale Divinity School, Princeton Theological Seminary, Talbot School of Theology and Wake Forest School of Law; from universities such as Florida State, Texas A&M, Missouri, American, Loyola, Louisiana Tech and Troy; from Baptist institutions such as Union University and Liberty University; and from other Christian schools such as John Brown University, Taylor University and Patrick Henry College.

The ERLC designs the internships to help participants develop spiritually and professionally.

In Washington, the intern development includes book reading and discussion, as well as the conversations on ethics among staff and interns that flow from them. Participants are involved in Washington-area churches, many that sponsor Bible studies for interns, according to the ERLC.

In Nashville, it involves book reading and discussion, staff-led Bible studies and theological/professional training, blog writing and a presentation on an ethical issue to staff and other interns.

Mary Wurster prepared her presentation as a Nashville intern this summer. A senior at Taylor University in Upland, Ind., Wurster tackled the ethics of pharmacological neurological enhancement, which is the use of drugs to increase brain function beyond normal.

“Researching and presenting a discussion on this topic expanded my interest in the field of biomedical ethics to the point that I am now considering continuing my education in this area,” she told BP in an email interview.

The “icing on the cake” for Wurster came when her revision of the presentation into an article was published on the ERLC’s website.

Zachary Jones, a recent graduate of Florida State University, told BP he learned “what it means to maintain a public faith in the political arena” during his summer 2017 internship in the Washington office.

“As I sat in on meetings with members of Congress and the executive branch, I watched ERLC staff members speak clearly on issues Southern Baptists care about and witnessed the power and attraction of a Christian attitude of convictional kindness, even in secular audiences,” he said in an email interview. “During our weekly intern book discussions, I learned how the Gospel connects with making schedules, sending emails and doing my work towards the glory of God.”

The ERLC also designs the program for meaningful input from the interns in both offices.

Responsibilities in the Washington office include analyzing federal legislation, drafting policy briefs to explain the ERLC’s positions, participating in the commission’s friend-of-the-court briefing practice, attending congressional hearings and helping support entity events on Capitol Hill. In the Nashville office, interns perform research, aid with website design and other projects, produce content for the website, assist in event planning and help with strategic initiatives among their duties.

Interning with the ERLC in the spring of this year aided Amanda Dixon in making the change from two years of overseas ministry with the Southern Baptist International Mission Board.

The internship was “incredibly helpful in transitioning from having that kingdom mindset on the field to applying that same kingdom commitment to policy and the public square,” said Dixon, now in her first year at Duke University School of Law. “It was an opportunity as I shifted into the legal and policy sphere to continue to apply biblical thought to how to process about what’s going on in those areas.”

Adoption and religious liberty in higher education were the issues she focused on most in her internship, Dixon told BP in an email interview.

“Now that I’m in law school my day to day studying often seems abstract,” she said. “From working on those issues, I can remember though that real laws affect real people and think back to the examples I learned while I was at the ERLC.”

The benefits of Wurster’s internship in Nashville included enabling her “to observe and learn from highly intelligent and committed individuals who are engaged in presenting a Christian worldview to a confused society,” having the opportunity to take part in projects that “are meaningful and have an impact on the organization,” working with other young people from across the United States and permitting her to develop her writing ability, she said.

“Although I received academic credit for my summer internship, I would have gladly participated in this experience without that benefit,” Wurster said.

For Jones, his internship — and a research grant from his university — provided him the chance to travel internationally on behalf of religious freedom.

He went to Malaysia with ERLC staff members in the Washington office to meet with political and religious leaders regarding restrictions on Christians in that Southeast Asian country. Jones also traveled with ERLC staff to Geneva, Switzerland, to report on religious persecution and offer recommendations on religious freedom in Malaysia to the United Nations Universal Periodic Review.

“The whole process was a humbling experience, especially for someone who has just finished his undergraduate degree, but it has helped me to identify the policy matters which most matter to me,” Jones said.

Information on the ERLC’s internship program is available at https://erlc.com/about/internships.