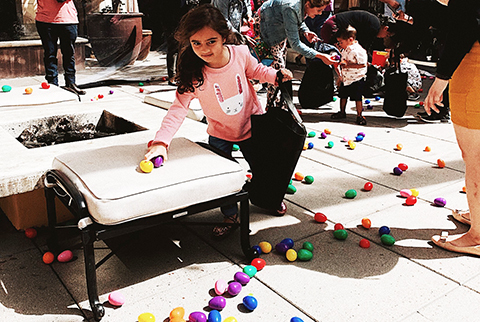 SAN JOSE — When a San Jose college student made a profession of faith in Christ this spring, he began inviting three of his nonbelieving friends — two of them atheists — to attend church on Easter. They resisted.

Finally, the new believer urged them to pray for a sign if God wanted them in church. They did, and that same day a pastor called to say their stolen car had been found in his church’s parking lot. Interpreting that as the sign they requested, the three nonbelievers attended Easter worship at San Jose’s CenterSet Church, having seen a billboard advertisement.

Within a week, two of the students had professed faith in Christ.

“I have goosebumps when I tell” the story, CenterSet pastor Ali Roohi said.

Their salvation testimony is among many stories of God’s work this Easter at CenterSet and Southridge Church — two San Jose church plants that made big investments in outreach and between them saw hundreds make first-time professions of faith.

Now, the churches are grappling with whether they can build on the momentum of Easter and stand firm amid the spiritual warfare that accompanies evangelistic success.

“The moment … you start seeing that many people saved,” Southridge pastor Micaiah Irmler said, “all of a sudden Satan is like, ‘OK, I’m coming for you.’”

Launched in September 2017, CenterSet was averaging 125-130 in worship as Easter approached. Yet in keeping with its value statement “faith is our focus,” the church “emptied the bank account” to hold and promote two Easter services at its rented hotel meeting space, Roohi said.

Attendance on Easter totaled 427, with four people making first-time professions of faith and an Easter egg hunt in the hotel courtyard following each service, Roohi noted.

“Even more remarkable,” attendance the week following Easter was 180, and the church has maintained two services each Sunday since.

“We couldn’t afford” such a major evangelistic event, Roohi said. But “we’re going to be extremely bold, and we’re not going to sit back in the most unchurched region in the country and just hope people come to Easter for one opportunity to give them the greatest message ever.”

Of the approximately 40 new CenterSet attendees generated by the Easter weekend, 25-30 percent previously were unchurched. The new families are “like a breath of fresh air,” Roohi said.

“There’s just something special about Easter.”

Southridge — which averaged 250 in worship in 2018 — continued its tradition of “epic Easter” events this year by renting the San Jose Giants’ minor league baseball stadium for a worship service attended by 4,500. The church was launched in 2014, with a “relaunch” in January 2017. The congregation receives funding from the California Southern Baptist Convention.

Following Irmler’s Easter message, plans for a come-forward altar call had to be abandoned because “hundreds and hundreds” of people raised their hands to indicate they had received Christ as Savior, Irmler recounted.

“God just moved,” and “there was no way people could come down to be dealt with, just because the stadium was so small.”

A week-and-a-half later, Southridge was evicted from the building it had been renting, a former roller-

skating rink. As a result, the congregation lost thousands of dollars in security deposits and prepaid rent. In addition, the church had only 72 hours to relocate the Sunday worship service. That left “thousands of people” from Easter “now looking for our location,” Irmler said.

Since then, attendance had been down, and Southridge has found a temporary meeting place in a high school. Irmler believes the troubles stem from spiritual warfare, and he requested prayer. Still, he said, reaching the lost is worth the spiritual opposition it brings.

This summer, both CenterSet and Southridge are working and praying, hoping their Easter success will lead some of San Jose’s formerly unchurched residents to develop a churchgoing habit.

“I’d love to see this fruit grow. We planted,” Irmler said, referencing I Corinthians 3:6. “I think we’re waiting for Apollos to water.”