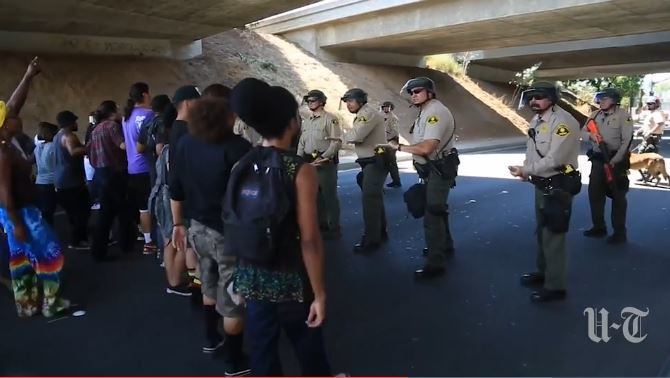 EL CAJON, Calif. (BP) — Southern Baptists are among an interdenominational group of pastors urging transparency, peace and unity in El Cajon, Calif., a week after police shot and killed Ugandan immigrant Alfred Olango, who was unarmed.

Rolland Slade, pastor of Meridian Southern Baptist Church in El Cajon and an officer with the Southern Baptist Convention Executive Committee, authored a statement on behalf of the East County Pastors Prayer Network that was read in Oct. 2 worship services in perhaps 40 churches.

“The events of Tuesday, September 27, 2016 were tragic and must be acknowledged. We (the region, community, neighborhood and the Olango Family) have been dramatically changed,” the statement reads. “We have been called for such a time as this. Our nation has seen division and separation long enough. Let us unify as the church, the children of God and use this moment in time to drive us forward to do and be better.”

El Cajon police approached 38-year-old Olango in response to a call that a pedestrian was behaving erratically and walking in traffic in a commercial district in the San Diego suburb of about 150,000 people, NPR reported. Police said they shot Olango after he repeatedly refused to remove his hand from his pocket, took what police called “a shooting stance” and pointed at police what turned out to be only a vape pen electronic smoking device.

Protests ensued almost immediately after the shooting and had continued, although deescalated. At least two civilians have been assaulted, bottles have been thrown at police, and at least 14 protestors have been arrested on charges including suspicion of failing to depart an unlawful assembly near the site of the shooting, according to news reports.

As early as Oct. 3 many businesses in downtown El Cajon had reopened, according to news reports, after having closed as protests began last week.

But protests had not been as violent as in other cities that have experienced police shootings of black men, many of whom were unarmed. Slade credits the relative calm to a longstanding Christian relationship between pastors and community members.

“We’re working together, we’re praying together and spending time together,” Slade told Baptist Press Tuesday (Oct. 4). “So we have those relationships, and I think that’s part of the reason why the response of the city has been different than in other places. Because we saw what was happening in other places and became proactive long ago.”

The pastors’ network met for prayer the night after the shooting and enlisted Slade to draft the statement, which was initially read at a Sept. 30 prayer meeting with 40 pastors outside the El Cajon City Hall and police department, housed in the same building.

God has responded to the pastors’ prayers with grace, Slade told BP.

“It’s kind of a statement and a prayer, and God has answered that,” Slade said. “The protesting in terms of being riotous so to speak, it’s never risen to that level. People are having dialogue with city leaders.”

Pastors have built relationships with city leaders, including El Cajon Mayor Bill Wells, police chief Jeff Davis, city council members and the schools superintendent, all of whom are Christians.

“We’ve helped them address the problems already, so they could immediately tap into our group without trying to establish relationships [at the last minute],” Slade said. He described the city as hurting but calm. Daily, pastors assemble at the site of the shooting to minister as needed and encourage healing.

“God has poured out His blessing because this is a situation that is a battle in the heavenlies, because we know that the evil one would not want all of those people working together across denominational lines for the shalom of the city, the welfare of the city,” Slade said. “And I think that we’re seeing a true picture of Jeremiah 29:7. That’s who we are.”

“Transparency must not only be our communication style, it must be how we deal with each other. There can be no hidden agendas,” the statement reads. “Transformation must come from these events. We must go beyond methodological and systemic change into the realms of societal, communal, spiritual and individual transformation.

“We need to be new men and the new man’s transformation begins within the heart,” Slade wrote. “There are tremendous hurts in this region and we must acknowledge that fact. We have been given the opportunity to cry out as the prophet did in Habakkuk 3:2: ‘Lord, I have heard the report about You and I fear. Oh Lord, revive Your work in the midst of the years. In the midst of the years make it known; in wrath remember mercy.'”

Police have released video of the shooting and have confirmed that Olango was unarmed. El Cajon police, the San Diego County district attorney and the FBI are investigating and have not issued a determination of whether the shooting was justified.

“Video evidence is one piece of the evidence,” district attorney Bonnie Dumanis said at a Sept. 30 press conference. “We want every bit of evidence.” Officer Richard Gonsalves shot Olango, police said, while Josh McDaniels fired a stun gun. Both officers have been on leave since the incident.