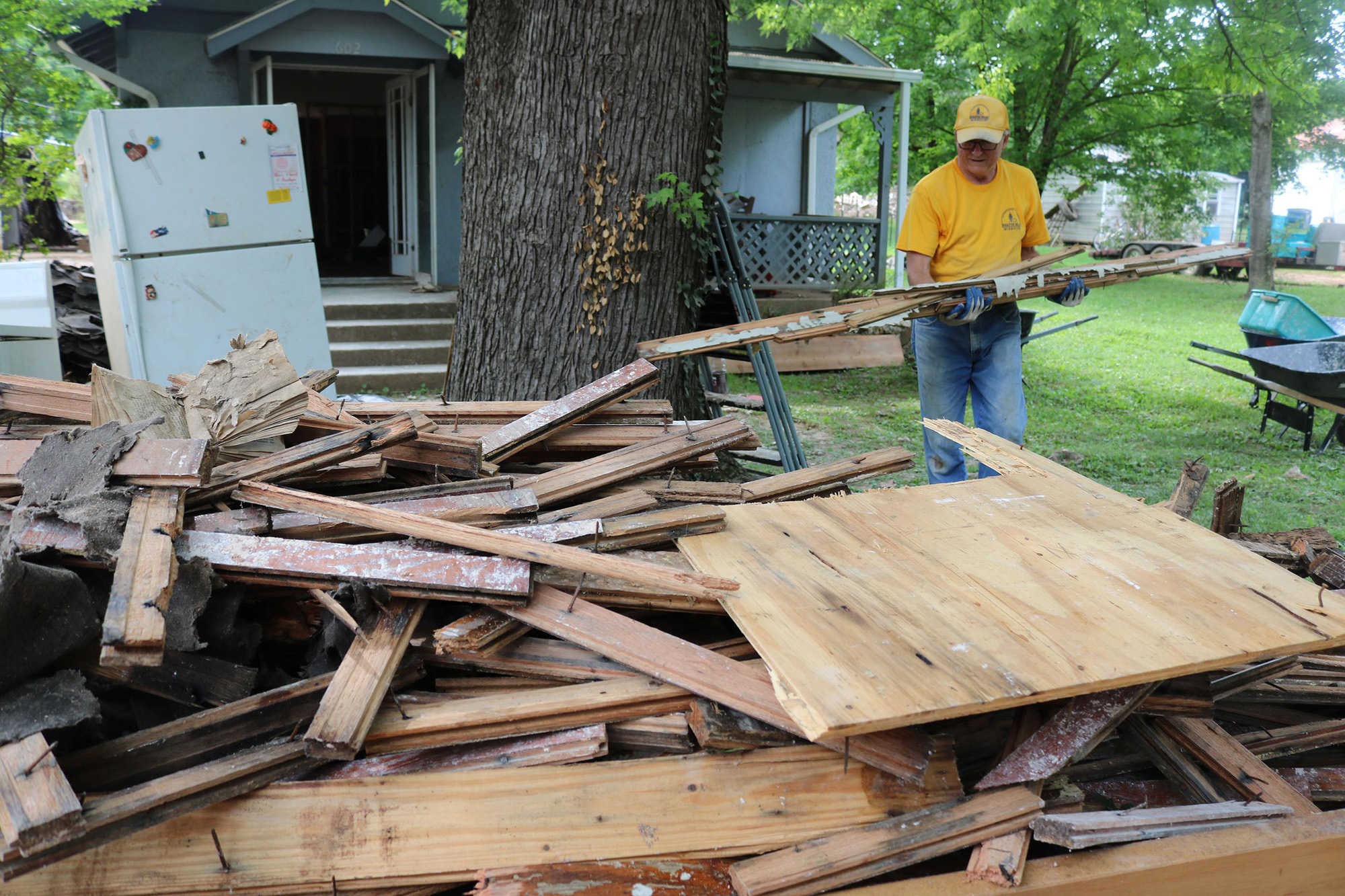 Disaster Relief: ‘You ain’t seen nothing like those Baptists’

OSAGE CITY, Mo. (BP) — It was cold, wet and windy somewhere between 2 a.m. and 5 a.m. as I watched the waters of the Osage River creep ever closer.

When the Cole County Sheriff activated his posse (a ready-to-go group of trained civilian volunteers and, no, we don’t chase after cattle rustlers) for flood duty, I changed into my uniform and immediately confirmed my availability. I thought I might spend the afternoon helping stranded citizens trapped in their homes during widespread flooding in southern Missouri in late April and early May.

Instead, I was placed with another volunteer and a deputy working the 2-5 a.m. shift, ensuring that no one dared enter Engineers Road in Osage City, which was at least five feet under water from the Osage River.

No one even came close to our road block, so we amused ourselves and stayed alert telling stories. Since I had a bit of a cold, I let the other two do most of the talking. Naturally, the conversation turned toward the flood and disasters in general. The other posse volunteer, an older gentleman, began telling stories of his time working with the Red Cross during Hurricane Katrina back in 2005.

He began talking about the rows of ambulance-like vehicles they’d fill with food to deliver to folks. I was ready to jump in with “You know who cooks that food, don’t you?” but the deputy was quick with a question.

“So where do you get the food?” he asked.

“It’s the Baptists,” the volunteer said. “Oh man, let me tell you. You ain’t seen nothing like those Baptists. They come roaring in with all kinds of trucks and trailers. They set up these huge kitchens, start cooking and they don’t stop until we tell them we don’t need any more. See, we have these big containers — I forget what we call them … sort of like a large ice chest….”

He looked at me in surprise. “Yeah, cambros! And they just keep filling them up with thousands of hot meals until no one within 100 miles is hungry.”

“They must have some big Baptist parishes down there” — churches we call them — “to have that kind of operation,” the deputy said.

Again, I tried to jump in and clarify.

“That’s the cool part!” my fellow posse member said. “They weren’t just local. There were trucks from Baptists all over the country. I even saw some from Missouri. You can tell where they’re from because they all wear these hats. Man, they’re really big on their hats. Some are white, some are pink and some are blue. Their whole operation is color-coded and they work like nothing you’ve ever seen and it’s all for free. And clean, boy, they kept that outdoor kitchen spotless. They were the hardest working group I’ve ever seen.”

I didn’t bother correcting him on the hat colors since he was doing such a great job telling the Baptist disaster relief story.

“You don’t bother the workers in the one color of hat because they’re locked in on their job like a laser. You have to go find someone in a blue hat to talk to the leader.”

My fellow volunteer continued, “I’d been in Florida that summer for Hurricane Dennis with the Red Cross and they were there too. They’re everywhere.”

I finally got to join the conversation in earnest, saying that I happen to have one those, ahem, yellow hats sitting on the desk at home. Not only am I the posse’s chaplain, I’m a Baptist disaster relief chaplain as well. I noted that even as we spoke during that April 30 graveyard shift, Missouri Baptist disaster relief volunteers were preparing to go to Neosho in southeast Missouri and wherever else they were needed to bring help, hope and healing.

I explained all the different things DR does in Missouri, the U.S. and even overseas — not just feeding, but child care, mud-out, chain saw, assessment, communication, showers, laundry, chaplaincy and more.

More importantly, I got to share why these people in color-coded hats did all that work after Katrina and why they are doing it this very minute. “Because Jesus loves us, and He wants us to love others,” I said. From there, I got to share the complete Gospel with both of them.

Neither man accepted Jesus there on the banks of the Osage River. It would have been amazing if they had, but almost just as amazing was the way the professionalism, sacrifice and testimony of Southern Baptist Disaster Relief workers — from Missouri and beyond — acted as a seed that lay dormant in this man’s memory for over a decade.

Their service became the living embodiment of Matthew 5:16: “In the same way, let your light shine before others, so that they may see your good works and give glory to your Father in heaven.” Their “good works” were indeed seen, and glory was given to God by those who didn’t even know Him.

Who knows how many other seeds they’ve sown and who else has seen their good works? Who knows what seeds they’re sowing or who is watching this very minute?