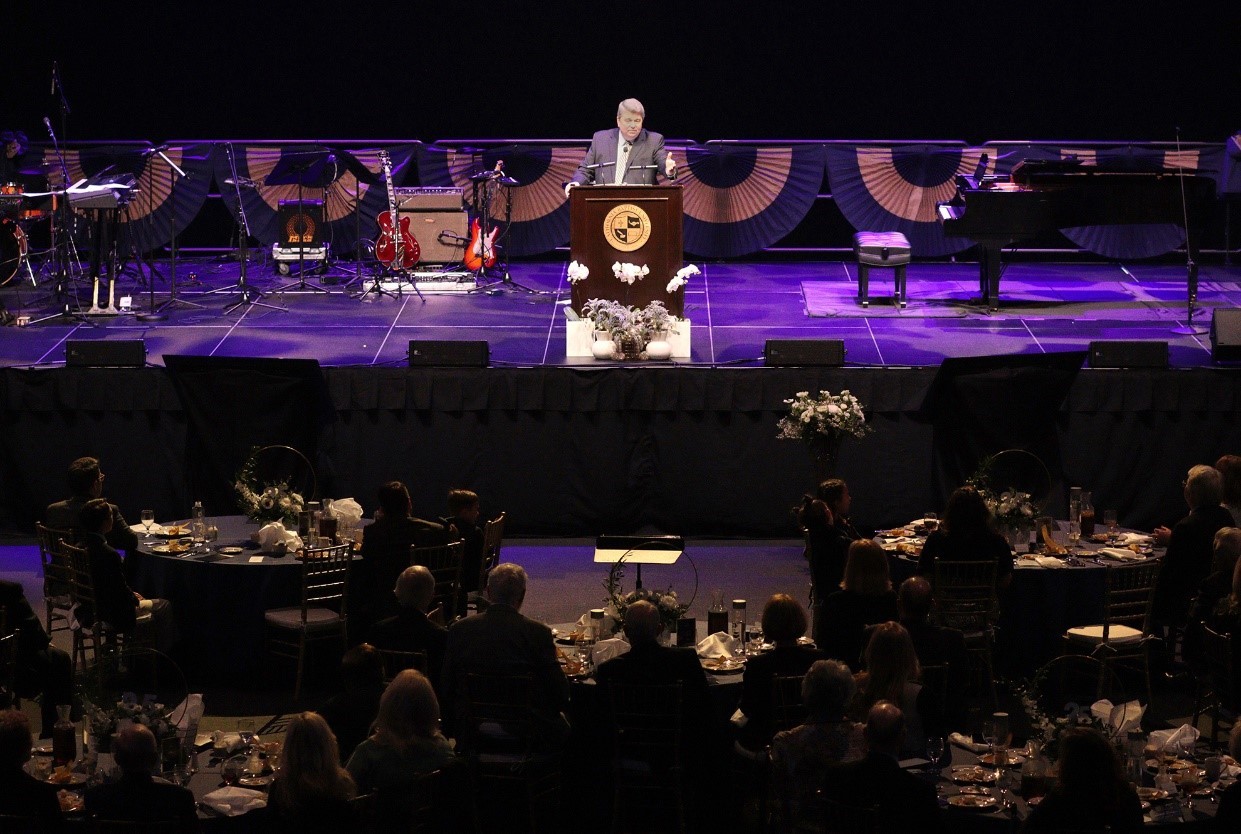 Ellis honored for 25 years of leadership

Riverside – More than 200 people attended an event celebrating the 25 years of Ronald L. Ellis as president of California Baptist University on Jan. 16. Ellis officially marked his 25th anniversary as CBU president on Nov. 1, 2019.

Since Ellis became president of then-California Baptist College, enrollment has grown from 808 to 11,045, an increase of 10,237 students. Under his leadership, CBC became California Baptist University in 1998 and now features 11 colleges and professional schools, offering more than 150 majors and minors with more than 30 master’s and five doctoral programs.

CBU’s main campus now comprises more than 160 acres and 30 buildings. The latest architectural additions to campus are the Athletics Performance Center, the East Parking Structure and the new main entrance to the campus from Adams Street.

Dr. Bob R. Agee, president emeritus at Oklahoma Baptist University, served as the keynote speaker for the event, which was held in the CBU Events Center.

Agee said that God raised up a special leader in Ellis for a fresh dream for higher education.

“CBU is committed to being academically strong, unapologetically Christian, and unashamedly Baptist with a global heartbeat that is impacting the world for Christ and His kingdom,” Agee said.

“Ron Ellis is the model of what stability and continuity and visionary leadership can do for an organization,” Bailey said. “He is locally minded but globally focused. I have observed Dr. Ellis in action. He is a leader of godly character with integrity, vision, courage and passion.”

Ellis, during brief remarks, credited God’s blessings for the success and growth at CBU. He reminded the audience that CBU is a “University Committed to the Great Commission.”

“No one person can do anything close to what’s been done here. You’ve got to have a team,” Ellis said. “Not only people who have the ability. But they have to have that passion that ‘I’m going to help the organization accomplish its mission. I’m going to live my purpose by helping the students and others in this organization live their purpose.’”

“There’s really no external limitations on what we [at CBU] can accomplish for the Lord,” Ellis said. “The only limitations that I think we have are our own internal things. I think the Lord will continue to bless this organization as we continue to walk on faith, getting out of that boat and walking on water. Thank you so much for making the last 25 years a ‘wow!’”