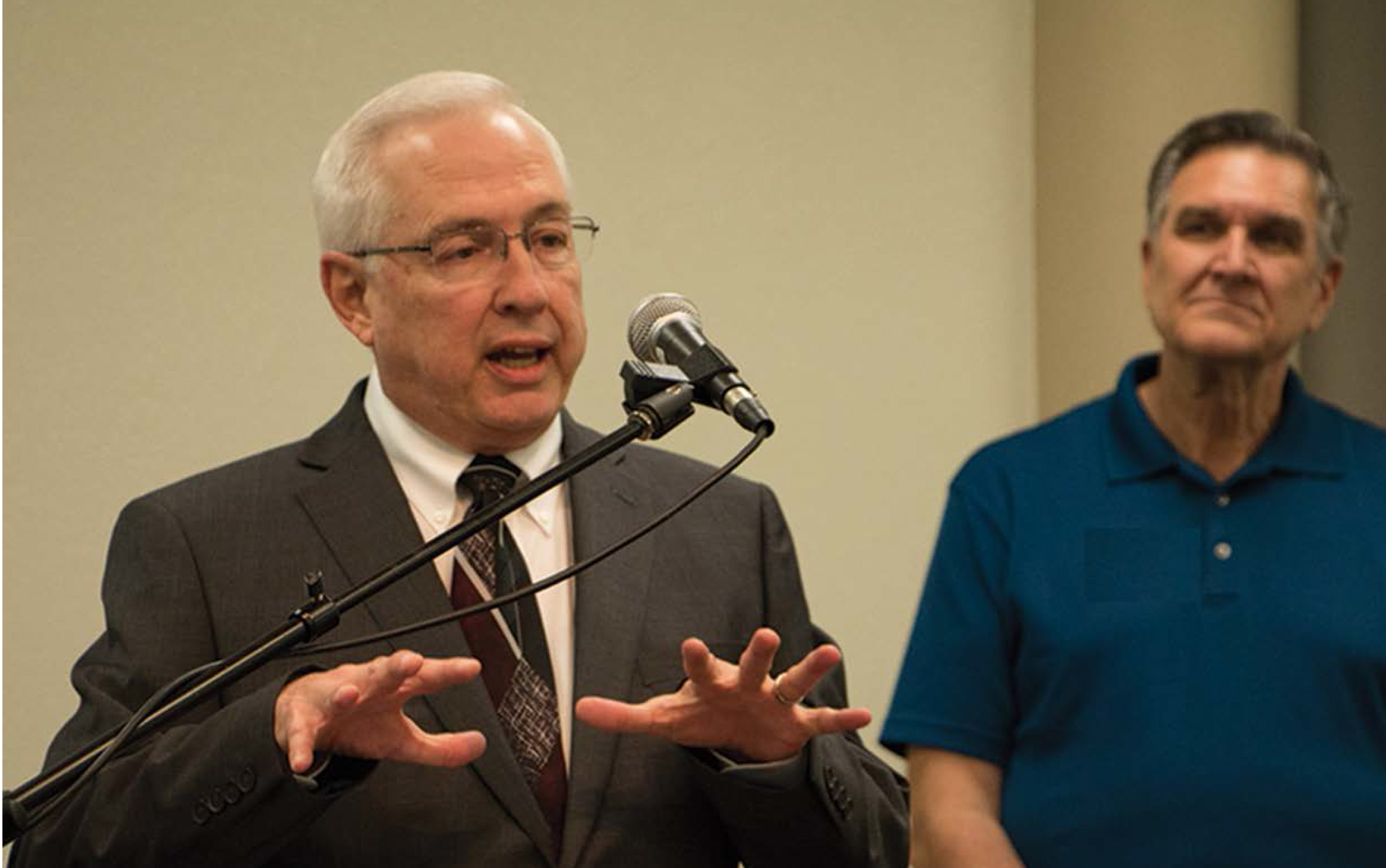 FRESNO — Bill Agee, newly elected executive director of California Southern Baptist Convention, believes “we have to put churches back at the top of the food chain” in order to win the “mindset battle” that CSBC is relevant.

“We’ve got to make sure everything we do helps resource the vision of the churches. They don’t exist for us. We should exist for them. If we help churches take the next step, I think we can do that,” the Oklahoma native told CSBC Executive Board members during a question and answer session before his election.

He is the eighth executive director of the 77-year-old entity.

Agee (pronounced “A-G”) said the mindset battle is probably the greatest challenge for any state Baptist convention in the nation today, not just CSBC.

Continuing the thought, he noted pastors and churches “don’t believe we are here to help them. The question is, how do we make them believe” we are their champion when they’ve heard it before “and the state convention didn’t deliver.”

“We (CSBC) ought to be like the wind — you should be able to see we’ve been here, but you don’t see us,” Agee said. “We need to help churches take the next step in their ministry to ‘dominate’ something in their community.

“It is all about the churches,” he declared. “The churches are the ‘pointy end’ of the spear in the battle. The state convention should be the supply line.”

Saying emphatically that his vision is to “dominate resourcing the vision of our churches, and differentiate ourselves by planting strong, healthy churches and revitalizing existing churches,” Agee added, “How that looks still is to be determined.”

“We need to help our churches in taking the next step. When you do that and you start helping churches with resourcing the vision and letting them know they’re not by themselves, you start winning the mindset battle.”

The result, Agee believes, is increased participation and increased giving.

He also believes CSBC should dominate and differentiate itself from a biblical perspective, noting scripture says to “love the Lord God with all our heart, mind and strength. We ought to dominate that relationship. Let God be first and be the top priority.”

Scripture also says to love your neighbor as yourself, Agee added. “I believe that’s how we ought to differentiate ourselves — in how much we love each other.”

If California Southern Baptists are right with God and right with their brothers, Agee concluded, “things will take care of themselves.”

Sharing part of his personal testimony, Agee said he was the first person on either side of his family to become a Christian. He made a profession of faith as a sophomore in high school when a friend invited him to a revival meeting. Initially wanting to be a veterinarian, Agee enrolled in a state school, but instead graduated from Oklahoma Baptist University where God called him into ministry during his freshman year.

“God has been preparing me every step of the way for the next step,” Agee said. “I see in California great challenge and I want my last days in ministry being worthwhile, to meet the challenge.”

While he doesn’t have “all the pieces of the puzzle. No leader does,” Agee said a good leader “goes into a situation, assesses it, puts together a plan, staffs to the vision, implements, follows up and does it all over again.”

“It doesn’t matter if you are from Cleveland or California,” he said, “that is what a leader does — leads!”

Agee confidently told Board members, “Leadership is something I can bring to the table.

“I’ve told these guys (search committee members) that I’ve got six or seven years and if we can’t see a culture begin to shift, you need someone else.

“But if you can see a culture begin to shift, you need someone else!” he quipped.

In a later briefing with Convention staff, Agee encouraged them, saying, “I’m not here to blow up the ship and die! I want you to understand the vision. I want to get to know you and I want you to know me. I want to share the vision of where we are headed.”

He added that staff would clearly know what that vision is and why “we are doing what we are doing. If you know why we are doing something, it makes change a lot easier. I want to help you understand where we are going as much as possible.”

He also suggested change would be the “norm.”

“We are not going to change just to be changing,” he added, “but because of where we are going, which will result in good, positive results. Let’s work together and see what happens!

“I’m not a maintenance guy,” Agee concluded. “I don’t feel good spinning the plates. I love the challenge. Give me the hill with the giants on it.

“What better hill than California with 34 million who don’t know Jesus?!”