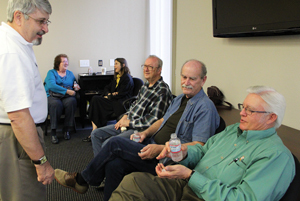 FRESNO – When Don Hargis was hired by California Southern Baptist Convention in March 1992, the Convention boasted a grand total of 100 trained Disaster Relief volunteers, and Don’s supervisor reassured him, “Don’t worry; Disaster Relief won’t take much of your time.”

Fast-forward to 2013: California Southern Baptist Disaster Relief Ministries consists of 55 units (including six for cleanup), more than 4,000 trained volunteers (including 750 chaplains), and the ability to provide 100,000 meals per day from the kitchens.

Talk about an understatement.

From March 1992 to last month, Hargis served the state convention in the areas of Disaster Relief, missions education, church recreation and men’s ministries of every sort. He is now pastor of Sierra Heights Baptist Church in Fresno.

“God used me for 21 years to build a ministry for Him that He continues to blow me away with,” said Hargis, who was born in Chico but moved often through his childhood as a “military brat.”

The turning point in Disaster Relief, Hargis said, occurred about seven years ago in the wake of the massively destructive wildfires that swept Southern California – over a million acres and almost 4,000 homes destroyed or damaged.

“At that time, when we showed up after a disaster, government agencies just looked at us and went, ‘Who are you? We don’t know who you are or why we should trust you,'” he explained.

“During this incident, we had two Indian tribes who asked us to come to their reservations and clean homes, and their reaction to our work was, ‘Wow, you guys do just as good as FEMA (Federal Emergency Management Agency) – even better!’

“Well, the state took note of that, and FEMA too, and now we’re not only invited, we’re consulted! We’re on the governor’s plan for disaster relief and invited to all the mass care planning meetings.

Hargis is also quick to point out the vital work of his 12-member steering committee – “the heart and soul of our Disaster Relief people” – who meet three to four times a year to guide Disaster Relief work.

STRAM Camp
While he concedes that most people would cite the growth in Disaster Relief as his chief contribution to California Southern Baptist work, Hargis added a heartfelt inclusion of men’s ministry and STRAM Camp.

Hargis began STRAM (State Recreational Adventure Mountain/Marine) his first summer with the Convention. The camp is offered one week each summer for children, and two weeks for youth.

“STRAM Camp specializes in team-building, stretching people by putting them in life-endangering situations, to teach them trust and faith in their own abilities and especially in God’s,” Hargis explained.

He has used STRAM to achieve multiple goals simultaneously. For one, the camp is a venue for training Disaster Relief volunteers in mass feeding. Second, and in an effort to increase missions education (a component of his ministry), Hargis includes a camp missionary at each event.

“It was the best thing I did for STRAM Camp, and all the churches who came really enjoyed having that person there,” he said.

Hargis confessed that missions education has been one of the most challenging aspects of his ministry at the state level.

“It is still difficult. I want churches to understand boys need to be boys and girls need to be girls, that how you teach missions is different for each. I’ve begun focusing more on the idea of missions discipleship – that is, how do you disciple your folks in the area of missions?

Men’s Ministry
“One of my goals in pastoring now is to bring missions discipleship to the local church, train folks in how to be a good disciple in the area of missions.”

Working with men’s ministries has had its challenges as well.

“One of the problems is we expect men to change overnight,” Hargis explained, “and they’re just not going to. I’ve tried to help churches reach out to their men in different ways. I’ve tried to help them use the movement of Promise Keepers, and the Men’s Fraternity focus has been most helpful in the last few years. I’ve used that to train about 200 churches in how to disciple their men.”

He also has taught the concepts in the popular book, “Why Men Hate Going to Church,” to women’s groups.

He served as an interim pastor for 12 churches during his 21 years at the Convention, and for the last six years said he felt more and more impressed about returning to the pulpit.

“I just kept saying, ‘God, if you want me to go back, open the doors and keep them open,’ and now that’s what He’s done.”

Hargis will continue to work with CSBC to lead Disaster Relief and STRAM Camp for 2013.

And no doubt will continue to be.