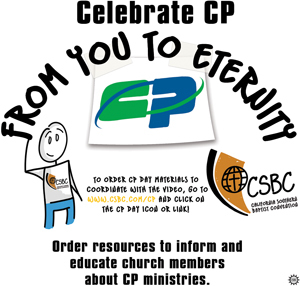 .
The Cooperative Program is the way Southern Baptists work together to support the expansion of God’s Kingdom locally, nationally and globally.

Good Community Church, a Korean congregation in Torrance where Paul Kim is pastor, has maintained its CP percentage rate – but the church has doubled in size, to more than 1,000 in Sunday morning worship, and offerings also have substantially increased.

Primera Baptist Church, an Hispanic congregation in San Jose where Frank Ciprian has been pastor 35 years, deliberately doubled its percentage, to 10 percent of undesignated offerings

St. James Holy Missionary Baptist Church, an African-American congregation in Sacramento, started and led since 1969 by Robert Lambert, has no explanation for their increase except a faithful congregation that responds to God’s direction, the pastor said.

“These churches reflect the commitment to partner with other Southern Baptist congregations to reach the lost and make disciples,” said Ferm¡n A. Whittaker, California Southern Baptist Convention executive director. “We must never forget to celebrate the sacrifices of all our churches.”

Three churches. Three ethnicities. Three ways of increasing their giving to missions through the Cooperative Program.

Ashley continued, “These churches are living out a long-held Southern Baptist guiding principle: ‘We can do more together than we can do alone!'”

Good Community Church was organized in 1991. By 2007, it had grown to 500 people participating in Sunday morning worship led by Pastor Paul Kim. The church gave token acknowledgment of its tie to Southern Baptists by giving $1,200 a year – $100 a month – to missions through CP.

Missions was important then as now, but most of the offerings went to independent missionaries in Korea, South America, the Middle-East and elsewhere.

Pastor Kim became aware over the latter part of the first decade of the 21st century that the church didn’t have a good accountability and financial integrity system for all the missions support they were doing.

At the same time, he was growing closer to other pastors and leaders in the SBC, and realized it provided all the accountability, financial integrity, missions zeal and doctrinal purity of which Good Community Church wanted to be part.

Good Community has doubled in size, to 1,000 participants in a total of five Sunday services for Koreans. That doesn’t count the Hispanic and Japanese congregations that use Good Community’s building rent-free.

Members are encouraged to participate in missions and ministry locally and further afield, such as a homeless ministry in downtown Los Angeles twice a month, random acts of kindness and helping at smaller churches, as well as participating in North American and overseas missions trips.

“Our church focuses on two things: worship and prayer,” said David Yoon, English ministry pastor. “Early morning prayer really sets the tone for what the mission and vision of the church is. Families who join the church really want to come on board and share in that vision.

“We have 500 of 1,200 members who are 18 and under,” Yoon continued. “The main message is denying yourself and taking up the cross. In the last five years, that message has really penetrated these families, and they are giving that vision to their children.”

Good Community Church now allocates the majority of its mission dollars through Southern Baptists and gives 5 percent to missions through the Cooperative Program. In 2013 the congregation contributed $33,000 through CP.

It also has become, over the last five years, a North American Mission Board Asian Multiplying Church Center, a hub for equipping young leaders.

Primera Baptist Church in San Jose was organized in 1948. Frank Ciprian has been pastor for 35 years of what today is about 175 people gathering in one of two worship services: one in Spanish, another in English.

“We even have two of all the major ministries of our church – Sunday school, discipleship, WMU, brotherhood, music, pastoral – one in English and the other in Spanish,” Ciprian said. “The missions leaders – WMU, FEMENIL – are truly dedicated to state and foreign missions, and have used Convention videos and special speakers and programs to inform and inspire our church. I have had to do very little to motivate the leaders and the church to give.”

Primera gave 5 percent of undesignated offerings in 2007 to missions through the Cooperative Program. That totaled $7,497. The church increased its CP giving by 1 percent a year, until in 2012 they were giving 10 percent, $15,755.

“As a Southern Baptist attender, church member and pastor, I have never learned of a better way than the Cooperative Program to meet the needs of all of our churches,” Ciprian said. “I know we can always improve what we have – and we should continue doing that – but on the whole, the Cooperative Program is a true blessing to all who receive from it and who support it.

“I also like the fact that CP provides pastors with a free week at Jenness Park every year,” the pastor grinned. “I try to take advantage of that every year.”

“I believe the Lord is blessing the church in a variety of ways,” Ciprian said. “My wife Anita and I both see that the church is in good spiritual shape. We have a very good group of leaders among the Spanish and English congregations.”

He credits his training at Golden Gate Baptist Theological Seminary “to prepare me for the pastorate,” and the 20 years of (Contextualized Leadership Development) classes taken by church members. “This has made a big difference in the theological growth of Primera,” the pastor said.

“One area where we see God clearly working is through a new ministry called ‘Kids Club,” Ciprian said. “Baldwin Elementary School gave our church permission to teach the Bible to their students once a week …This is our second year and about 70 kids voluntarily attend. From there we have the opportunity to contact their parents and work with them.”

Robert Lambert is 84, married to his second-grade sweetheart Christina for 66 years. They were young when they started St. James Holy Missionary Baptist Church in Sacramento in 1969; today they’re teaching young people what they knew by that age as the result of an entire community looking after the youth, the pastor said.

“Today’s young people don’t learn right from wrong at home or in school,” Lambert lamented. “We work hard with our kids. We tell them, ‘Everybody’s equal.’

“We teach our folks to become missions-minded,” the pastor continued. “We intend every year to do more than we did last year…. We believe in tithing. We give. We have our young kids (in the church) and we train those kids to give. They’re on fire for giving!”

On the first Sunday of each month, children and teens take their offerings to the front of the church, Lambert explained.

“I don’t do fundraising,” he said. “No rallies. No programs. You just give what God tells you to give. … You can’t beat God giving; you’d have nothing without Him.

“I just believe God from the get-go,” Lambert continued. “The Bible is so simple to me: the Holy Spirit is in charge of the church. That’s it. You can’t do nothing without the Holy Spirit.”

While the church majors on developing its youth, community ministries include feeding the homeless the fourth Saturday of the month.

“We deal with people we come in contact with,” Lambert continued. “We advocate Christ. He’s hope; He loves you. Without Him you don’t have no life. … We can’t give enough to God for what He’s done for us.”

When God told him to organize St. James, he started with just his wife and their two youngsters. “I felt led to go to Southern Baptists; they had all that training and I didn’t know what to do. But I wanted to do something,” Lambert said.

“The more we give, the more He gives, and we never stopped giving. I wasn’t pressuring nobody. We just kept giving and the Lord kept giving.”

The church continued to give its tithe even during economic downturns.

“Keep on trusting,” Lambert said. “I believe it so strongly because He said, ‘I’ll never leave you nor forsake you.'”