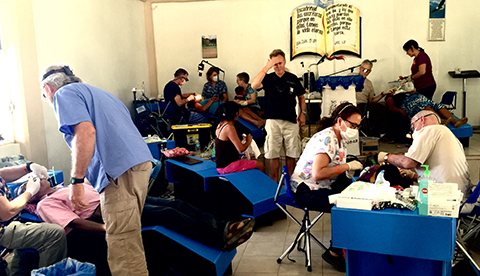 HOLTVILLE — Trinity Baptist Church in Holtville sits 10 miles from the Mexican border, but this story isn’t about immigration, the need (or lack) of a wall or border ministry.

It’s much bigger than that.

“That’s what Jesus told us to do,” Moore added, referring to the discipleship that has grown the church from the 50 who attended 38 years ago, to two language-specific congregations that together have sent out members to minister in California, Tennessee, Mexico, South America, Haiti, Thailand, Uganda and Zambia.

Trinity allocates about 40 percent of its budget to missions, which includes contributing 6 percent of undesignated receipts to the Southern Baptist Convention Cooperative Program.

Among the church’s major endeavors: Grace and Truth Ministries in Mexico, Trinity Baptist Restoration Center in Holtville, the Center for Christian Missions in Zambia, Disciple Thailand in that Southeast Asian country; and for Holtville children, Awana and the Noah’s Ark Preschool and Daycare.

The church also serves as a starting point for other congregations that want to be involved in missions south of the US/Mexico border. These churches join with Trinity and the parachurch partnerships it has formed over the years.

Moore and his wife moved from Tennessee to Holtville thinking they’d learn Spanish and then move to Central America.

“But God had a better plan,” he said. “Because of all these open doors, we decided to stay here in Holtville.”

The Imperial Valley city has a population of about 6,000, at least 75 percent of whom are Hispanic.

Moore, who taught himself Spanish, said he never asks people about their legal status, but rather about their spiritual status.

“I know Jesus is the answer for all their needs, not the USA,” Moore said.

As Trinity sees opportunities, members do what they can to help, which leads to evangelism and then discipleship.

“We want to reach out to our community, but also to plant and strengthen other churches and to keep making disciples,” Moore said.

In July the church helped start its fourth Hispanic congregation in Tennessee. In August they’re taking 20 men to Peru to work with a church in Lima that is planting a new church in Cerro Azul. The men will do construction work in the mornings and evangelism and discipleship in the evenings.

Trinity 10 years ago started and continues to provide for an orphanage called Casa Hogar Gracia y Verdad, where about 20 children live in the border town of Mexicali. It also has built orphanages elsewhere in Mexico, and in Guatemala and Haiti.

“Down through the years we’ve done ministries in a small way, but now in a bigger way because people have become discipled and are doing the work of Jesus,” Moore explained. “It’s beautiful to see both languages working together to do Kingdom work.”

The church’s website — holtvillebaptist.com — delineates the multiple ministries manned by its disciples.

A major area of ministry is the Mexican state of Oaxaca, near Guatemala, where Grace and Truth Ministries started going five years ago, in both January and in June. Often they do medical missions with around 50 medical professionals and their translators.

“We now work with government officials down there,” Moore said. “They help pay our expenses and give us complete freedom to share the gospel.

“Whatever we can do — we’ve done outreaches with veterinarians, with a NASA engineer who spoke about the space program; he was able to share his testimony on television — whatever we can do to lead someone to Christ, we’ll do it. If it’s not sinful, of course.”

“Also, we have a Bible institute here in Spanish for three hours on Tuesday nights,” Moore said. “It’s about practical topics: how to evangelize, plant churches, teach the Word, preach, how to disciple someone.

“Because we’ve done the discipleship, we’ve got 12 men in English and another 12 in Spanish who are pretty good preachers,” Moore continued. “It (their discipleship) has opened up this Kingdom opportunity. They’re busy, active, and God provides the funding. A lot of times that means just going across the border.”

On the other hand, it costs about $700 for one person to travel the 1,800 miles and stay for a week in Oaxaca.

The church has sent entire families to start churches in the Imperial Valley, in Tennessee and elsewhere, and they minister weekly to about 30 people at the Blossom Valley assisted living center, and lead a Sunday evening service for about 30 residents of Living Free Ministries and others in the community.

“We’re kind of isolated down here on the bor-

der,” Moore said. “These are ways we speak encouragement into peoples’ lives.”

“There are hundreds of little villages without a gospel witness,” Moore said about Mexico. “Our goal is that there is an evangelical, hopefully Baptist, church in every one of those communities.

“We don’t want people just in church, but people who are actively involved in making disciples, reaching people with the gospel so we can reproduce,” the pastor continued.